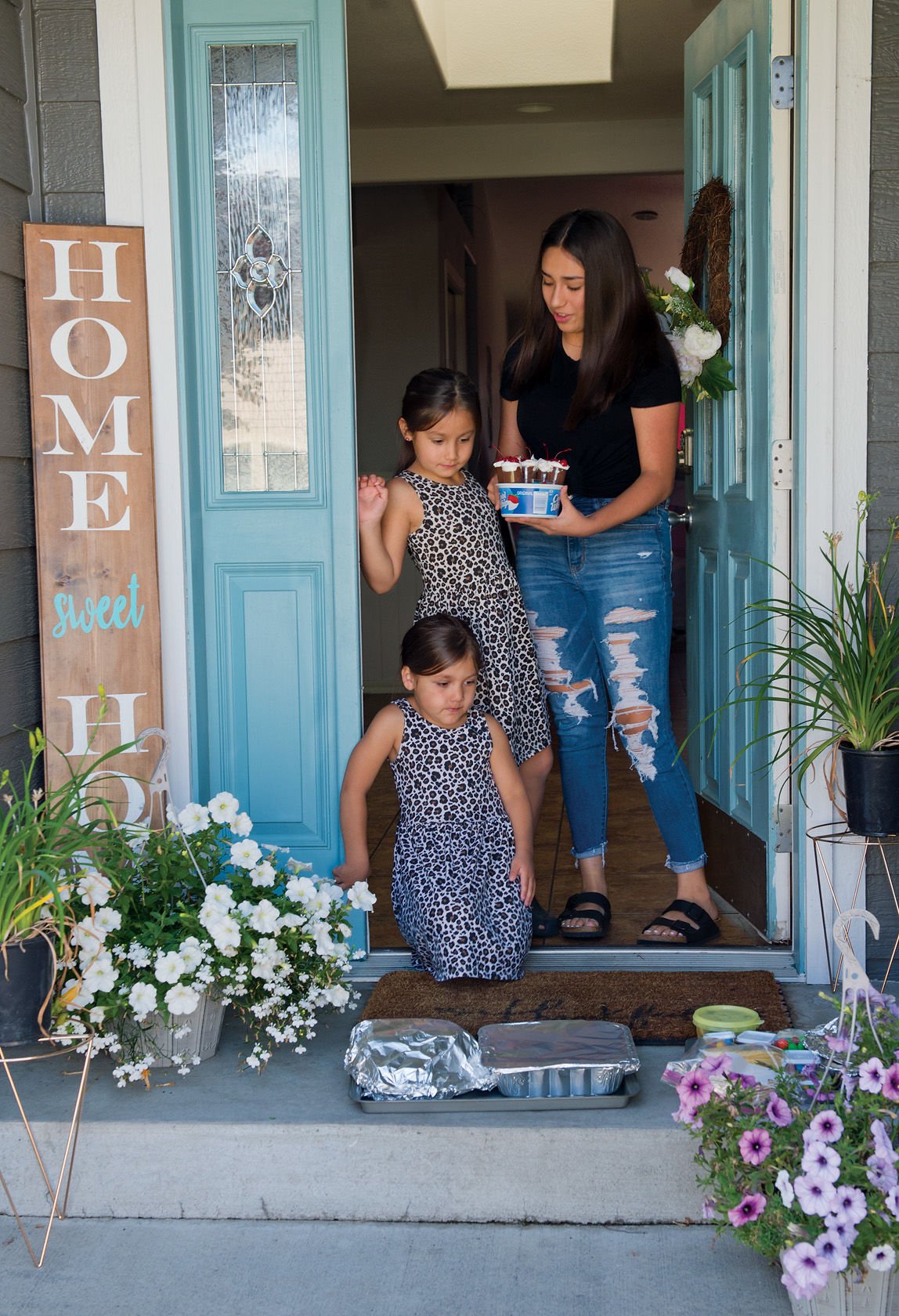 HOME SWEET HOME — Stacey Olivarez’s daughter Brielle, 13, accepts the chocolate pudding and next few meals on her family’s porch with her younger sisters, Addyson, 6, and Kenslie, 4, made with love by their great-grandmother, Sue Michaelsen while Olivarez recovers from double pneumonia stemming from COVID-19. 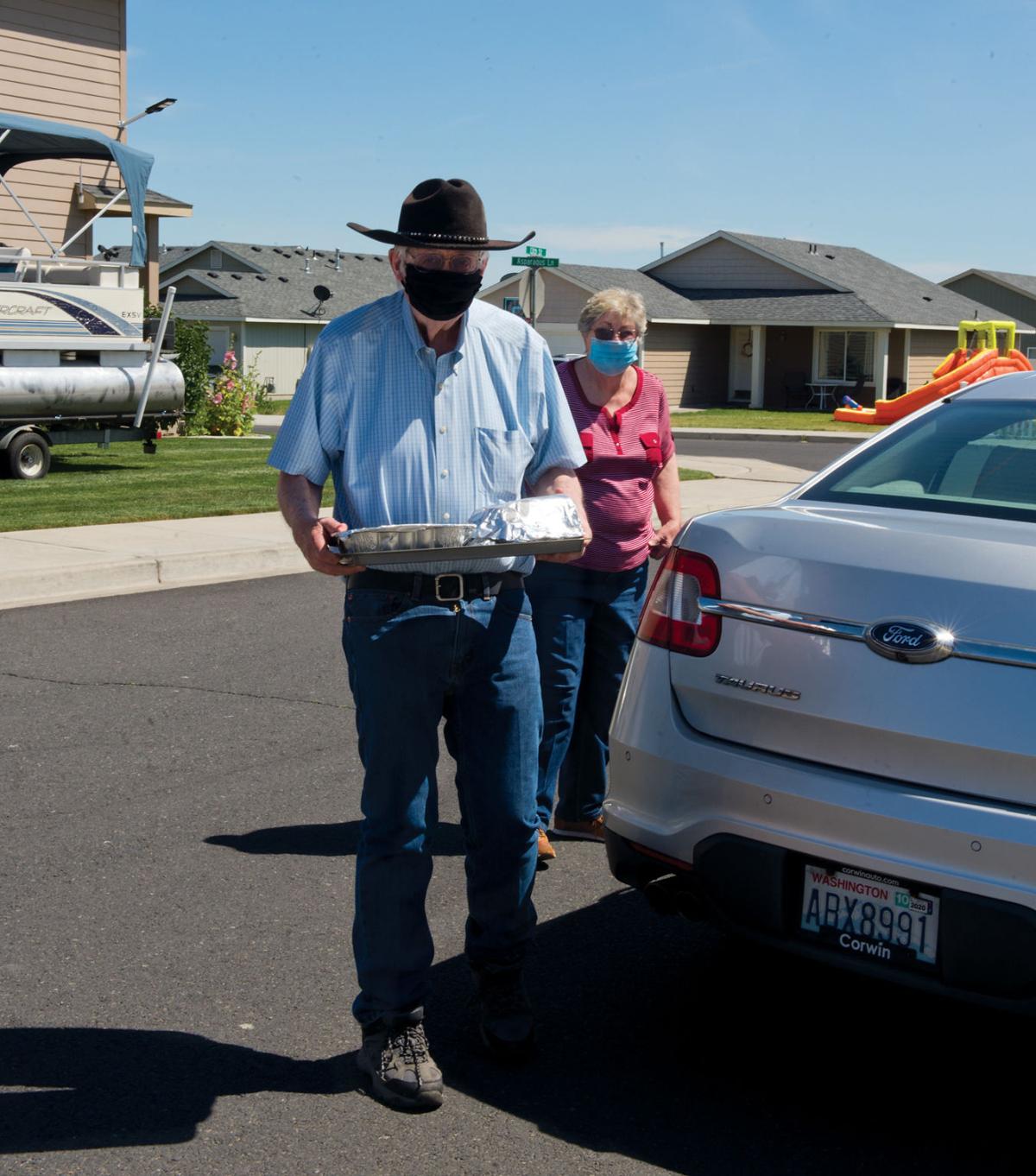 LOVE IN THE TIME OF COVID — Jerry Michaelsen leads the way as wife, Sue, follows bringing home-cooked meals made by Sue while her granddaughter Stacey Olivarez is quarantined with her three daughters and partner, Austin Arevalo.

HOME SWEET HOME — Stacey Olivarez’s daughter Brielle, 13, accepts the chocolate pudding and next few meals on her family’s porch with her younger sisters, Addyson, 6, and Kenslie, 4, made with love by their great-grandmother, Sue Michaelsen while Olivarez recovers from double pneumonia stemming from COVID-19.

LOVE IN THE TIME OF COVID — Jerry Michaelsen leads the way as wife, Sue, follows bringing home-cooked meals made by Sue while her granddaughter Stacey Olivarez is quarantined with her three daughters and partner, Austin Arevalo.

SUNNYSIDE — For mother of three, Stacey Olivarez, being bedridden with double pneumonia stemming from COVID-19 deprived her family of the home cooked meals they’re accustomed to – that’s when Olivarez’s grandmother, Sue Michaelsen, stepped in to take care of Olivarez, Olivarez’s partner and three young daughters.

“A mom is the head of the household and it’s not the same when a dad runs it,” Olivarez said of her partner Austin Arevalo with a chuckle. “My grandma felt bad and didn’t want them to live on frozen food.”

Michaelsen of Prosser did not hesitate to spring into action as soon as she heard of her granddaughter’s diagnosis and quarantine status. She began by bringing in two sets of lunches and dinners for the family of five.

Michaelsen and her husband, Jerry, have been dropping food on the porch every other day during Olivarez’s 14-day quarantine. After the drop off, the grandparents would return their vehicle, call the family, and wave at their great-granddaughters, Brielle, Addyson, and Kenslie waving back from the porch.

Olivarez has been taking the pandemic as seriously as possible due to her asthma making her more susceptible to attacks, especially during allergy season. She stressed that she would wear a mask in grocery stores, keep Clorox wipes in her car, constantly wiping down her purse, the steering wheel, commonly used surfaces in her home. She got tested early on because of her severe allergies as a precaution.

The initial test was negative for COVID-19. However, Olivarez expressed her allergy flare-ups required her to be seen by a doctor regularly and the realization that a close family member had been tested positive motivated Olivarez to get a second test with her eldest daughter, 13-year-old Brielle.

Brielle tested negative. Olivarez, however, did not.

The positive COVID‑19 test result came as a shock to the busy woman who did not experience the symptoms listed by the Yakima Health District.

Upon reflection, Olivarez admitted to often feeling shortness of breath, but this was not like incidents she had ever experienced before. “It wasn’t just asthma flare-ups, it was way more intense,” she elaborated, stating even cleaning her house gave her shortness of breath; something that hadn’t happened before.

“It was slowly progressing. I just didn’t see the signs.”

The quarantined mother detailed the symptoms she did feel. She painted a picture of severe chest pains, as if she were having a heart attack. “It hurt, it really hurt. I couldn’t shower for three days because even like walking to the shower, standing in the shower, I got out of breath.”

She then solemnly asserted, “I think experiencing it firsthand, like having COVID, it puts this whole situation into reality, into perspective. I wouldn’t wish this on anyone.”

Olivarez emphasized the importance of wearing a mask. She nervously laughed as she stated she didn’t want to start a political debate, yet truly believed everyone should wear a mask and her family will be taking the necessary precautions.

“This COVID situation is not a joke and is very serious,” she communicated “So glad the governor decided to put a mandate on masks in public.”

The on-the-go mother who usually works full time on the weekends at Community Living, almost full time as a substitute teacher while studying at college, in addition to raising three children is ready to be cleared out of quarantine. Olivarez expects to be cleared this week, exclaiming she’s “going on a family bike ride!”