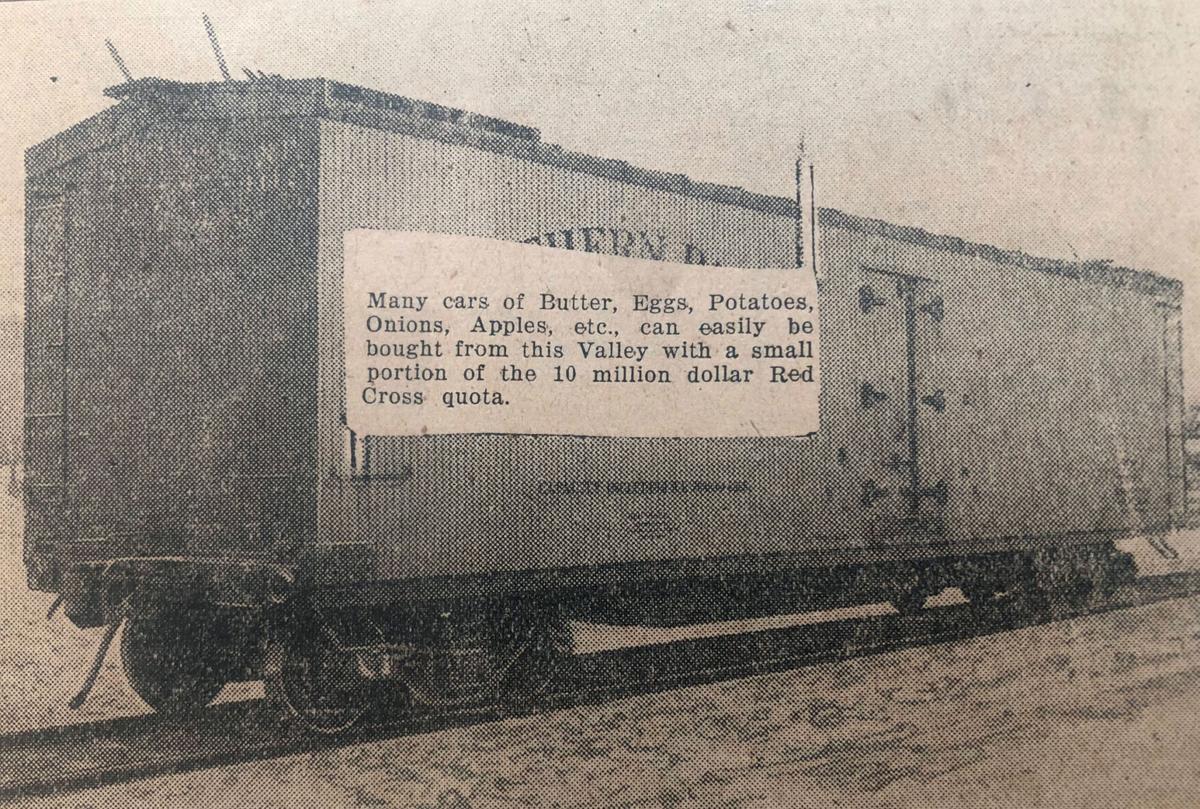 Jan. 29, 1931: BOXCAR PRODUCE — Many cars of butter, eggs, potatoes, onions, apples, etc., were easily bought from this valley with a small portion of the $10 million Red Cross quota. 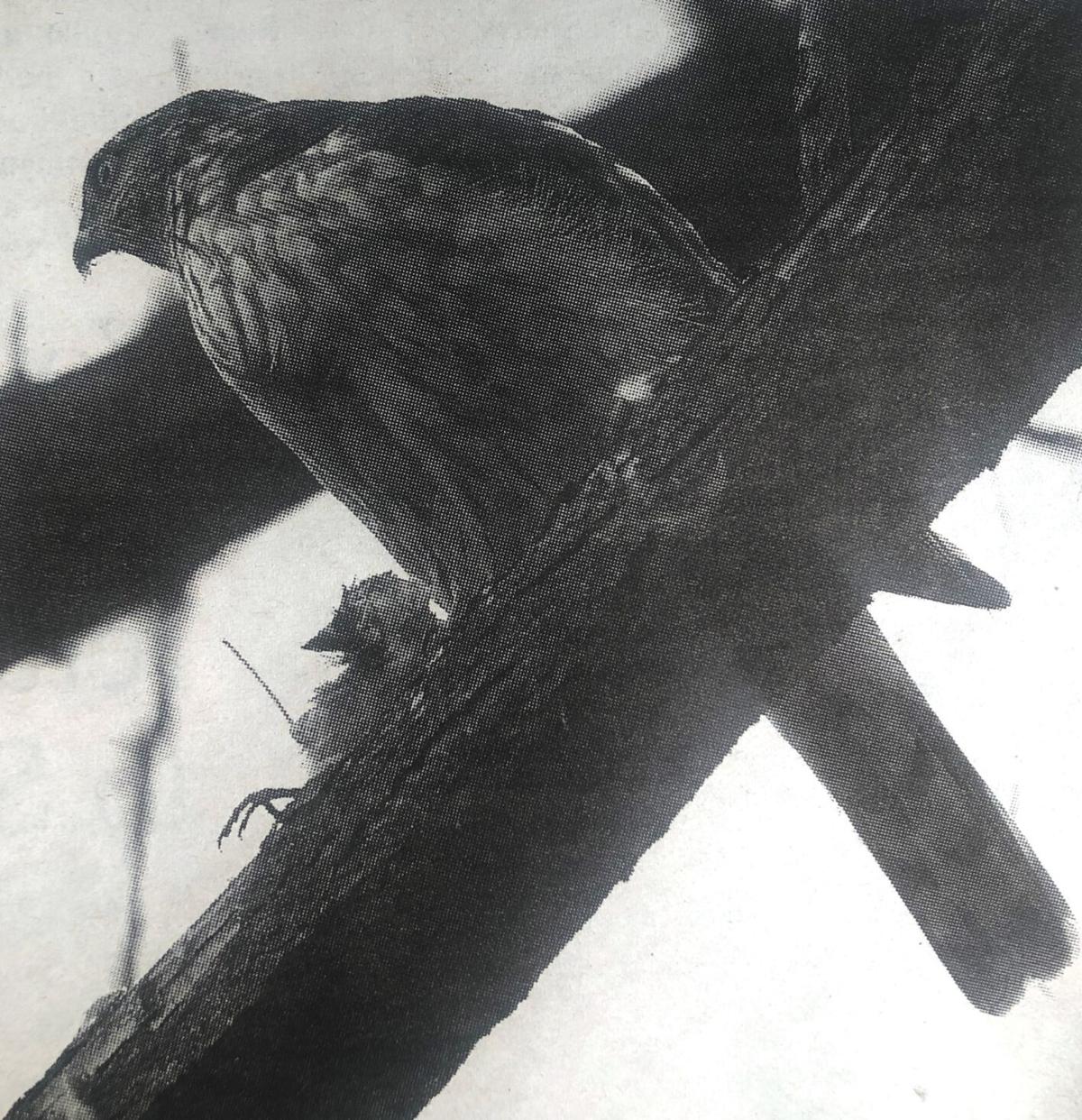 Jan. 27, 2011: WILDLIFE ART — A red tailed hawk perched on the branch of a tree in a Grandview neighborhood for an afternoon snack.

Jan. 29, 1931: BOXCAR PRODUCE — Many cars of butter, eggs, potatoes, onions, apples, etc., were easily bought from this valley with a small portion of the $10 million Red Cross quota.

Jan. 27, 2011: WILDLIFE ART — A red tailed hawk perched on the branch of a tree in a Grandview neighborhood for an afternoon snack.

Glancing back through the Sunnyside Sun pages, here is sampling of the stories published in past 100 years reflecting everything that made the Sun – the original voice of the community.

They drove through orchards between and were unanimous in their opinion that it was the grandest view of any farming district they had ever seen.

Jan. 27, 1921 – Governor Hart recommended the state fair at Yakima be discontinued and the land turned over to the City of Yakima. Believing this subject to be of vital interest to all of the people in Sunnyside, the Sun sent out questionnaires to several of its readers in order that they might express through the press their opinions relative to this matter. Below are given the statements received:

I think the Washington State Fair should be continued for the benefit of this country. If necessary, I am willing to make a donation to see that it continued. It is a fine advertisement for the state — George Hutchinson.

By all means discontinue the state fair. Why encourage farming and stock raising and boys’ and girls’ clubs when the farmers and stock-raiser and boys and girls have produced so much that they have impoverished themselves? — Wm. Hitchcock.

Jan. 29, 1931 – “Spend the Money for Produce for Drought Area” read the front-page headline with a picture of a railroad car and information below:

By all means collect the Red Cross quota for Yakima County, but after collecting it, let’s purchase produce from the farmers in the Valley to be sent by the Red Cross to the drought-stricken area. This will serve a two-fold purpose. It will help the farmers both there and here.

The men who were to be inducted on Feb 17 were:

Jan. 26, 1961 – Joining with 739 Sears Retail and 930 Catalogue Sales Stores throughout the country, the local Sears, Roebuck and Co. store would hold an open house Wednesday, Feb. 1, to signal the start of the company’s year-long 75th anniversary celebration.

A variety of highway improvements had been scheduled for the Lower Yakima Valley and Benton County, covering primarily the area of the 8th legislative district.

The Sunnyside Historical Museum noted its grand opening June 19, the same day the annual picnic was held in Sunnyside.

Jan. 28, 1981 – The Yakima County Sheriff’s Department was investigating the shooting of two horses belonging to Frank Beard of Sunnyside who raised bucking stock for rodeos.

Jan. 28, 1991 – The front-page photo cutline of Bob and Bernie Barker and their daughter Lynsey, former Sunnysiders, stated they lived and taught in Saudi Arabia. They reported that they were stationed far away from the fighting.

“We feel pretty safe here. No Scud missiles have rained down on us and school is still open.”

That was the message Bernie Barker relayed in a telephone interview that morning with the Daily Sun News.

Jan. 29, 2001 – In keeping to the commitment that all children can learn, Sunnyside School District will offer yet another alternative to the traditional classroom setting.

“In an effort to keep more middle school-age children in school, we have initiated an alternative school at the middle school level,” said Gary Babcock, administrator at PRIDE High School.

Jan. 27, 2011 – Sunnyside Police Officer Scott Orate and Corrections Officer Drew Gutierrez were two of the City’s finest. Both held strongly the belief in supporting fellow officers and representing the police department in a professional and positive manner.