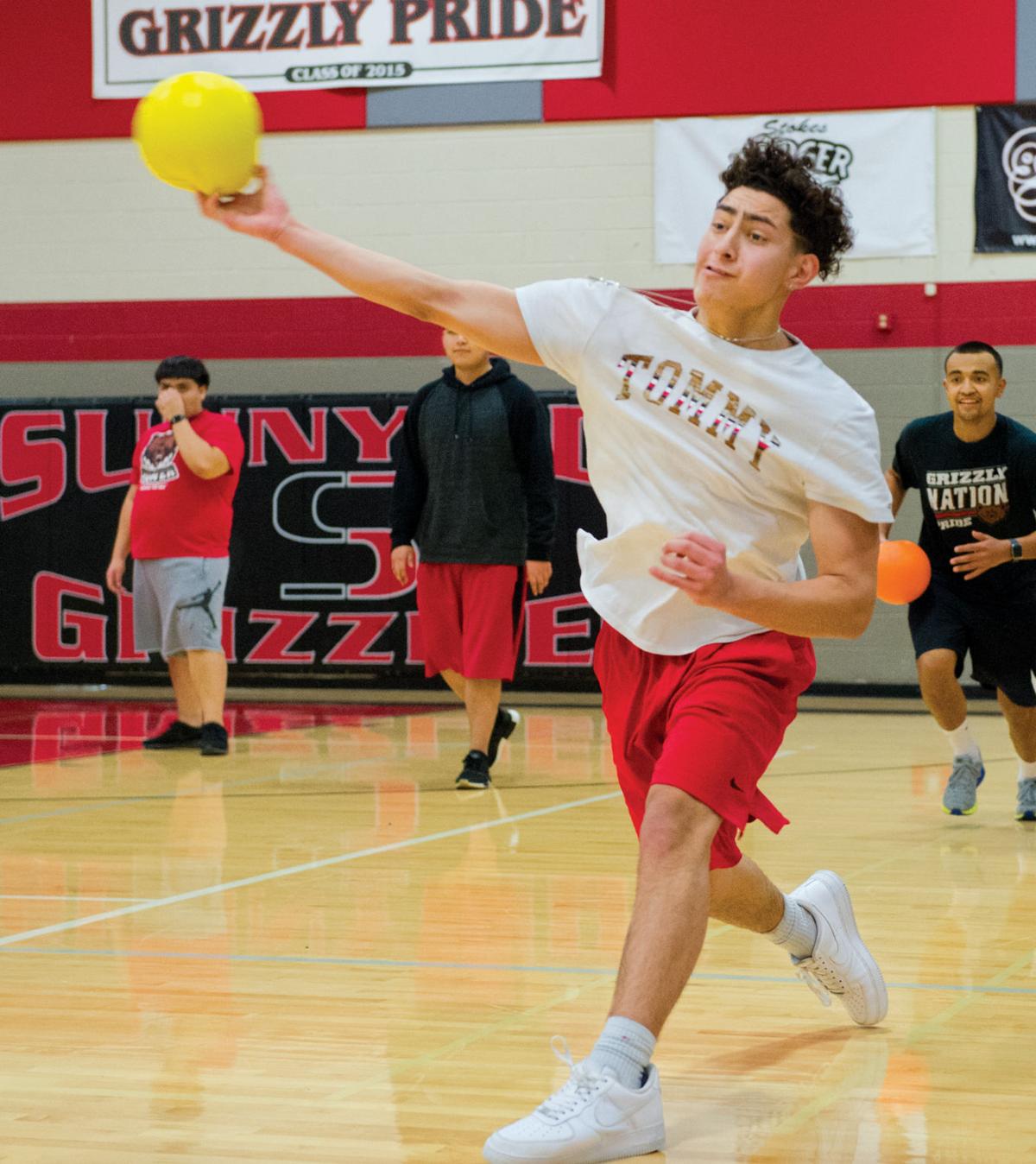 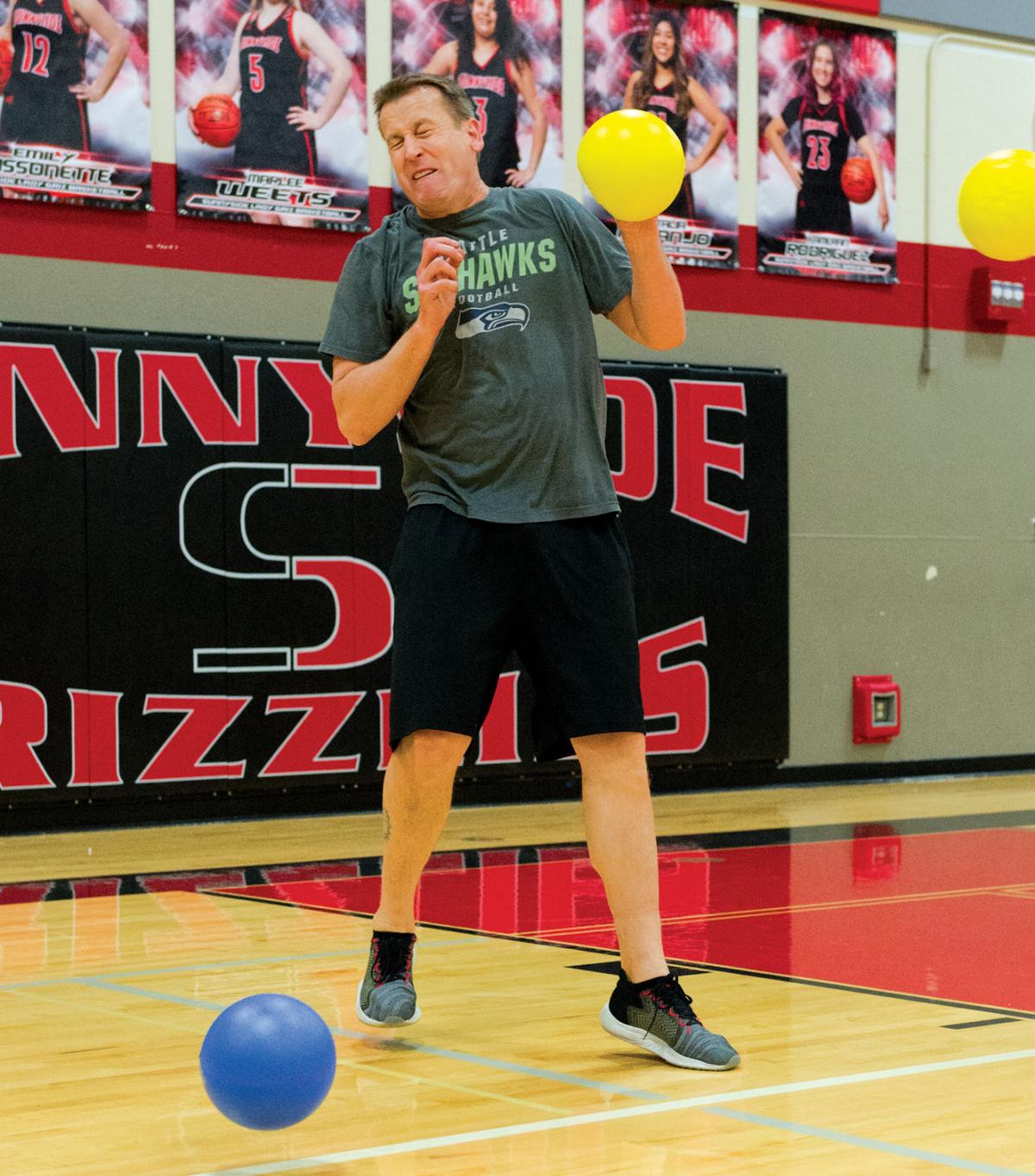 SUNNYSIDE — 17 senior boys were selected by their classmates to compete for the title of Mr. SHS as they raise funds through an assortment of entertaining and challenging activities for the Yakima Children’s Village through Virginia Mason Memorial Health prior to the 12th annual “Sponge Bob Squarepants” theme pageant and talent show on Saturday, March 21.

This year, the group’s goal is to raise $7,500 and they are about halfway there. “The biggest fundraiser we’ve done so far was the Dutch Bros Coffee cards. They’re an amazing supporter of this high school,” Leadership Advisor Tina Peabody stated. “The boys sold $10 and $20 cards and we were able to keep 40 percent of whatever we sold… They sold over $4,000 worth of cards.”

In the spirit of athletic team competition, along with an opportunity to see campus faculty and staff members, led by Principal Ryan Maxwell take on the Mr. SHS candidates for a friendly contest of dodgeball to benefit the group’s campaign goal.

Inside the gym before a rambunctious audience on Wednesday, Jan. 29, two teams of dodge ball participants stretched out and loosened up their lively arms. There were a few misfired balls thrown from both sides which struck opposing members, signifying game on.

Assistant Principal Dave Martinez went on record that the game would be played under international rules in a best of three game series and would be conducted by his authority since he had the microphone.

Both teams were introduced to the paying crowd craving a fierce battle of epic sporting performance or specialty made “Hurricane” energy drink available for purchase on the sideline.

An official spectrum of multicolored dodgeballs was lined up along half court. Teams started behind the basketball baseline on their respective sides. Martinez counted down from three and the game began.

Players rushed out to grab at least one ball as both teams started chucking balls to hit their adversaries, while trying to avoid being struck themselves.

“It’s cool seeing the kids grow and helping the community,” Maxwell acknowledged after an intense winner take all fourth game. “They keep on throwing these new competitions in which I enjoy. Basketball and then dodgeball, so I’m waiting for what’s next!”

The objective of the game for each team was to eliminate all members of the opposing team by hitting them with thrown balls or catching a ball thrown by an opponent. Leaving the court, Senior Adam Sanchez targeted a fellow candidate with a ball and struck him squarely in the back, an opportunity he couldn’t pass up.

“He offered me a dollar to hit his brother, so I did it,” exclaimed Sanchez as the group walked off the court following their dodgeball battle with staff. He pledged that the proceed would go to the Children’s Village fund.

The outgoing football player announced he has decided what his talent for the upcoming show was going to be but wouldn’t divulge all the details. “I’m just going to say, ‘the king of pop.’”

The talent show winner will move on to compete for Mr. Capitol against other Yakima area schools on Thursday, March 26.

“They’ve taken a tour of Children’s Village. They’ve done a day called ‘slug bugs’ where they play games with the kids who are receiving services there,” Peabody said. “Next week they’ll go to the NICU (Neonatal Intensive Care Unit) on Monday to see how the money is used.”