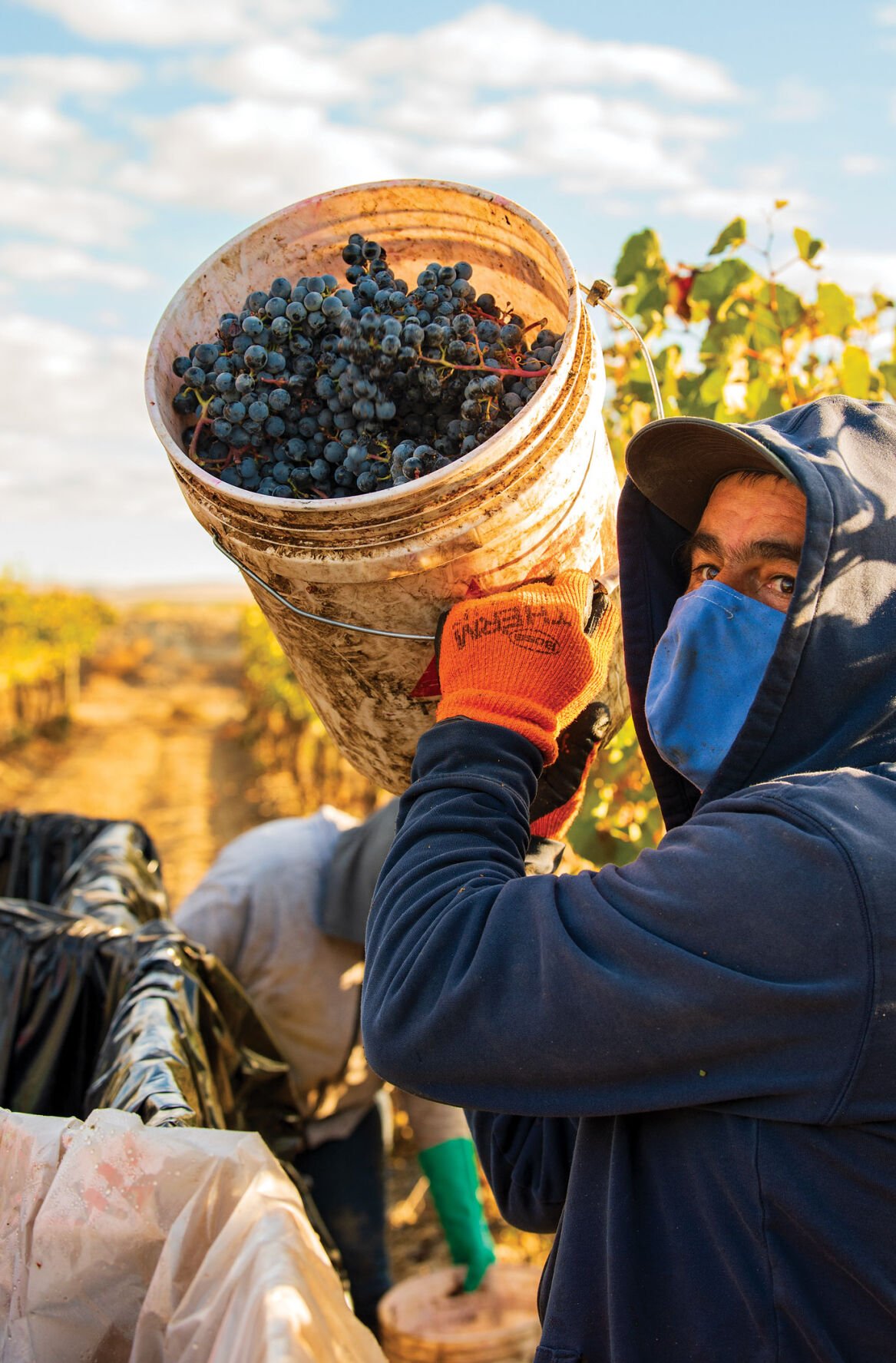 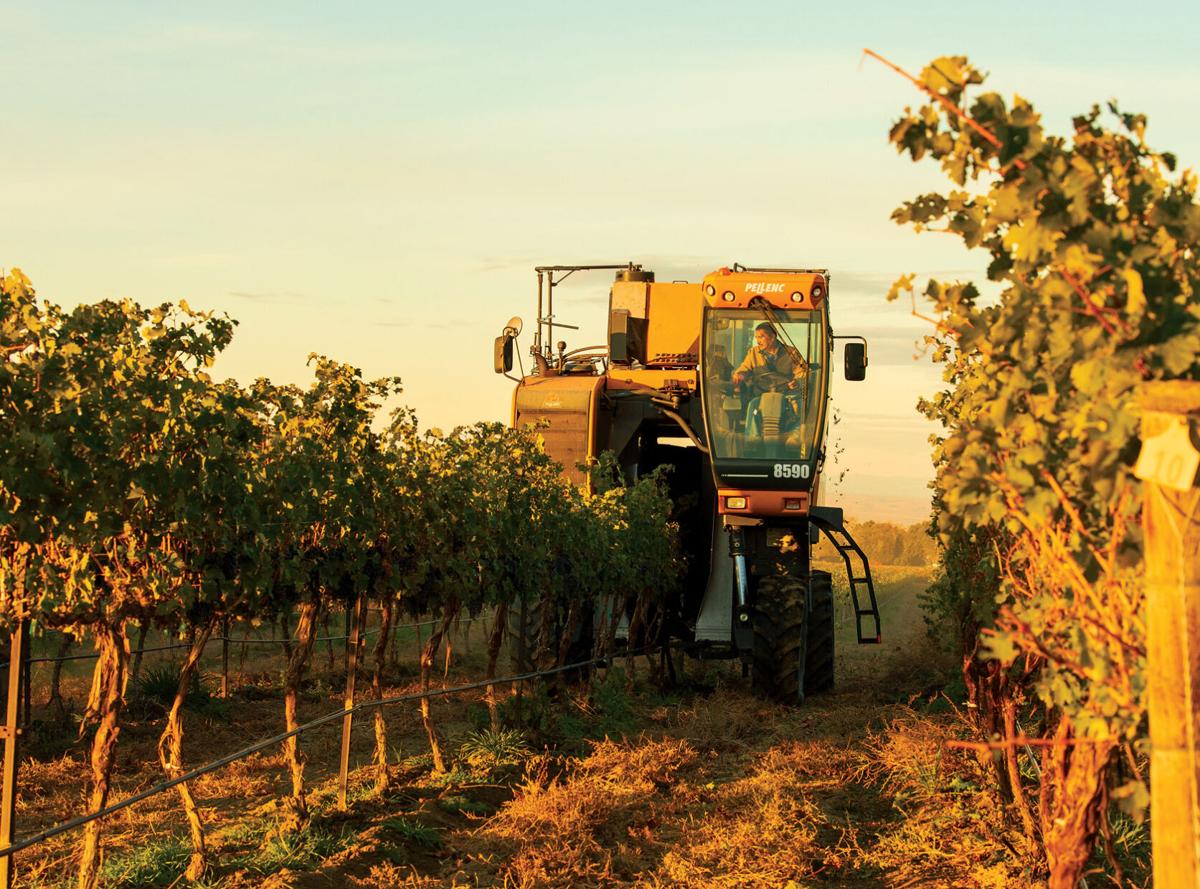 Giant grape harvester pauses at the end of a row in the afternoon light before starting to collect yet another round of fragrant, colorful grapes.

SUNNYSIDE — Airfield Estate Winery’s harvest has been soaring to flavorful heights this season while vineyard and winemaking crews were strategically mobilized to deliver an on-time October payload of more than 420 tons of fruit during the week leading up to the lower valley’s first frost.

Balancing ultimate ripening times with fall harvesting operations propels Marcus Miller, owner and president of his family’s fourth generation winery, along with winemaker Travis Maple, to launch synchronized plans for bringing in 830 acres with over 20 varietals of grapes by Halloween.

“We always try to give the grapes as much hang time as possible. You feel like you’ve done your job when you can let them hang and hang and have days on the vine,” Miller warmly reflected while walking through the premium parcel of reserve Cab Franc on Friday, Oct. 2.

“Travis can’t, in the cellar, produce ripeness. It takes the sun and hang time to achieve that perfect ripeness level. So, I need to make sure that especially the most important blocks are hitting that on the money,” the vintner favorably conveyed.

The flavorful taste called to mind words of wisdom that trusted winemakers had imparted on him from the time he was an adventurous viticulture student and working a harvest in New Zealand to creating his family’s signature blends while elevating the complexity of their wines.

The 80 degree temperatures in late September and early October have been an unexpected surprise as indicated over the past five years of weather patterns, according to Miller. “It’s always trying to balance the best winemaking you can possibly do with the need to process a specific amount of tons in a certain time frame.”

During the same seven day stretch last year, the high was only 43 degrees and the lower valley would experience their first freeze, prohibiting additional ripening and further development of flavorful profiles.

Ripening at this time of the year is unheard of, which has contributed to the uplifting excitement about this year’s “rock star” vintage, Miller enthusiastically stated. “When we can get this fruit really ripe, game on. It’s going to be killer!”

The family shares a distinguished bond within the natural surroundings of the area where a portion of the land was a training base for hundreds of Army Air Corps pilots during World War II.

Original landmark buildings continue to serve the winery in a role which connects their iconic past with a revered future for high-flying success. “It’s really fun to now have our future across the street from where our past was,” Miller described while gesturing in the direction of the mess hall’s close proximity and where he was born.

Over the course of the last 19 days, vineyard crews were in full swing as they utilized Pellenc harvesting machinery to navigate through the rows of mature grapes while lifting them off from their nurturing environment.

“If you slack in the vineyard, it doesn’t matter how good your processing is, you’ve got to do it in both ends,” Miller expressed. “We expect and our customers expect whatever wine they’re buying from us has to be tremendous. And with 1,000 wineries in the state, it has to be.”

Grapes travel into the burnt orange colored, French engineered harvester by way of conveyor belts. They are cleaned, destemmed and separated from MOG (material other than grapes) where it’s blown out the back. Two onboard stainless steel bins store the berries.

Tractors hauling hydraulic gondolas, which can carry about nine tons of grapes, alternate back and forth from the field to the winery in support of around the clock harvest operations.

Airfield’s advanced processing activities with Pellenc optical sorter technologies were simultaneously taking place with the overall goal in preserving the purity of the fruit as it ferments for seven to 10 days at the bustling facility.

Once the primary fermentation process – when juice becomes alcohol after yeasts transform sugars – present in the liquid into ethanol and carbon dioxide as a by-product have occurred, the wine is then transferred to tanks or bladders.

“As soon as you get that first frost warning, things get kicked into high gear. Last Friday (Oct. 16) was when we started to pick up production trying to get a minimum of 70 to 100 tons done per day,” Maple explained on Wednesday morning, Oct. 21.

They expected to be in good position with plans to have all their high-end grapes in the building by the end of the day, Maple said. “The quality of the fruit looks exceptional and we’re happy to be able to get them off the vines before the freeze.”

Maple added, “It’s quite the rush to beat Mother Nature but again, I think with the hard work or our vineyard and winemaking teams, it’s taxing both mentally and physically but once the grapes are all in the building, it’s all worth it to us.”

Following their 16 hour day of picking about 160 tons of Chardonnay for Chateau Ste. Michelle and 40 tons, which were two loads worth for themselves, Miller reported outside the winery’s office later that evening.

He pointed out there were two machine loads of Chardonnay remaining for Washington state’s oldest winery. Eight additional tons were brought into Airfield’s facility on Thursday morning and acknowledged, “That will end the Chardonnay harvest and all the whites on the farm are done.”

Handpicking crews bundled up and drenched in early morning radiance began bringing in about 60 tons of Cabernet Sauvignon grapes that were still left out in the vineyard in the wake of the frost. Some production Cab blocks also remained which would fill a 35,000 ton tank inside the facility by the end of the day, Miller indicated.

Reserve Cab lots are waiting to be picked which are meant for special tanks and unique co-fermenting purposes that will be blended with extra special Merlots and Cab Francs and fermented in concrete tanks, he noted.

“Because we’ll handpick the grapes and with all of our great processing machinery, we’re not worried about any potential problems,” Miller affirmed. “After the freeze, what we’re worried about is the leaf stem. Our crews will ensure they don’t get those into their buckets, and we’ll be in good shape.”

The winery decided to make the move to French oak barrels for aging premium wines in 2017 because their style for seeking to capture depth and richness was enhanced by the tight grain wood profile, the owner disclosed.

They purchased 2,000 barrels and the following year, Miller and Maple incorporated concrete into their processing operations.

“We have amazing fruit here in the Yakima Valley. Our warm days and cool nights gives us this acidity that other growing regions don’t quite have. Our ripeness is really this primary fruit quality and I think it goes really well with concrete fermentation,” Miller acknowledged.

“The concrete is going to lift your fruit and it’s going to give you a little bit of desertification, but it just adds so much weight and texture. And for me, I want that fruit to be coupled with amazing texture and just this mouth presence of the wine, and we’re just really excited at what these contribute,” he revealed.

The one detriment winemakers are concerned about for this year’s harvest was the heavy smoke from west coast wildfires from Sept. 10-18 which caused grapes to not fully develop with sugar content. “We’re seeing some lower sugar ferments than in past years but what we do see, even though they’re not ripening in sugar, they’re still ripening in flavor,” Miller divulged.

He advised the below average sugar content, which results in lower alcohol levels doesn’t take away from the peak flavor of the grapes. “It’s all about making wine in balance. I think we have enough that it will be in balance and we’ll have the right amount of body and mouth feel we want.”

The winemakers will know a lot more about the quality of this vintage by Thanksgiving time and all the wines will be through ferment and extended maceration along with extra time on the skins done and pressed off.

The secondary malolactic fermentation will have also been completed. Miller said that’s where the lusciousness of the wine, mouth feel, with roundness and softening takes place.

Usually after Christmas, they will start their racking process of moving the wine from on tank to another or barrel to tank. Once the malolactic aromas have gone away, that’s when Miller and Maple will have their first peek at the finished of the scents and flavors of the wines.

“When you have enough wine like we will have and you have the quality – that helps us to tell our story with a farther reach, where now these wines are making their way to new markets and into new hands,” Miller enthusiastically mused.

“Someone is going to experience Washington for the first time with our 2020 vintage wines and I believe they’re going to have a great impression and flavorful taste in their mouth for what the Yakima Valley is.”