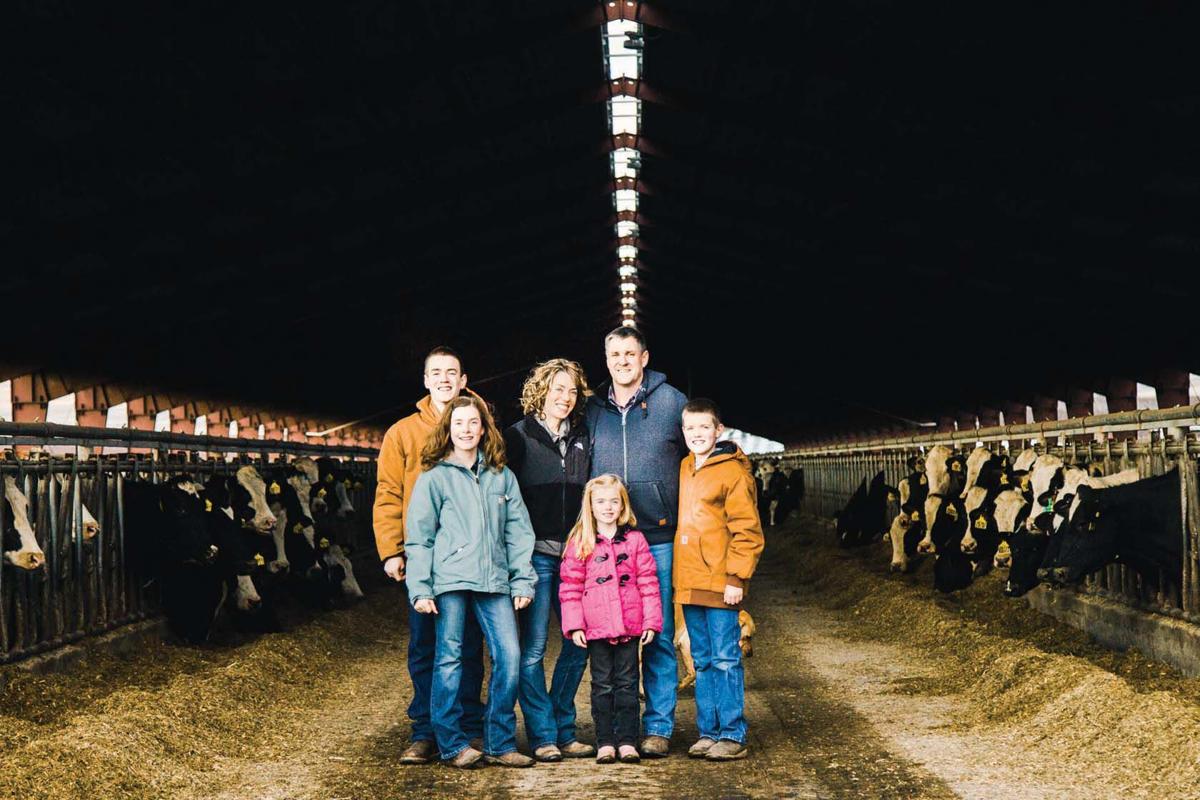 J&K DAIRY FAMILY — Pictured, left to right, in the back row, Jared, Karen, Jason Sheehan with Claire, Annalise, and Andrew Sheehan in the front stand among their livestock on the family dairy. 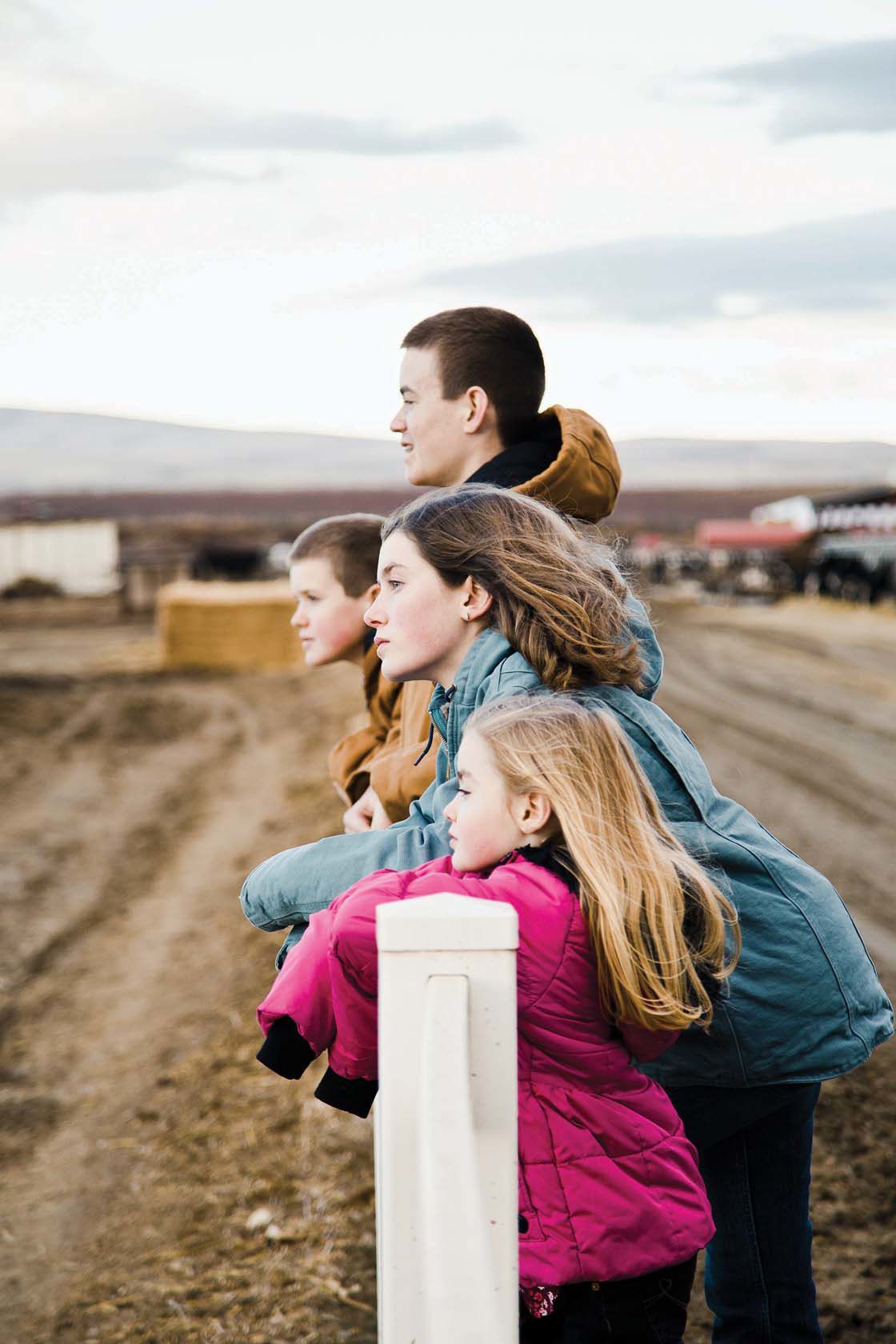 DAIRY FUTURE — Annalise, Claire, Jared, and Andrew Sheehan gaze out on the family dairy horizon on a brisk day. 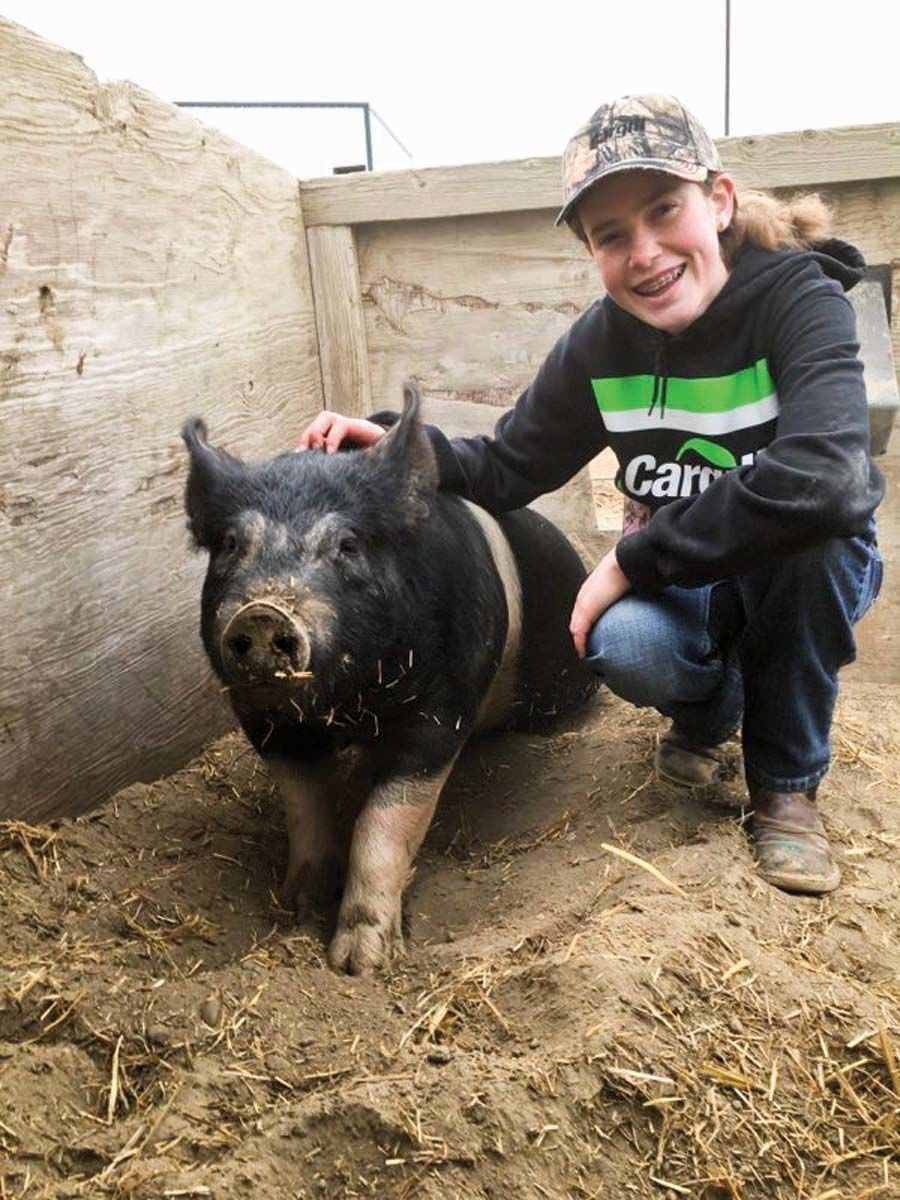 YOUNG 4H-ER — Claire Sheehan, 13, is in her fifth year showing her swine, Oinkers, for the Green Valley 4-H Club. Oinkers has been sold to a private buyer, but the Sheehan clan have gotten four more pigs to hopefully show at the Yakima Valley Fair and Rodeo in early August.

J&K DAIRY FAMILY — Pictured, left to right, in the back row, Jared, Karen, Jason Sheehan with Claire, Annalise, and Andrew Sheehan in the front stand among their livestock on the family dairy.

DAIRY FUTURE — Annalise, Claire, Jared, and Andrew Sheehan gaze out on the family dairy horizon on a brisk day.

YOUNG 4H-ER — Claire Sheehan, 13, is in her fifth year showing her swine, Oinkers, for the Green Valley 4-H Club. Oinkers has been sold to a private buyer, but the Sheehan clan have gotten four more pigs to hopefully show at the Yakima Valley Fair and Rodeo in early August.

SUNNYSIDE — Jason and Karen Sheehan have enjoyed spending time with their children on their family-run dairy, looking on the bright side of things during the Stay Home, Stay Healthy era.

Jason Sheehan says his days haven’t changed too much since the school shutdown.

“Ever since this lockdown happened, we are loving this, personally. We don’t like the circumstances of it, but it’s slowed everything down for the family,” the father of four commented with a smile in his voice.

The dairyman begins to paint a picture of their new daily normal, with the kids waking up with him and doing some work on the dairy, before eating breakfast together as a family, and later doing schoolwork overseen by their mother, before helping them out some more.

“Karen and I think this is back to the way we grew up and we’re loving the simple life,” Jason expressed. He also enjoys getting to know his children more. For instance, he is learning the activities they revel in the most and what they’d like to do.

Claire, 13, Andrew, 11, and Annalise, 7 all go to St. Joseph Marquette Catholic School in Yakima and Jared, the eldest Sheehan child at 15, goes to Sunnyside High School.

The Sheehan children have been heavily involved in 4H and FFA for several years combined, particularly in raising swine and dairy.

Recently, the oldest three have raised pigs to show at Toppenish’s Central Washington Junior Livestock Show, which was unfortunately cancelled.

Their mother explained that the show is important for young farmers to support their projects and potentially sell their livestock.

The young Sheehans decided to send letters out displaying their pigs and explaining their projects to agricultural partners who have supported them in the past.

“When you take animals to the Toppenish show or the Yakima Valley Fair and Rodeo in Grandview, there are people there who have the ability to do add-ons which means they can add money to that 4-H-er or FFA member’s account so that helps them cover the cost it takes to raise the animals,” Karen conveys.

Jared was “pretty disappointed” he was unable to go to the Toppenish show this year. He, Claire, and Andrew tried something new when raising pigs this year; they raised them in the winter instead of spring and used a mixed show feed to supplement the weight of their pigs.

Claire stated her duties in raising a winter pig comprised of making sure their water didn’t freeze, providing them with warm bedding and clothes that shed in case it snowed.

Andrew preferred raising pigs in the winter because “…we get to feed the pigs all snuggled up in their hutch.”

The Sheehan’s new method of mixing brown corn from their dairy and mixing it with the show feed they previously used primarily from Western Stockman was a success.

“The pigs were gaining more weight than they usually did,” Jared explained. He then went onto plans for his new pigs, “We have four more pigs that we plan on bringing to the Grandview show this year, in the first week of August.”

While the Sheehan clan didn’t get to show their project off at the Toppenish show and didn’t gain add-ons needed to support their projects, they are not the only ones.

“There are a lot of kids in the same predicament,” the mother of the ambitious children articulated, “It’s not just our kids that had to look for homes for their pigs, a whole slew of kids [also need support.]”

The Sheehans still plan to carry on as normally as they can, enjoying as much family bonding through life on the dairy.