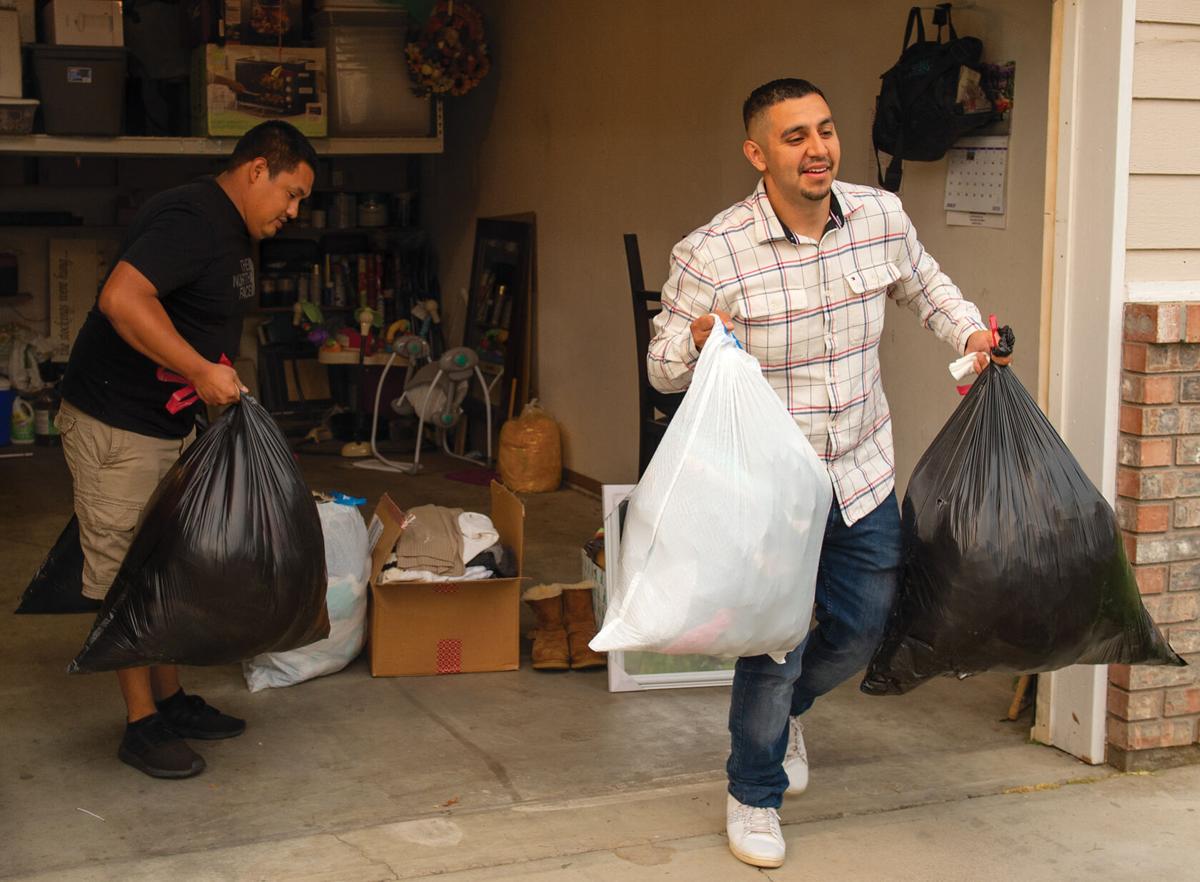 REPURPOSED CLOTHES DONATION — Right to left, Adrian Noe Calixto, N Between The Lines clothing owner, and Ebany Delgado carry out bags of family clothes for an upcoming donation to social service agencies which will benefit those in need. 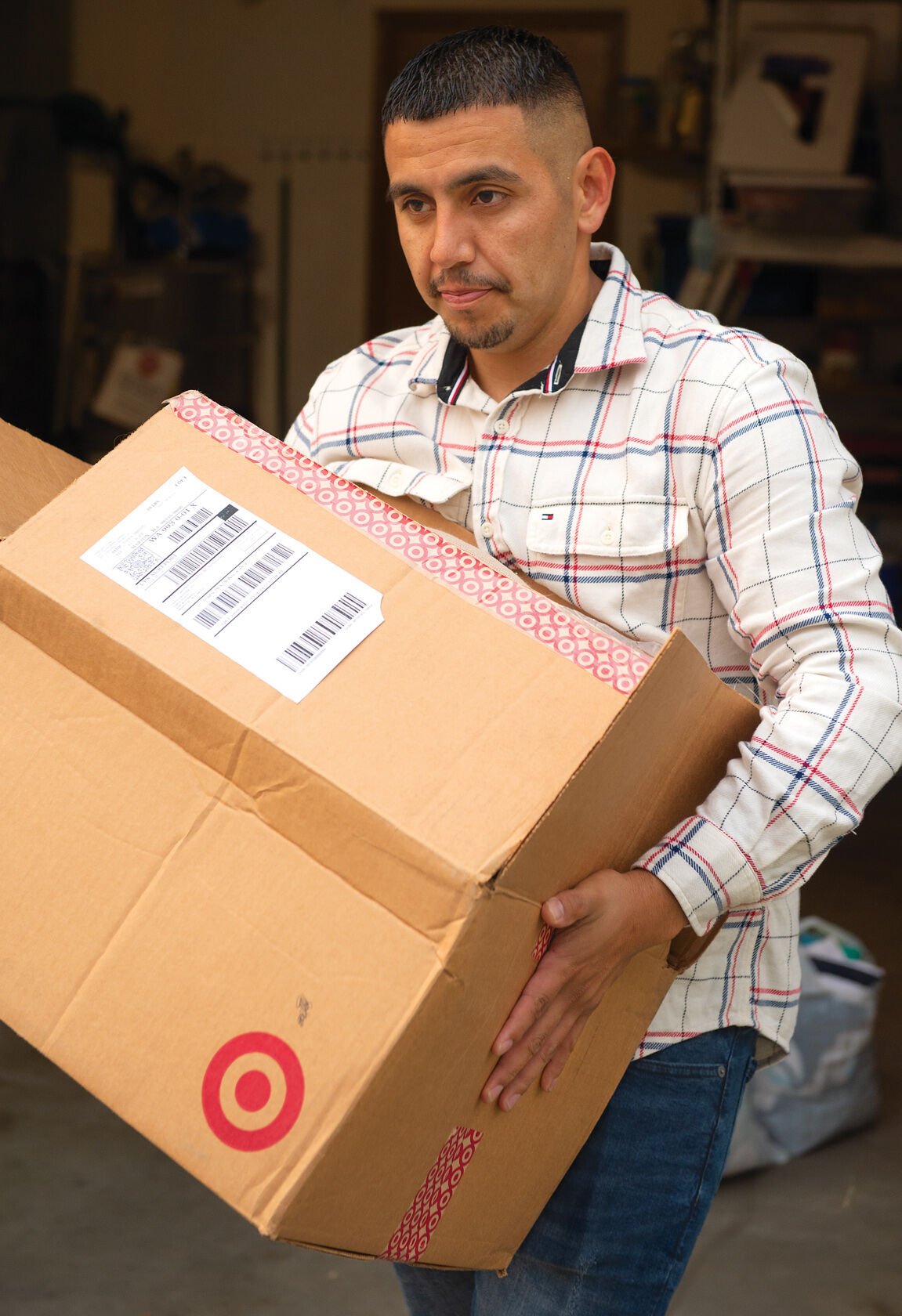 REPURPOSED CLOTHES DONATION — Right to left, Adrian Noe Calixto, N Between The Lines clothing owner, and Ebany Delgado carry out bags of family clothes for an upcoming donation to social service agencies which will benefit those in need.

MABTON — The journey of self-discovery for Adrian “Noe” Calixto, owner of N Between The Lines clothing and grid kids coach, has guided him in becoming an unwavering advocate for helping others in need with repurpose apparel.

The full-time welder turned fashion online retailer sells t-shirts, hats and now face masks while donating an article of clothing to a social service agency with each purchase. His philanthropic role took shape when he began his football coaching, matching worn athletic gear with area youth.

Over the past year, Calixto has undertaken a program of self-development and embarked upon his purposeful path to aid those struggling with life’s hardships in coordinating clothing donations destined to bring about positive change.

“What we’re doing is moving a lot of clothes between Yakima and Tri-Cities and now partnering with Rod’s House in Sunnyside for youth clothing donations that I receive,” Calixto, who also delivers women and children’s clothing to domestic violence shelters, acknowledged.

Around the time COVID‑19 was taking a strong hold throughout the lower valley in May, he decided to quit his job and expand his driven role while honing his community outreach skills.

“I recently started volunteering at Domestic Violence Services of Benton and Franklin counties for the last couple of months,” Calixto stated. “In time, I hope it grows into something major along with my sole proprietorship ambitions.”

The stand alone “N” in his two-year old business refers to the first letter in his middle name, Noe, which everyone knows him by when he was growing up. “The whole N Between The Lines actually represents the day you start until the day you end. Basically, your entire life,” Calixto conveyed. “This is just me in between those marks and I’m doing what I can do, along with anyone else.”

Grandview resident Ebany Delgado and his family of four had filled bags of worn wear and a few household items for Calixto to pick up from their garage around 6 p.m., Wednesday, Sept. 16.

Delgado voiced an encouraging message that his family achieved from contributing their worn clothing items that will aid others.

“We’re grateful and why not give back to the community. And I hope the community responds the same way and helps each other out to those who are less fortunate than we are,” Delgado declared.

For the time being, Calixto is enjoying building awareness for his company’s brand by taking pictures of the people he receives the bags of donations from and posting the images on his social media account. The public outreach is to thank them for paying it forward and a free cloth face mask is awarded for their efforts in making a difference for all to see.

“It’s a small operation and done with 100% generosity and good intentions. There’s no religious implications behind it. Just human kindness is what it boils down to,” he described.

As a result of his coaching experience in basketball, boxing and football, Calixto has dealt with at-risk youth and would like to be a mentor and provide them with self-empowerment skills to expand their perception of who they can be and the courage to change their direction.

“There’s a lot of uncertainty for people right now but there is also lot of opportunity and people need to understand that,” Calixto communicated. My life’s purpose is just to help people, however I can.”

"We’ve actually been able to donate clothes every week for the past couple of months. We basically pick a day, and on some weeks it’s been two days to go and distribute all the stuff that we’ve been gathering."