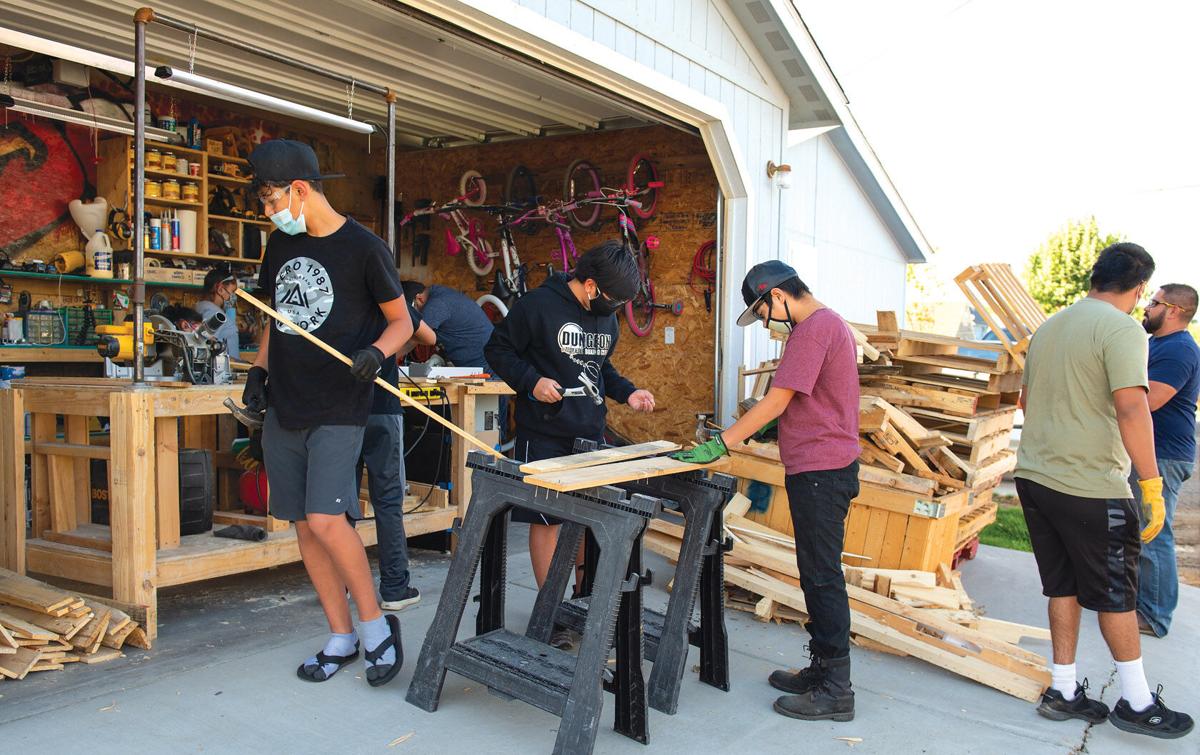 BACK TO THE GARAGE — The Dungeon Boxing Club of Sunnyside with members, left to right in the foreground, Sebastian Osorio, Jorge Campos, Nico Campos, Jaime Saucedo. launches a new wood working program called, ‘Pallets for a Purpose” at the home of Cruz and Teresa Ramos on Thursday, September 24. The club originated about seven years ago from the couple’s two-car detached garage. 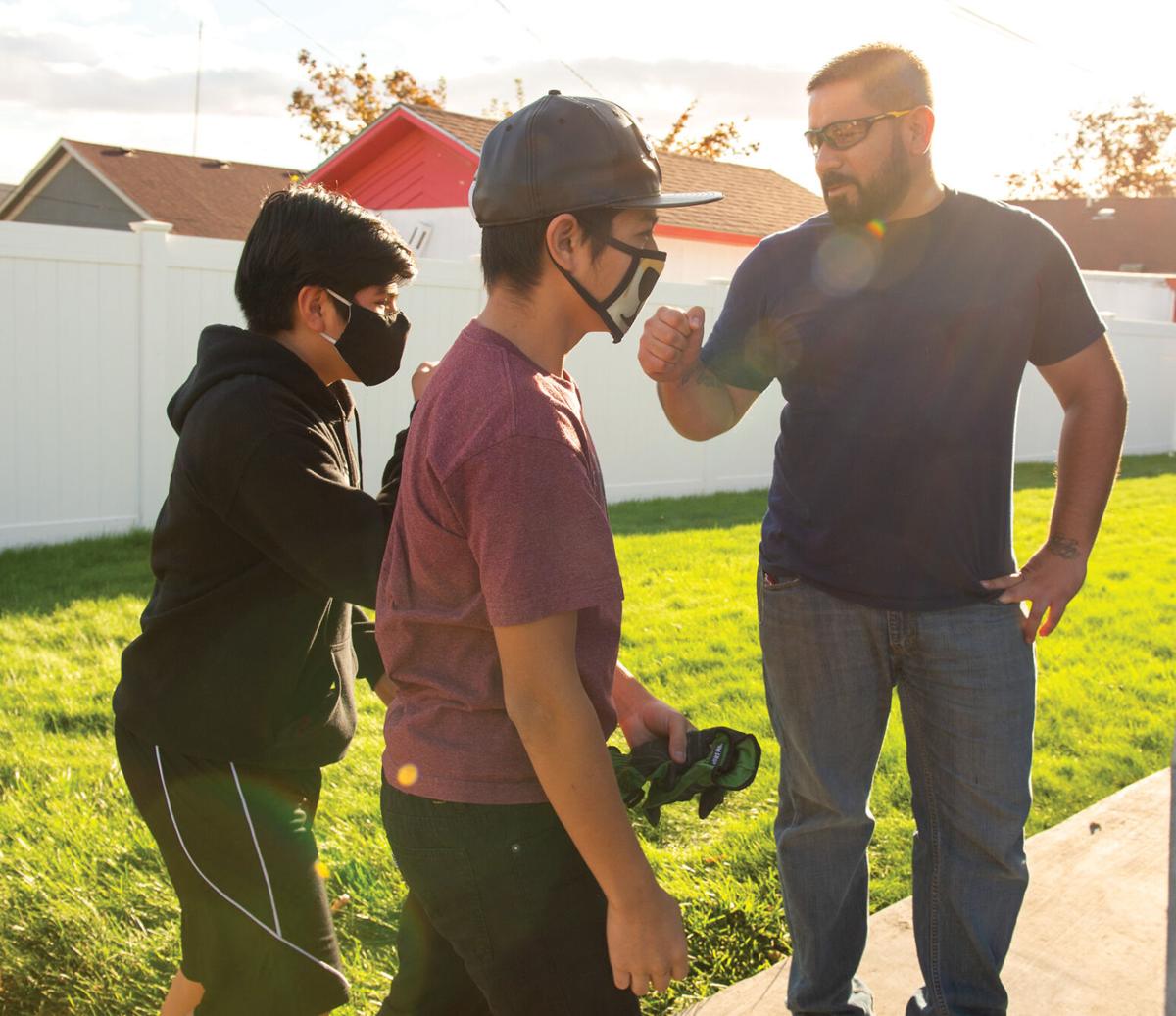 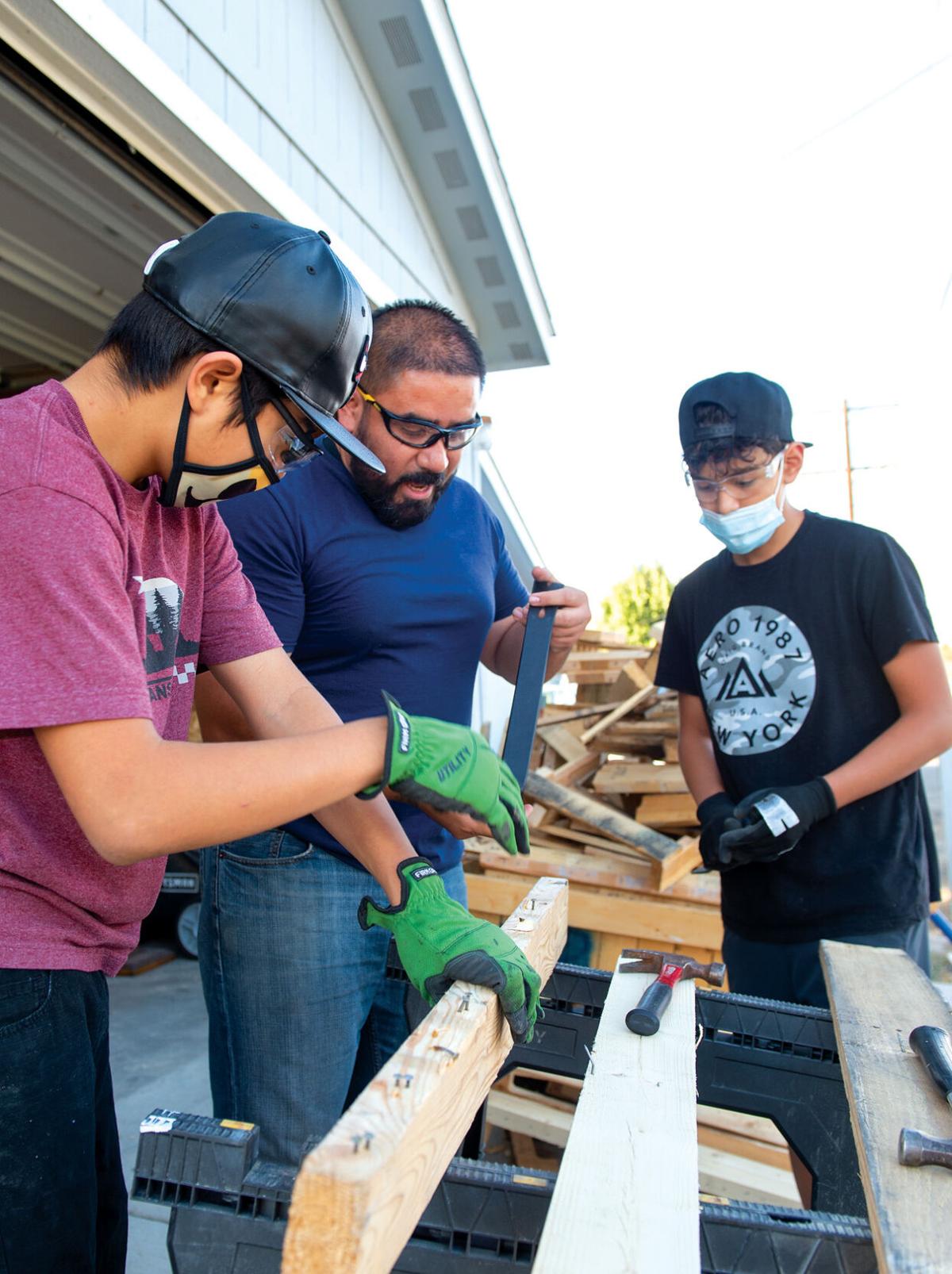 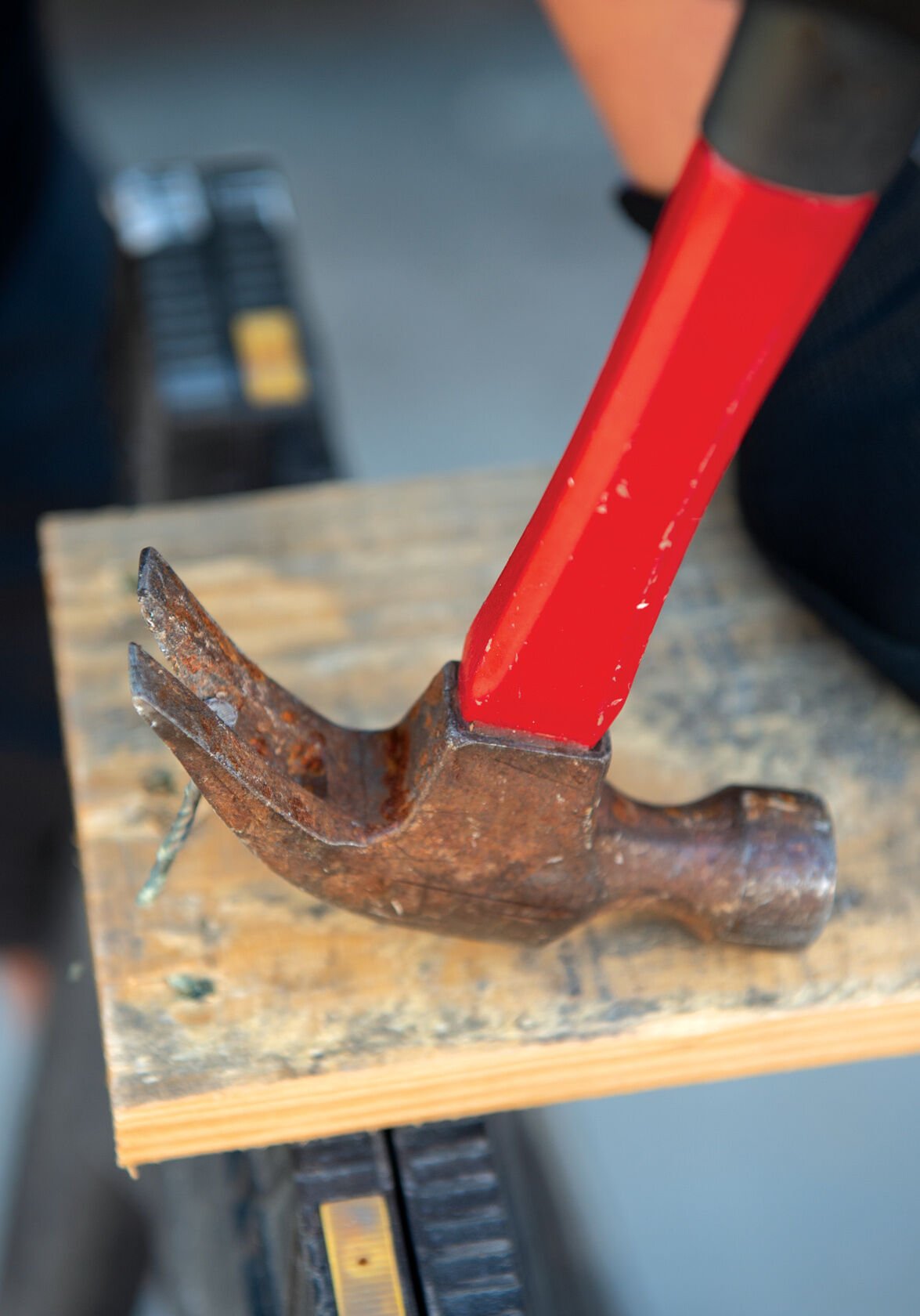 NAIL REMOVAL PREP — Hammers were put to constructive use during the Dungeon Woodworking class. 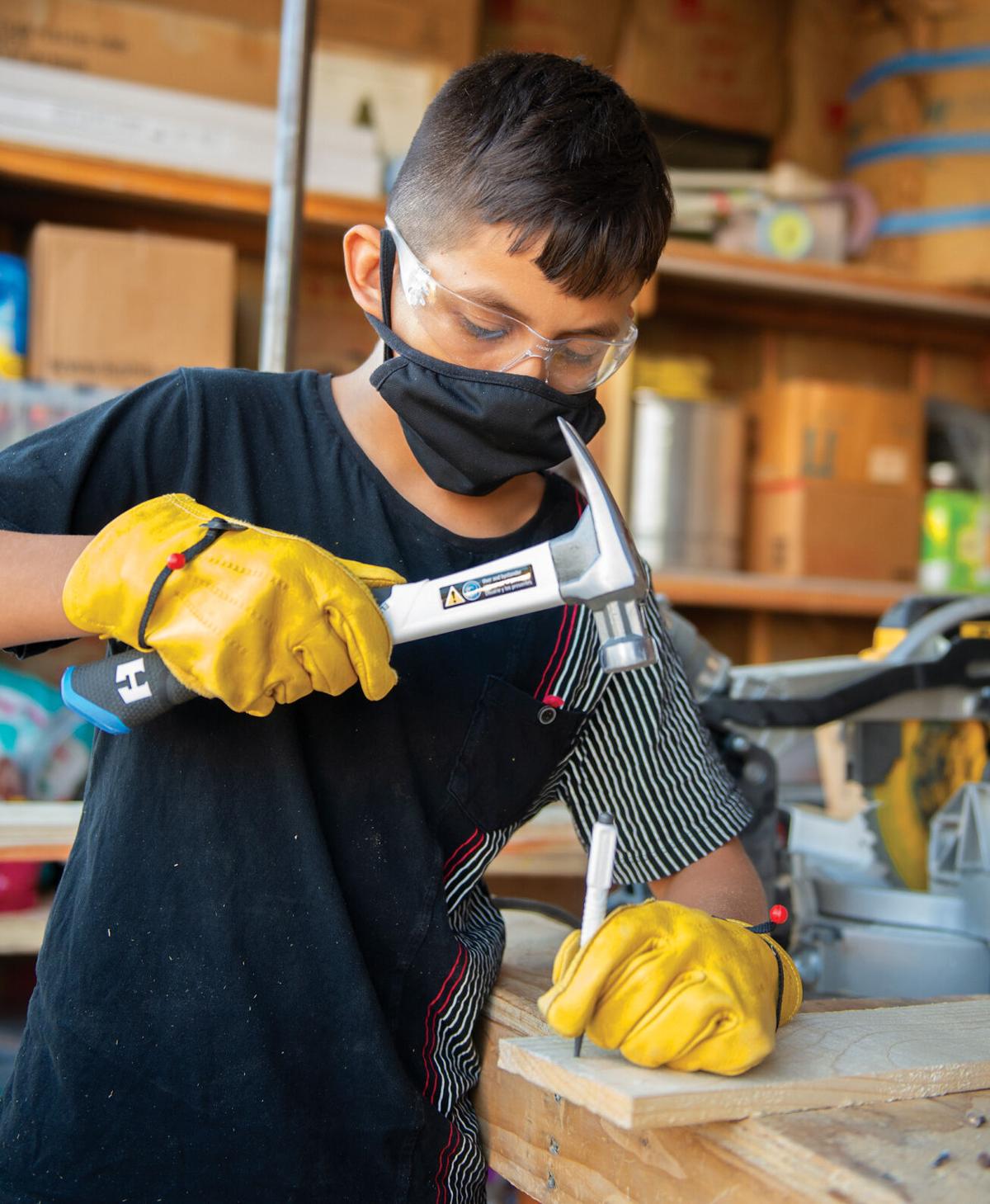 PRECISION HAMMER STRIKE — Jose Verdin punches out a nail head prior to removing it from the repurpose pallet strip.

BACK TO THE GARAGE — The Dungeon Boxing Club of Sunnyside with members, left to right in the foreground, Sebastian Osorio, Jorge Campos, Nico Campos, Jaime Saucedo. launches a new wood working program called, ‘Pallets for a Purpose” at the home of Cruz and Teresa Ramos on Thursday, September 24. The club originated about seven years ago from the couple’s two-car detached garage.

NAIL REMOVAL PREP — Hammers were put to constructive use during the Dungeon Woodworking class.

PRECISION HAMMER STRIKE — Jose Verdin punches out a nail head prior to removing it from the repurpose pallet strip.

SUNNYSIDE — The Dungeon Boxing Club originated from Teresa and Cruz Ramos’ friendly two-car garage seven years ago and since then has relocated to a larger downtown facility, encompassing more than 70 members, six years of age and older.

Founder and head coach Cruz Ramos had to temporary close the gym due to COVID-19 in March. He returned home with his wife and back to the same garage where it all began – this time to hammer out and launch the club’s new wood working program called, ‘Pallets for a Purpose.”

He had replaced his humble residential punching bag regimen with wood working equipment some time ago and began to build items for the house from discarded wood scraps which resulted in a deep feeling of hands-on accomplishment – while staying out of his wife’s way and from driving her crazy he said.

“We were kind of wondering what’s the next step for Dungeon. Our dream has always been to have a youth center here in Sunnyside where we can not only offer boxing but other programs,” Ramos expressed. “This is our next step, offering woodworking. The parable of the pallet is that you’re taking something that someone considered worthless and trash, using it to make something beautiful out of it.”

The classes take place on Tuesday and Thursday evening, 5 to 6:30 p.m. and began on Sept. 23 at 1009 Jackson Ave. On the first Thursday session, eight youth were busy with hammers in hand, working together and pulling out nails from pallet planks.

They were prepping an assortment of wood strips to plane before deciding as a group on the project they would design and build.

Harrison Middle School seventh grade student Sebastian Osorio said his parents told him about the class and asked if he would like to take part and was excited to sign up. “It’s something I haven’t done yet. I like to try new things all the time,” Osorio conveyed.

During their hour of prep, Ramos was able to get all of them flexing their muscles and physical coordination with an assortment of hand tools. The 12-year-old added, “It’s awesome.”

He instructed each of them on how to properly use wood shop accessories to safely remove the nails and staples embedded into the planks, while not leaving any on the ground to upset his alley neighbors.

12-year-old Dungeon club member Jorge Campos, who started attending the gym more than six months ago at the 528 E. Edison Ave. location, said he’s felt disappointed not to be able to work out in person while continuing to learn the sport of boxing.

Campos discovered the program during a presentation at his church. The Harrison seventh grade student acknowledged what he enjoys most about boxing, “I like the conditioning and strategy behind it.”

The young Dungeon boxer and now woodworker is looking forward to getting back into shape as the gym plans to possibly reopen soon with limited operations and earlier class times to accompany more kids in smaller groups based, according to Yakima Health District guidelines.

During the closure while trying to keep an engaging connection with the Dungeon community, Ramos was able to provide an online workout on the club’s website, but boxers had to do it on their own.

“A lot of these kids, for them being in the group and being around somebody giving them instruction face-to-face is what motivates them,” he stated.

On Monday, Sept. 21, the Ramos’ were able to resume Dungeon Boxing Club restricted operations to train their boys and girls boxers who are registered for the ring under the U.S. Boxing insurance provision. They can each coach up to five older athletes for a total of 10 at one session.

In the meantime, the eight to 12-year-old aspiring woodworkers were onboard with the idea of designing and constructing a large doghouse as the group’s initial project.

“This provides another avenue for the kids to do something with their hands,” Ramos reiterated while aiming squarely to pique their interest for crafting an achievement with pounding resolve or until it gets too cold to be outside in the garage.”