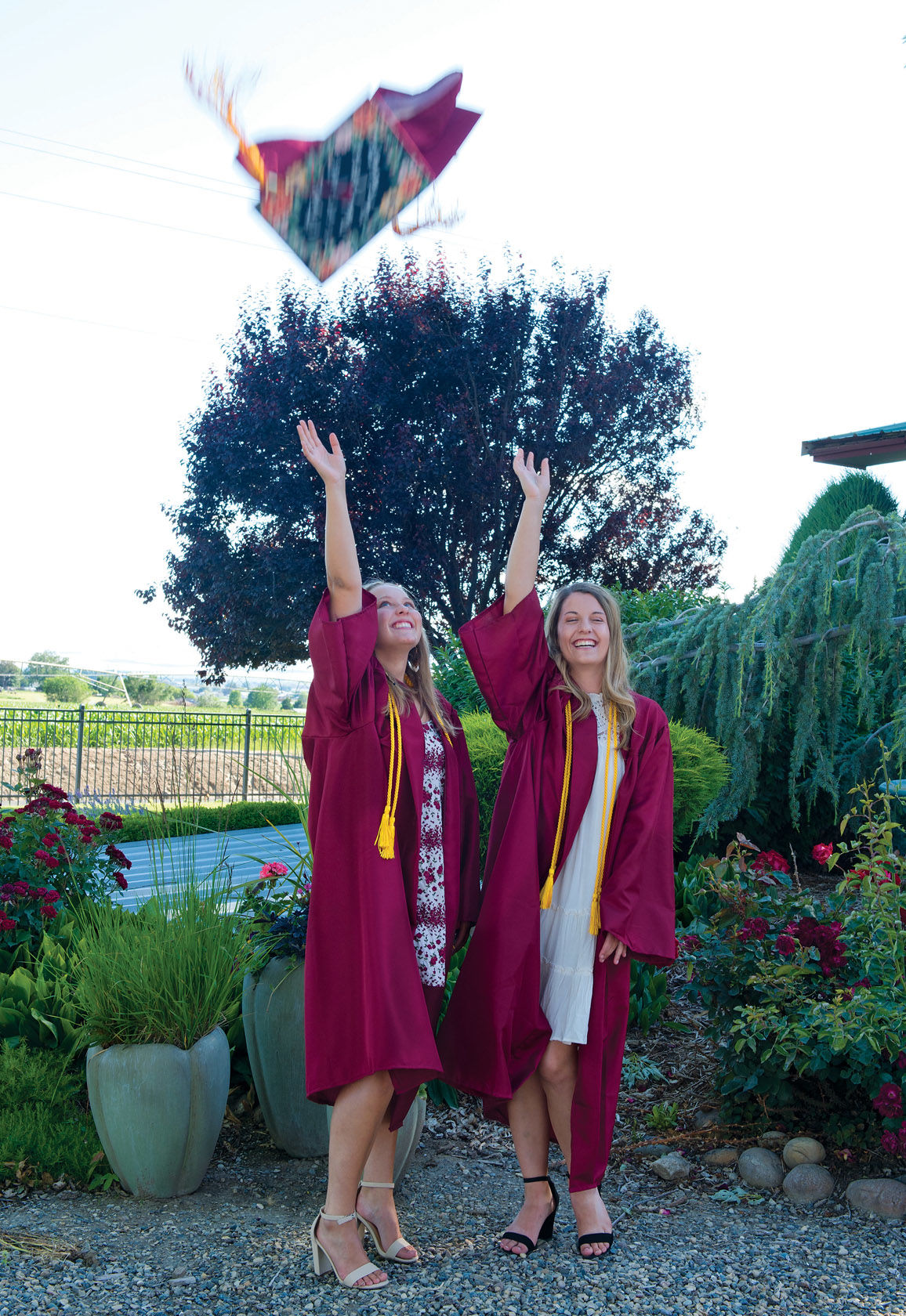 PRESERVING TRADITIONS — Jessica Sheeres and Grace Van Belle toss their caps in the air at the Van Belle family resident as is traditional for graduates to do in celebration of their achievements. 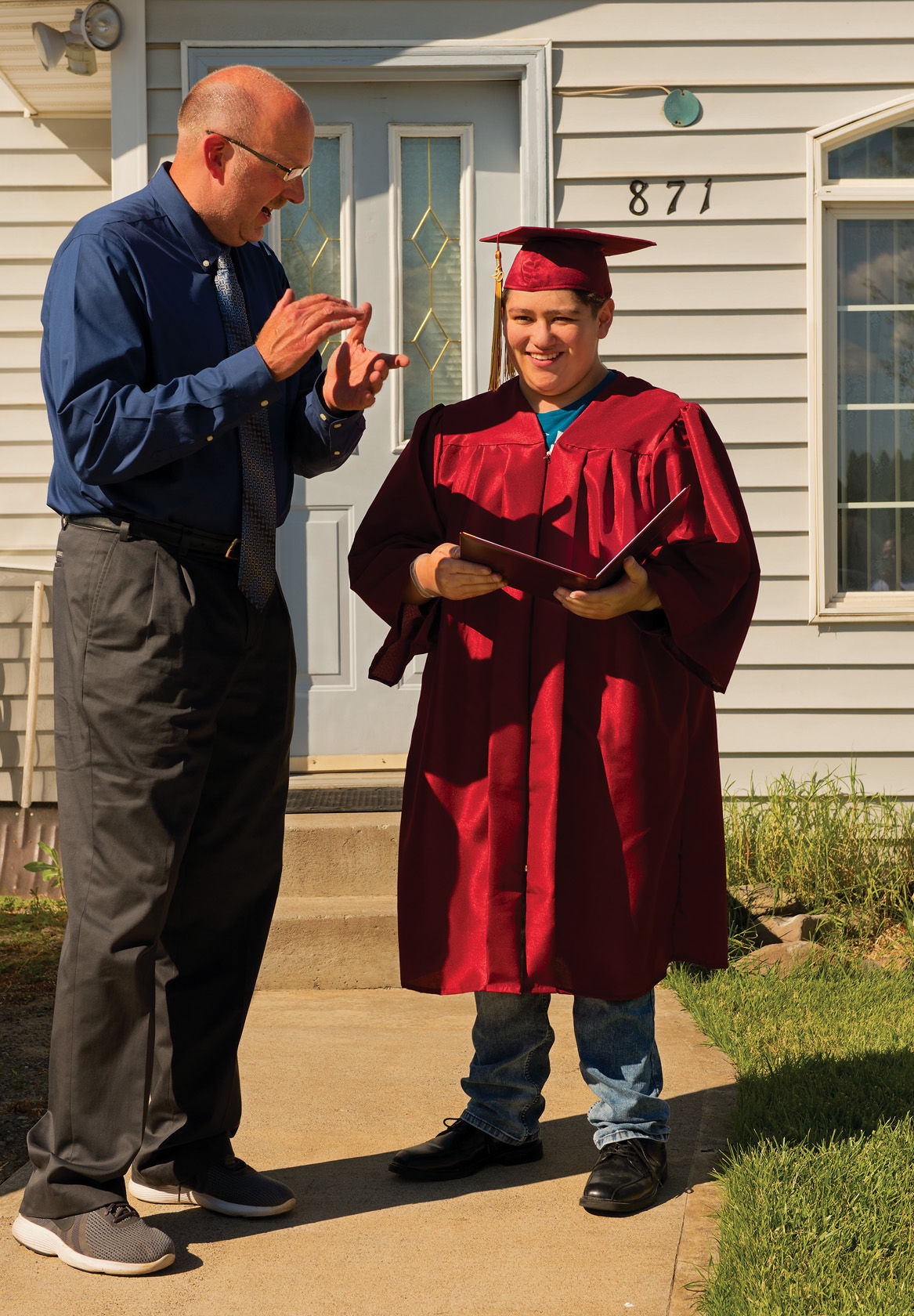 PRESERVING TRADITIONS — Jessica Sheeres and Grace Van Belle toss their caps in the air at the Van Belle family resident as is traditional for graduates to do in celebration of their achievements.

SUNNYSIDE — Carrying out high school graduation ceremonies during the COVID-19 pandemic has been an ongoing challenge as campus plans were repeatedly revised by local health officials, placing severely restrictive conditions on public gatherings, testing the resolve of students and their parents, along with administrators as Yakima County remains in Phase 1 of the state’s reopening plan.

Sunnyside Christian High School Principal Dean Wagenaar said he was holding out hope and waiting until June 19 when Gov. Jay Inslee’s school closure mandate was to be lifted, that they could have semblance of a normal graduation.

According to the Washington State Department of Health, Yakima Valley has the highest per capita rate of COVID-19 on the West Coast and the county has 22% of the state’s COVID‑19 hospitalizations and as a result, Sunnyside Christian’s commencement plans were once again revised.

As an administrator and teacher with 31 years of combined experience, the principal has been an integral part of the springtime routine and upholding campus traditions as seniors wrap up their studies and move forward onto new academic and vocational pursuits.

“You get to the spring of 2020 and talk about a change of plans, so you’re going to remember our students for that whole thing too,” Wagenaar fondly stated.

Following a one-sided meeting with Yakima Health District officials, the principal was advised to use his previous online plan with the strategy of developing a virtual graduation program which would be distributed in cooperation through the senior memorabilia company Josten’s platform.

Last week, Wagenaar along with Dawn Haak and Derek Westerhoff embarked upon personally delivering 2020 diplomas to 19 class of 2020 graduates on Tuesday, June 16, and Wednesday, June 17, while capturing the digital moments for use on the Friday, June 26, multimedia program at 7 p.m.

When senior A.J. Garcia accepted his diploma and both parents gathered around their son, his mother became very emotional as they posed for pictures. “It was a wonderful moment and very special,” Wagenaar conveyed.

The intimate scene played out before the camera with heartfelt joy and appreciation which was embraced and shared by all the seniors, their family members and the three-person production team.

“I just thought it was a neat thing to do by opening the diploma with them so I could read their name and make sure it was spelled correctly and give them the opportunity to look at it. Otherwise, it would stay closed and they don’t take that moment to even look at it,” Wagenaar acknowledged.

Acting in the role of executive producer, he later added a voice-over to the program about each student’s memories, summer and fall plans, favorite scripture passage, quote or personal advice to accompany the video of them receiving their diploma.

“My old school didn’t have football, so now I had football and that was pretty fun. I liked all the Friday night lights, fun stuff,” Jessica Sheeres reminisced while planning to attend Seattle Pacific University and studying early childhood education in the fall.

“It’s awesome. Finally, a little postponed but we made it,” Grace Van Belle, who has been going to Christian School since kindergarten, excitedly exclaimed. She plans to study elementary education at Central Washington University.

Both Van Belle and Sheeres shared in the traditional cap toss together as video rolled of the celebratory event.

“It was just really neat to see all the families together having a good time and they enjoyed it all, and it was a lot of fun,” Wagenaar stated. “We have a nice group of kids and a lot of them participated in so many activities. I wish them God’s blessings as we all move on and I hope they keep in touch.”