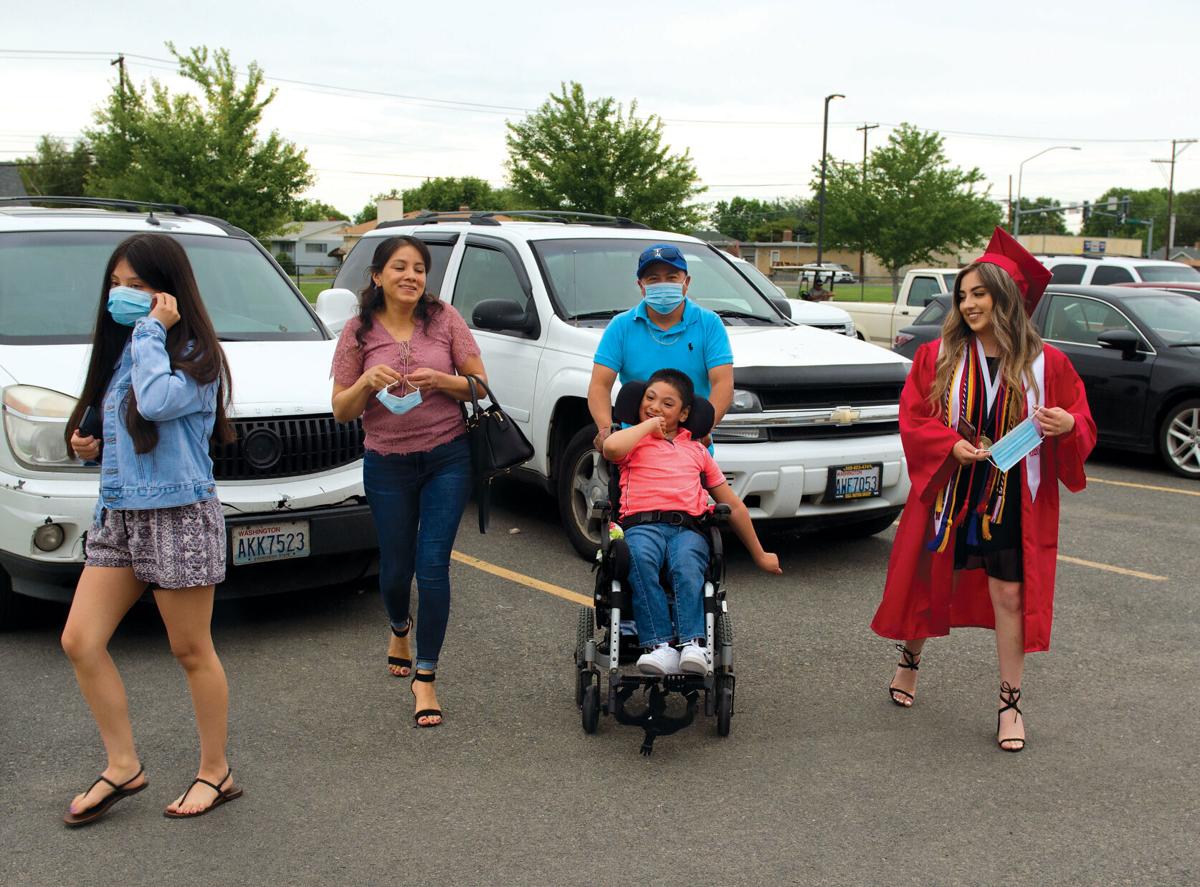 Valedictorian Bianca Salgado walks excitedly with her family toward the campus auditorium as she takes part in Sunnyside's Class of 2020 livestreaming and commencement program on Friday, June 5. 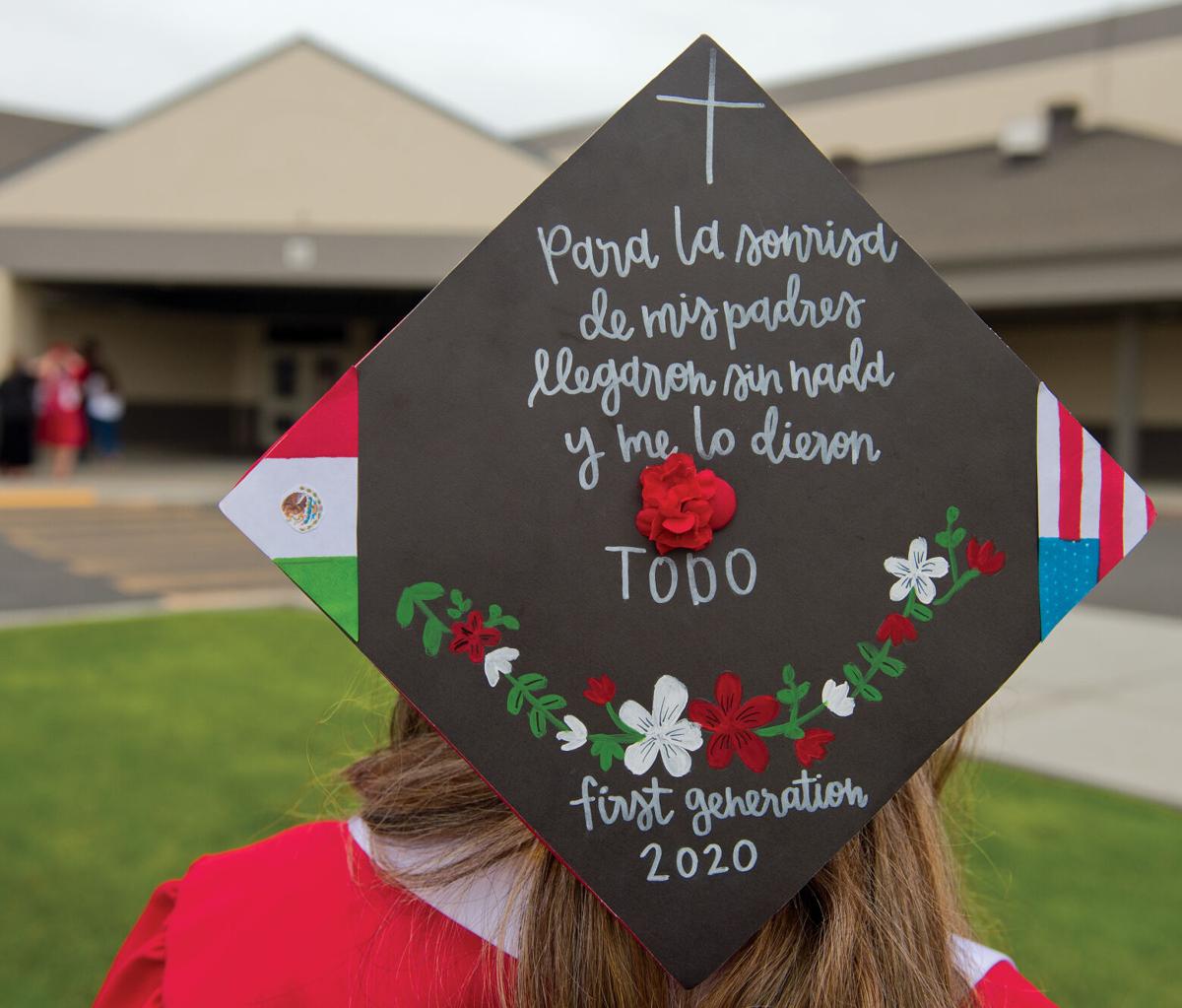 Valedictorian Bianca Salgado acknowledges the foundations her family built for her with a cap reading, “Para la sonrisa de mis padres llegaron sin nada y me dieron todo,” which translates into “For the smile of my parents; they came with nothing and gave me everything.” 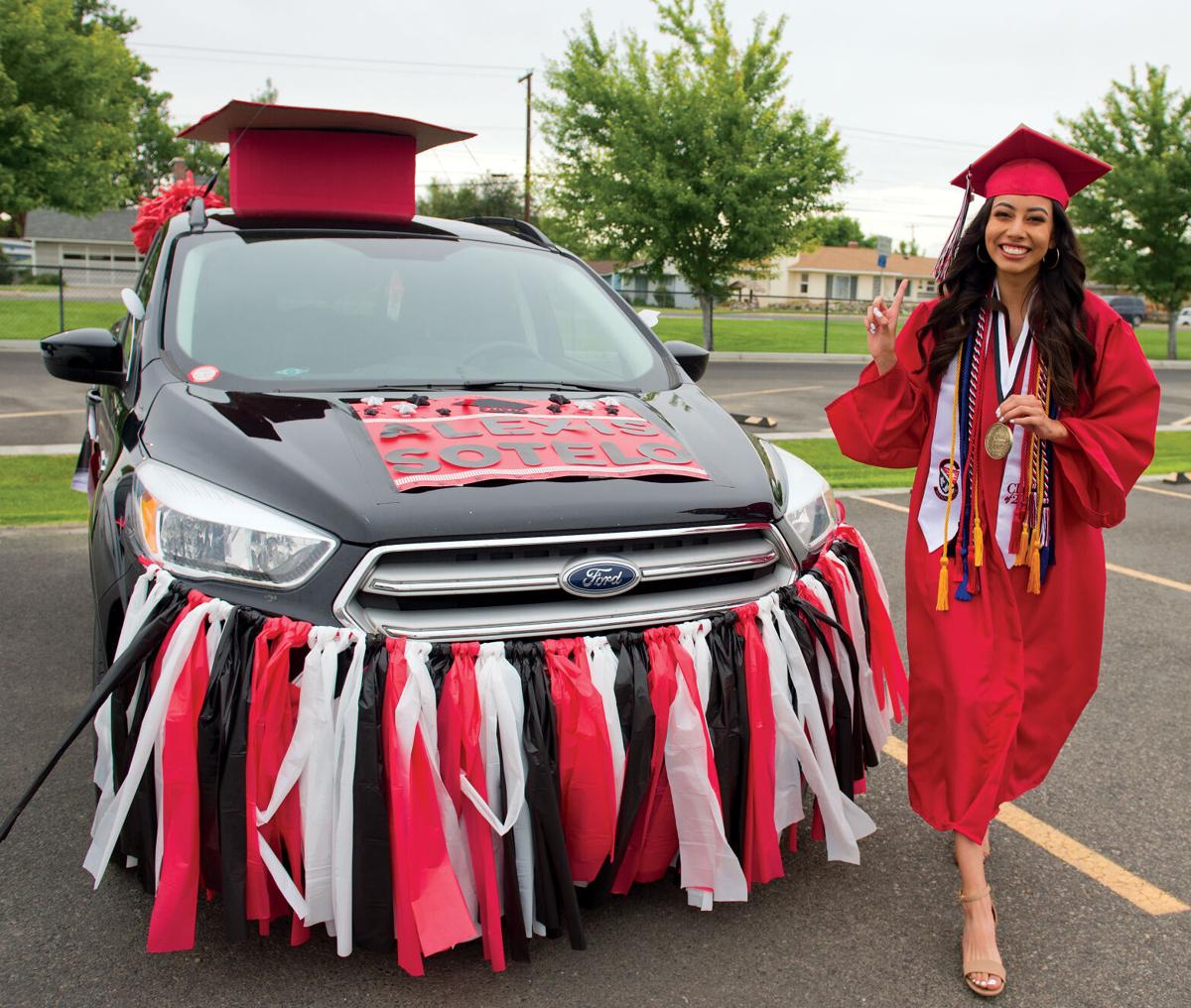 GRIZZLY SPIRITED TRADITION — Valedictorian Alexis Sotelo arrives in her decked-out car that her family decorated for her. Sotelo beams with Grizzly pride as she makes her way into the high school. In her speech, she praised her teachers and counselors, “As long as you surround yourself with people who want to see you succeed, great things will happen.” 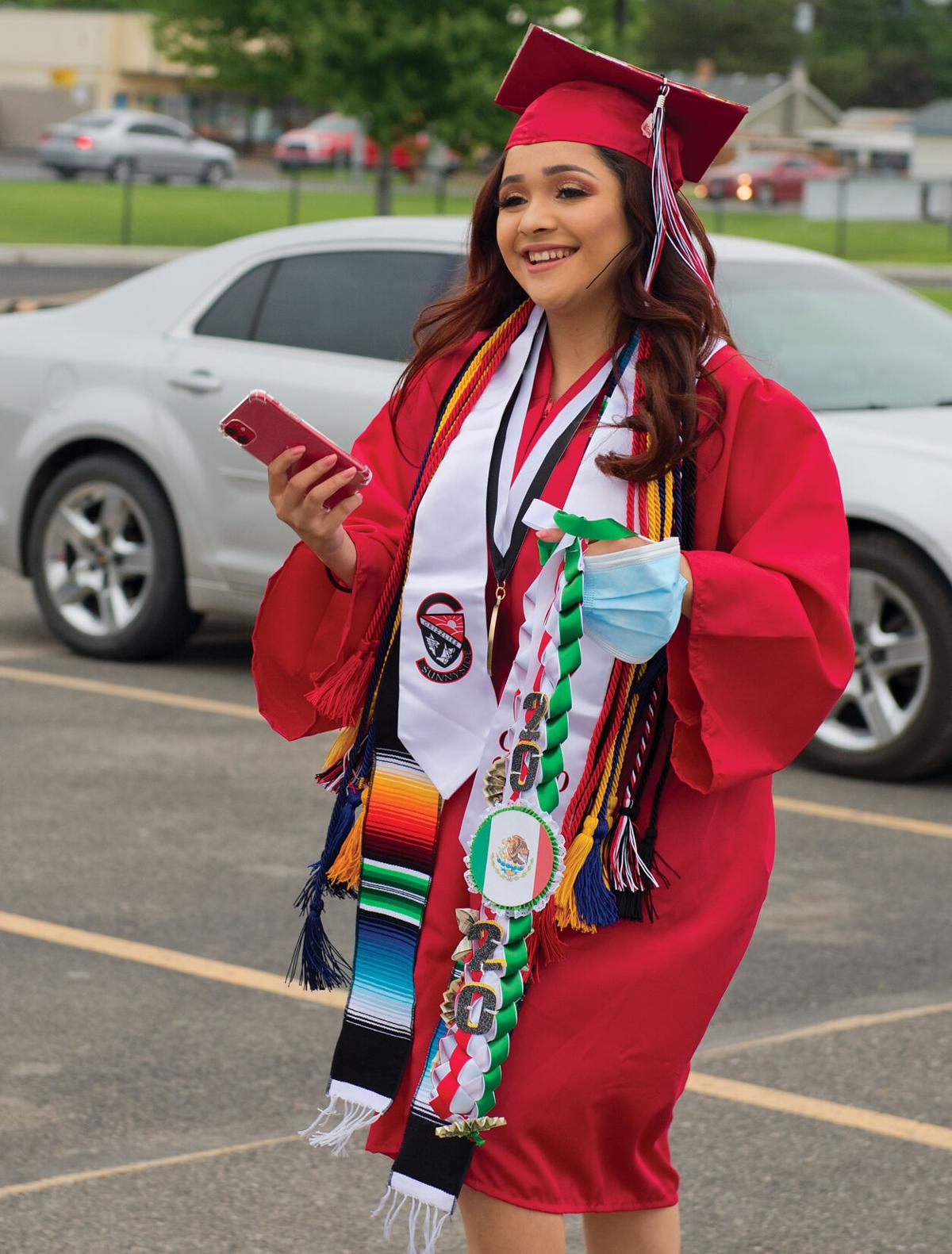 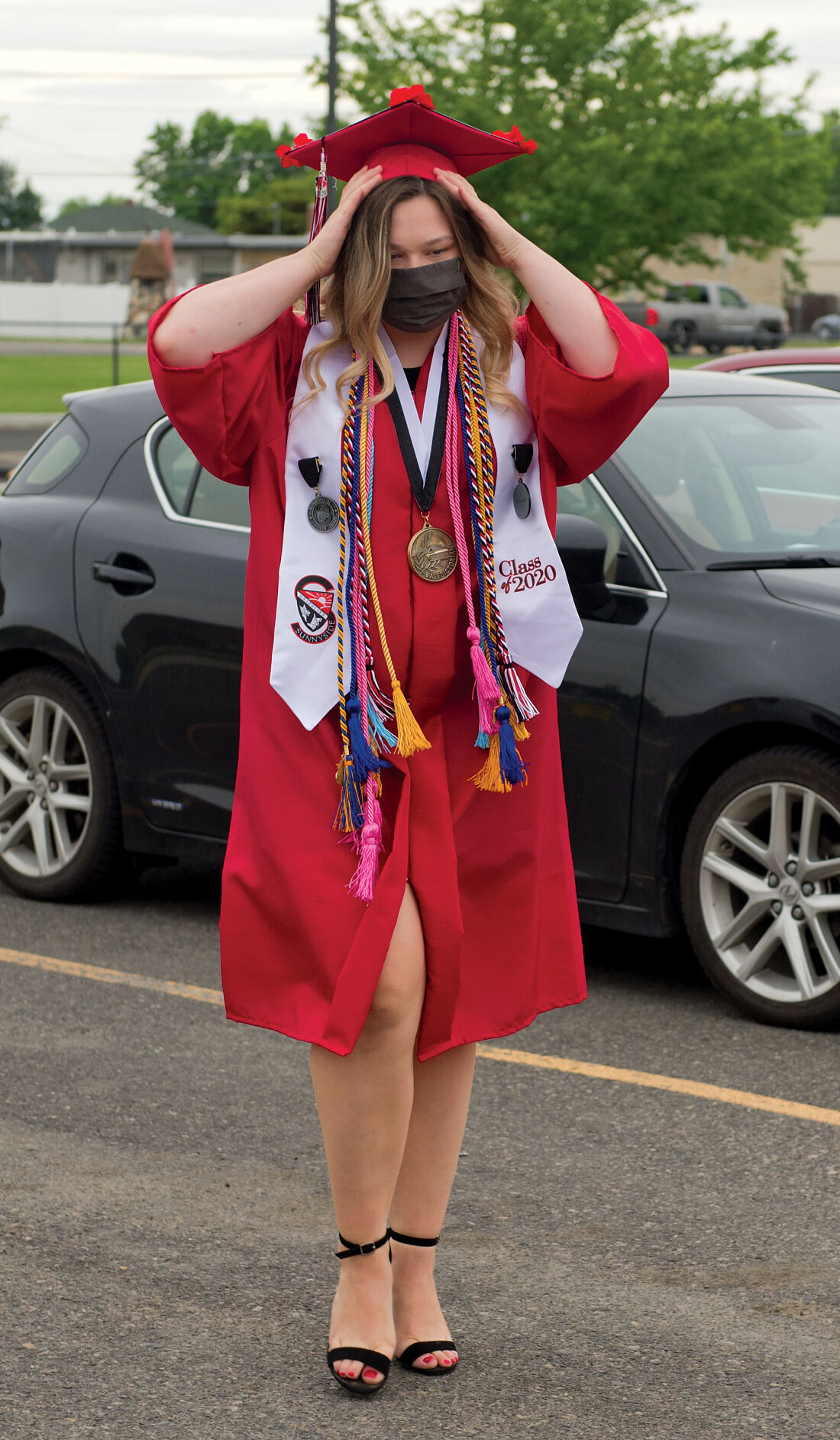 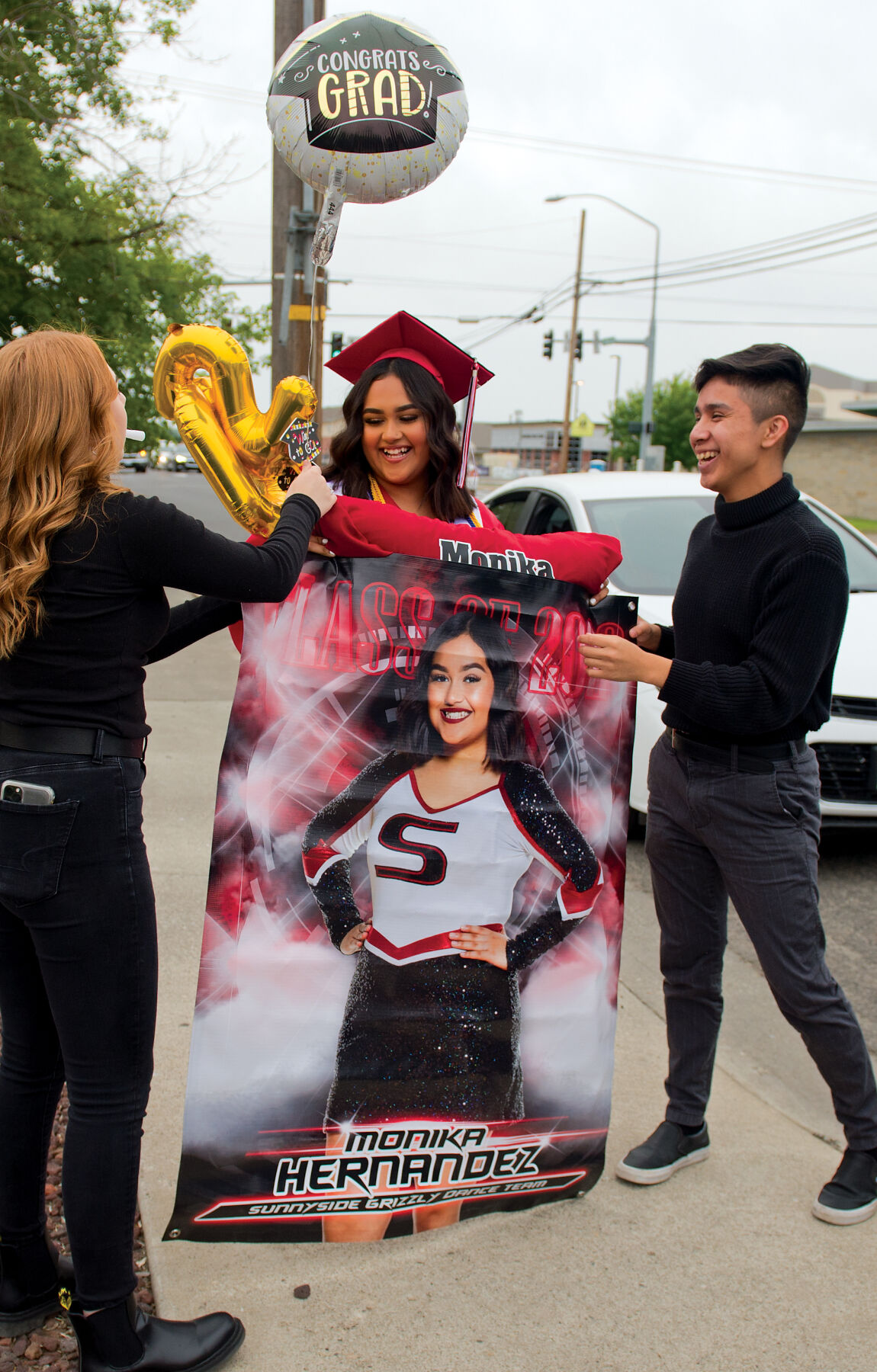 Grizzly Dance Team member Monika Hernandez is presented with a plethora of gifts from her teammates for graduation.

Valedictorian Bianca Salgado walks excitedly with her family toward the campus auditorium as she takes part in Sunnyside's Class of 2020 livestreaming and commencement program on Friday, June 5.

Valedictorian Bianca Salgado acknowledges the foundations her family built for her with a cap reading, “Para la sonrisa de mis padres llegaron sin nada y me dieron todo,” which translates into “For the smile of my parents; they came with nothing and gave me everything.”

GRIZZLY SPIRITED TRADITION — Valedictorian Alexis Sotelo arrives in her decked-out car that her family decorated for her. Sotelo beams with Grizzly pride as she makes her way into the high school. In her speech, she praised her teachers and counselors, “As long as you surround yourself with people who want to see you succeed, great things will happen.”

Grizzly Dance Team member Monika Hernandez is presented with a plethora of gifts from her teammates for graduation.

SUNNYSIDE — The night of graduation usually brings droves of families and community members to Clem Senn field, easily making it one of the biggest events of the year in Sunnyside but to protect and to commemorate our future leaders safely, their graduation caps will be tossed in the air of their own living rooms.

To ensure the graduates have the hurrah they deserve, Sunnyside High School opted to livestream speeches from the class Valedictorians and Salutatorian while they await the August date for when students can hopefully walk through the coveted Graduation Gate.

While they endured some technical difficulties on the website initially, the Grizzly spirit persevered and at 6:23 p.m., the program commenced and speeches were delivered on Facebook Live where over 600 viewers watched the event, commenting with their congratulations.

Principal Ryan Maxwell had hoped for graduation to look like the plan they presented on May 21 with students ultimately walking across the stage, however, he was happy to keep the Class of 2020 safe and host a livestream of speeches which also included Class Speaker Pete Marquez.

“They’ve definitely earned the right to be on stage. They’ve worked hard for 12 years and that’s the least we can do to give them that opportunity,” Maxwell emphasized.

The Sunnyside High School principal reflected on this past year his seniors have had and he admitted that it’s been a challenging year, all things considered.

“They had a teacher pass away in October and then soon after that, COVID. But what’s really special about this class is the leadership. They’re positive leaders, they’ve stayed positive during this whole time. They still found ways to connect to the school and to connect to other students,” Maxwell beamed.

Connecting with her Grizzly Dance Team members and Coach Rosie Moran as they dropped off her graduation gifts, Monika Hernandez’s last night as a senior was an understanding of the safety measures taken. “It’s really disappointing in a way, but I kind of get why it’s happening, it’s what’s best for our safety. As long as I get my diploma and I know that I gave it my all, I’m proud in the end. I’m happy to make my parents proud.”

As the eight Valedictorians entered the high school auditorium to deliver their speeches, Bianca Salgado worried about her own speech. “Like, you want to say so much but what do you say to a class that lost the rest of their senior year? You know, they were deprived of so much. It was hard, you know, but I found the right words to say, I think. Hopefully!”

Salgado’s speech encouraged the Class of 2020 to keep looking on the bright side. She described the challenges she’d had her senior year beginning with a car accident, troubles with her mother and father’s health, and taking care of her brother with a chronic illness. “Life was trying to drag me down, but I let God handle all things above me, and instead of being discouraged, I kept swimming, even though I don’t know how to swim,” referencing the Pixar movie, Finding Nemo.

This resilience spoke volumes and Vice Principal Dave Martinez made note of that resilience, “I was thinking back to myself as an 18-year-old and I don’t think I would have taken it that well,” he exclaimed.

Alexis Sotelo was one of those who did not take too well to the news of a canceled graduation. “Our class was so excited to have a graduation, but unfortunately this year had other plans,” she remarked in her speech. Sotelo then offered her insight in that this year was a lesson to the class to never take anything for granted. She even smiled and joked, “Maybe for our 10-year reunion we can set up an actual stage and have an actual graduation.”

Retiring history teacher and Class Speaker Marquez observed the maturity of the Class of 2020 by stating he was not surprised in their ability to adapt to the pandemic and social issues as he mirrored his time as a high schooler. “My classmates were a bit like you. We were going into the world of turmoil and international problems.”

He highlighted the significant historical events 2020 has seen so far with the pandemic, unemployment rates, racial turmoil and he asked the Grizzlies, “Should we be afraid? Should we worry about tomorrow? Should we stop going forward? My answer is no.”

Valedictorian Marlee Weets and Lilian Froese-Raihl also addressed the social injustices being discussed amongst their peers. Filled with raw emotion, Weets declared, “I want to say I understand that I will never understand your struggle, but I will use my privilege to stand beside you and fight the injustice you face.”

Froese-Raihl urged her peers “This is the time to be daring. To take action. To stand up and speak out for what you believe in even if you’re afraid of what others might think. Our class has the power to change the world for the better.”

The young lady finished her speech with “Stand tall, Class of 2020, and step boldly. Make this chapter a great one.”

This graduation ceremony isn’t the last celebration for the Class of 2020. Principal Maxwell confirmed that there are plans in the making to have a ceremony in the late summer depending on the next phase of reopening the Yakima County.

Vice Principal Martinez reiterated, “In August, we’re hoping to make it the biggest firework show in the history of Sunnyside.”