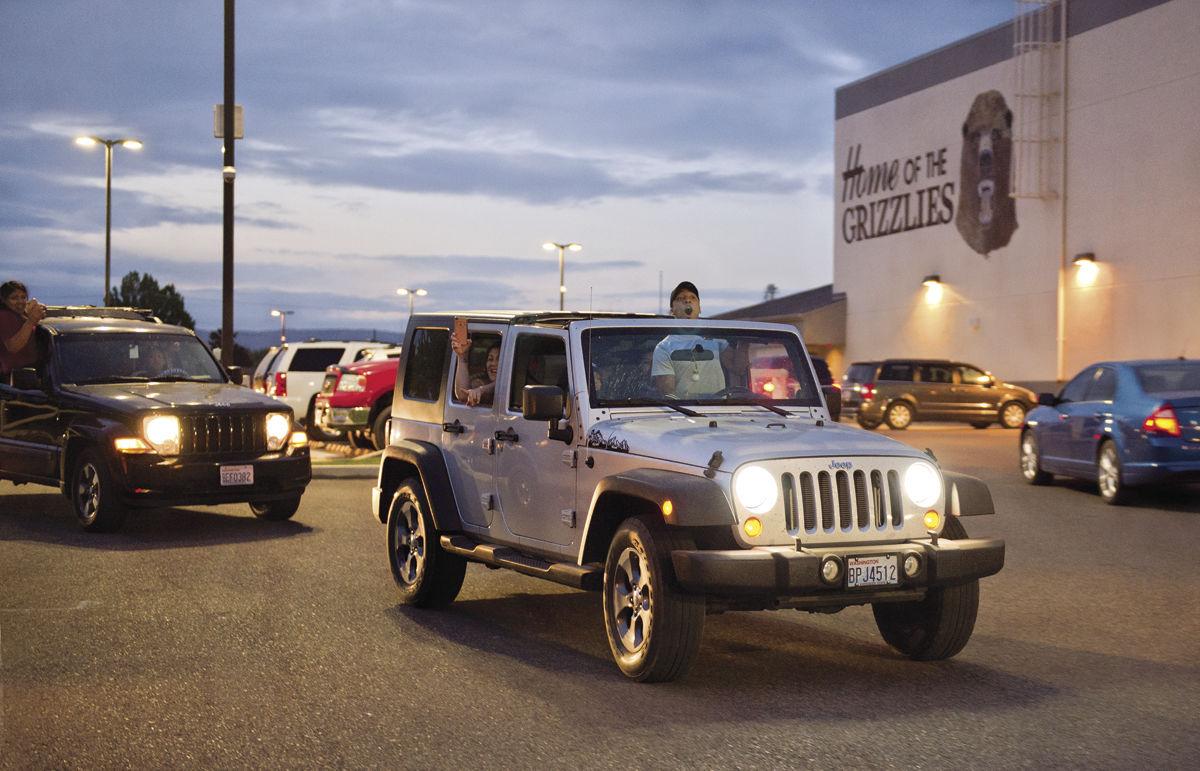 Mike Rivera along with Dallas Borrego, his mom Betty Maysonet and eighth grade Harrison Middle School student Yvette Ramirez join the parade of cars honking and cheering for the Class of 2020 on Friday night, May 1. 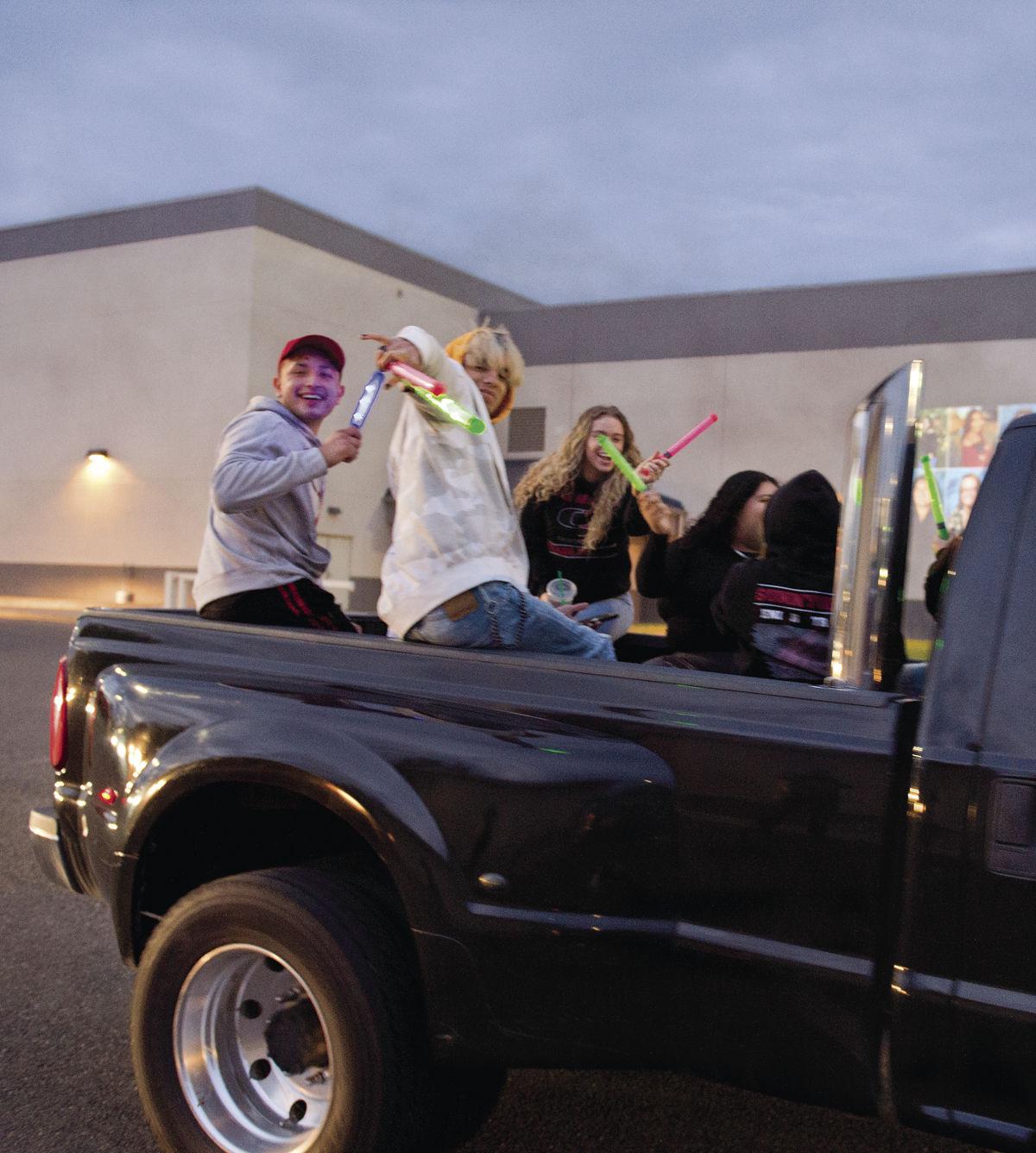 Vehicles parade through the high school parking lot, in front of the field entrance gate and toward Harrison Middle and loop back around beginning at 8:20 p.m. or 2020 military time for 20-minutes and 20-seconds. 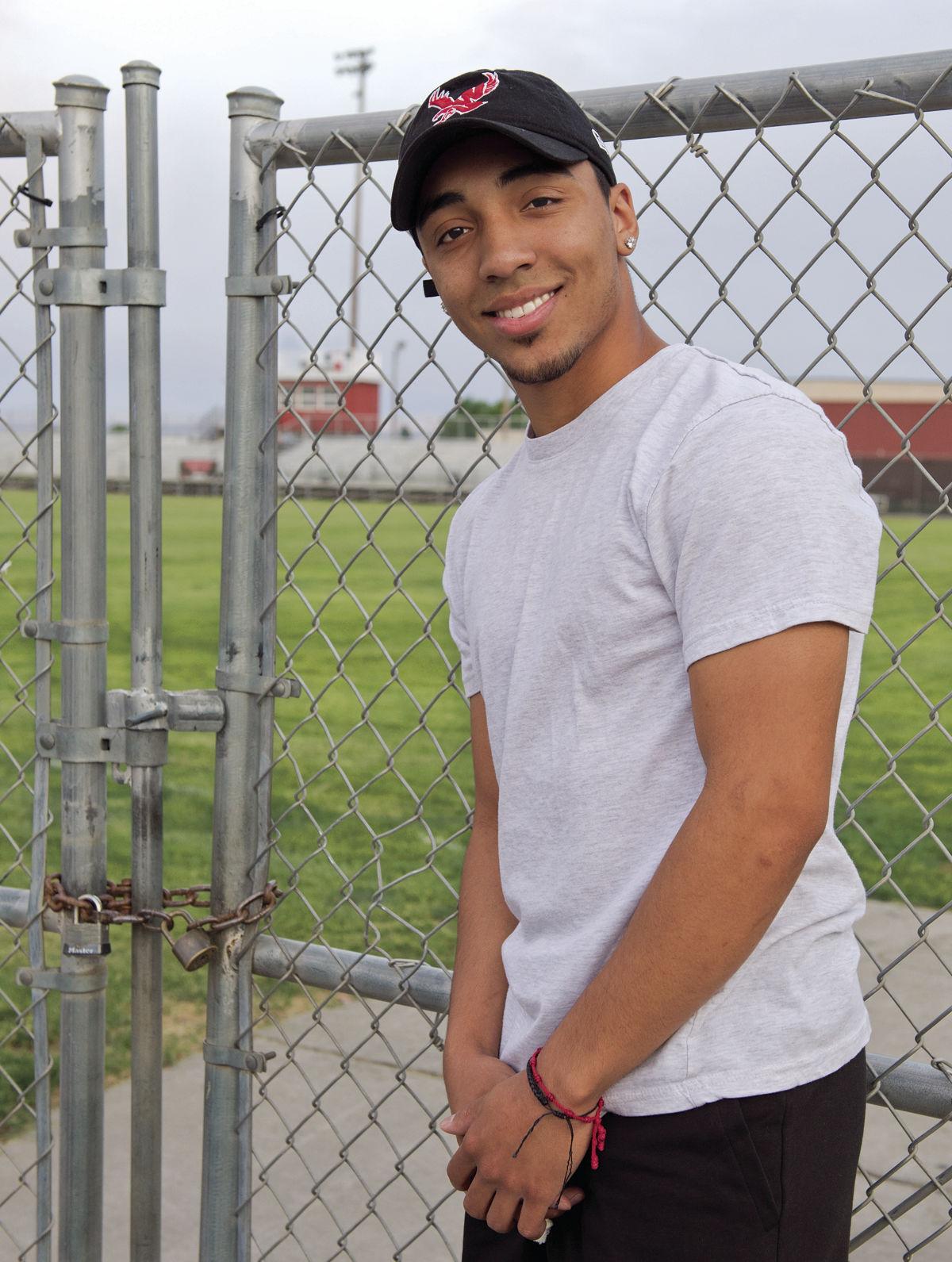 Senior Mike Rivera plans to return to Clem Senn Field once the campus and stadium can be reopened safely to students and the public. The in-coming Eastern Washington University fresh-man looks forward to Sunnyside’s new stadium and track facility, along with an athletic building in 2021. The sports complex will include lockers and training spaces, concessions, and restrooms.

Mike Rivera along with Dallas Borrego, his mom Betty Maysonet and eighth grade Harrison Middle School student Yvette Ramirez join the parade of cars honking and cheering for the Class of 2020 on Friday night, May 1.

Vehicles parade through the high school parking lot, in front of the field entrance gate and toward Harrison Middle and loop back around beginning at 8:20 p.m. or 2020 military time for 20-minutes and 20-seconds.

Senior Mike Rivera plans to return to Clem Senn Field once the campus and stadium can be reopened safely to students and the public. The in-coming Eastern Washington University fresh-man looks forward to Sunnyside’s new stadium and track facility, along with an athletic building in 2021. The sports complex will include lockers and training spaces, concessions, and restrooms.

SUNNYSIDE — Back on the fourth day of spring practice, senior Mike Rivera was participating in hurdle mobility drills with about 130 of his Grizzly track teammates in preparation for the upcoming season – eight days later, school and all extracurricular activities, including sports were suspended due to COVID-19.

During the two-hour practice on Thursday, March 5, the sprinter said he aspired to do something positive for the community – even if it was as small as winning a state title by running his personal best, striving to make his coaches, family and school proud.

“It has not hit me yet, like we have no more school. I’m still in shock,” Rivera candidly conveyed following his participation with classmates in a parade of vehicles outside Clem Senn Field. The “Be the Light” campaign honored the state’s senior class and spring sport athletes on Friday, April 17.

Earlier in the day, SHS boys’ varsity soccer Co-Head Coach David Guevara spoke to school administrators about seeking out the historic tribute in turning on the stadium lights at 8:20 p.m.; or 2020 military time for 20-minutes and 20-seconds.

“This definitely struck a chord in my heart because it’s definitely not just soccer but it’s all sports and all seniors,” the high school science teacher expressed. “The honor is definitely instilled in my heart now. I feel for all of those young men and young ladies that, unfortunately, had everything cut short.”

Vehicles with cheering students rolled into Harrison Middle School from 16th Street and proceeded through the parking lot toward SHS while demonstrating their caged up Grizzly Nation spirit along the west end zone of the football field.

“It was an awesome feeling that they’re actually doing something for us. I am happy that we could come out there and have a little time,” Rivera explained, adding how it’s tough not being allowed inside the stadium when the lights are on.

While almost everyone by now has learned the virus has a speedy stride all its own – the unprecedented action of canceling the remaining school year by Gov. Jay Inslee on April 6 resonated soundly for the class of 2020 students, outpacing ceremonial high school traditions with new social distance versions.

Following the success of the mobile outreach program, school officials have carried on connecting with students by hosting their own commemorative event, “Grizzly Nation; Friday Night Lights.” The 2020 program will continue to cruise thru the high school parking lot until graduation, which was scheduled to commence June 5.

“You don’t get into working in education not to enjoy interactions with kids. It gives you a purpose,” SHS Athletic Director Scott Paine articulated following a week of online video conference meetings and distance learning instruction.

The disappointment resulting in the cancellation for on-campus instruction and activities is being lived out daily by students, athletes, teachers and parents. With the lofty expectations for spring sports to the countless hours of dedicated practice and academic studies, makes the sudden loss seem more real.

From freshmen taking part on the 4A level for the first time to seniors ready in showcasing their accumulative talents, the time devoted for improving oneself beyond the lines will not show up in the scorebook this season.

For seniors like Rivera, there will not be a time-honored spring chapter to close out his Grizzly 2020 yearbook when he reflects upon those memorable moments and defining achievements.

“Coming into the season, I knew it was going to be a good one due to what happened last year. I was sitting there at a good place. With all this happening, I understood, and I knew that I had to move forward,” the incoming Eastern Washington University freshman reflectively communicated.

Sunnyside’s only 4A state multi-event placer in the 100 and 200-meter last season, Rivera also ran on the boys 4X100 and 400-meter relay team. The two-sport athlete’s cross-training regimen did not include time off after playing wide receiver and defensive back for the Grizzlies’ 2019 Columbia Basin Big Nine (CBBN) Co-Champion football team.

“The end season is the product of the offseason. However hard you work in the offseason is what you’re going to get in the end season,” the school’s record holder for 206 receiving yards in a game and 2019 CBBN League Co-Most Valuable Football Player acknowledged.

His determined goal was to improve upon his fourth and seventh place finishes, prior to setting out for EWU’s summer football camp where he will be competing to earn a roster spot on the Eagles’ team.

Instead, Rivera said he has been at home, staying healthy and working on completing scholarship applications with plans to study and pursue a career as an athletic trainer or physical therapist. His uncle is an athletic trainer and teaching him more about the profession – advancing his scholastic focus during this uncertain time.

“My mom is definitely on me about chores and stuff, so I’ve got to get that done as soon as possible,” he reported. “I would rather go to school; I’m not going to lie.”

Like a track and field starter’s pistol signaling the commencement of a competitive race, this distinctive phase of scholastic accomplishment will be remembered for students and spring sports athletes striving to slow down the spread of the coronavirus disease and winning to save lives – a new Class of 2020 standard on display, every Friday night through graduation.