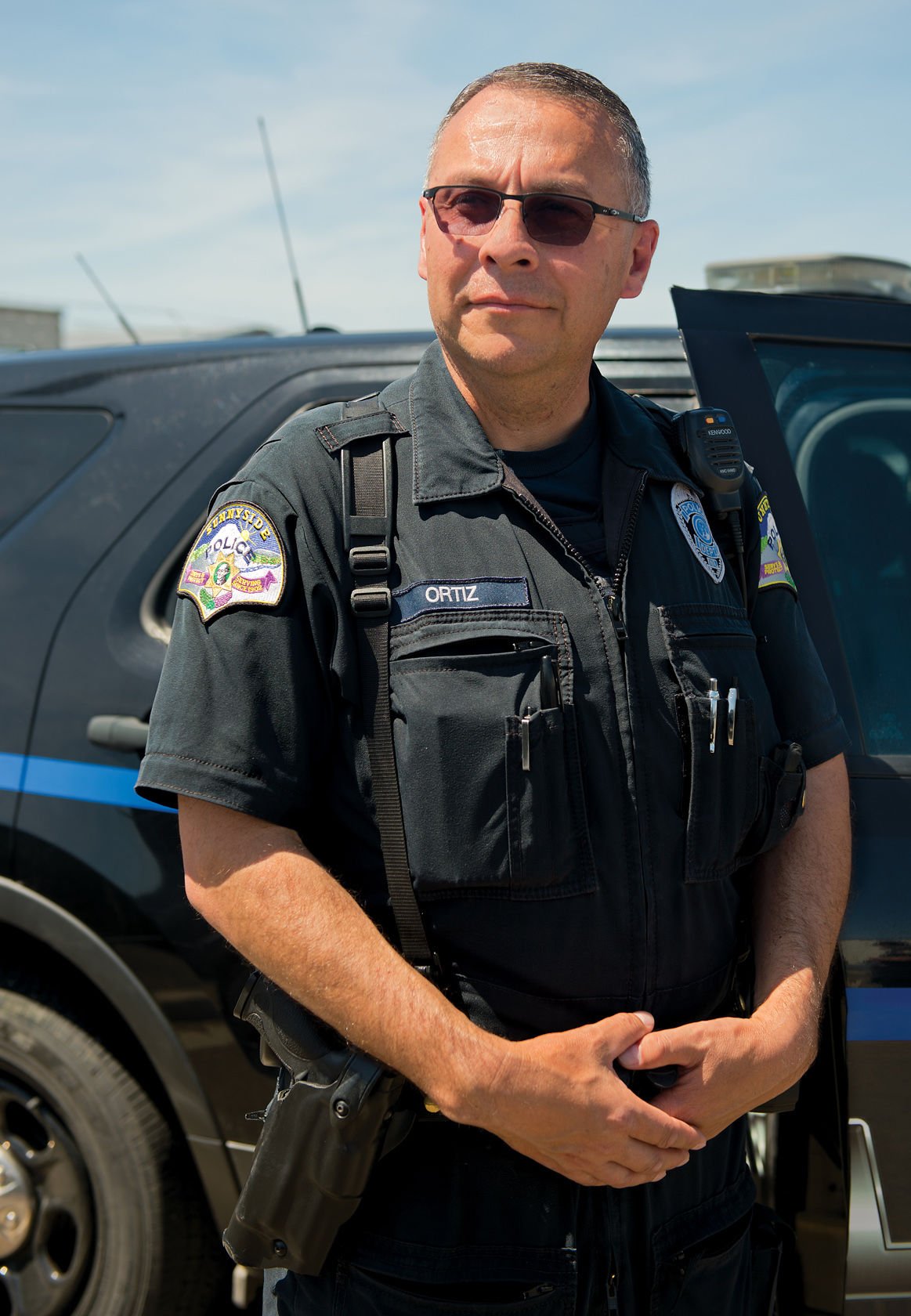 POSITIVE LAW ENFORCEMENT CONNECTION — Former Sunnyside Police Officer Jose Jaime “Jim” Ortiz retires after 26-years and recommends having a healthy hobby to accompany a successful career. Ortiz plans to restore a 1979 Pontiac Trans-Am, one of many projects on his honey do list. 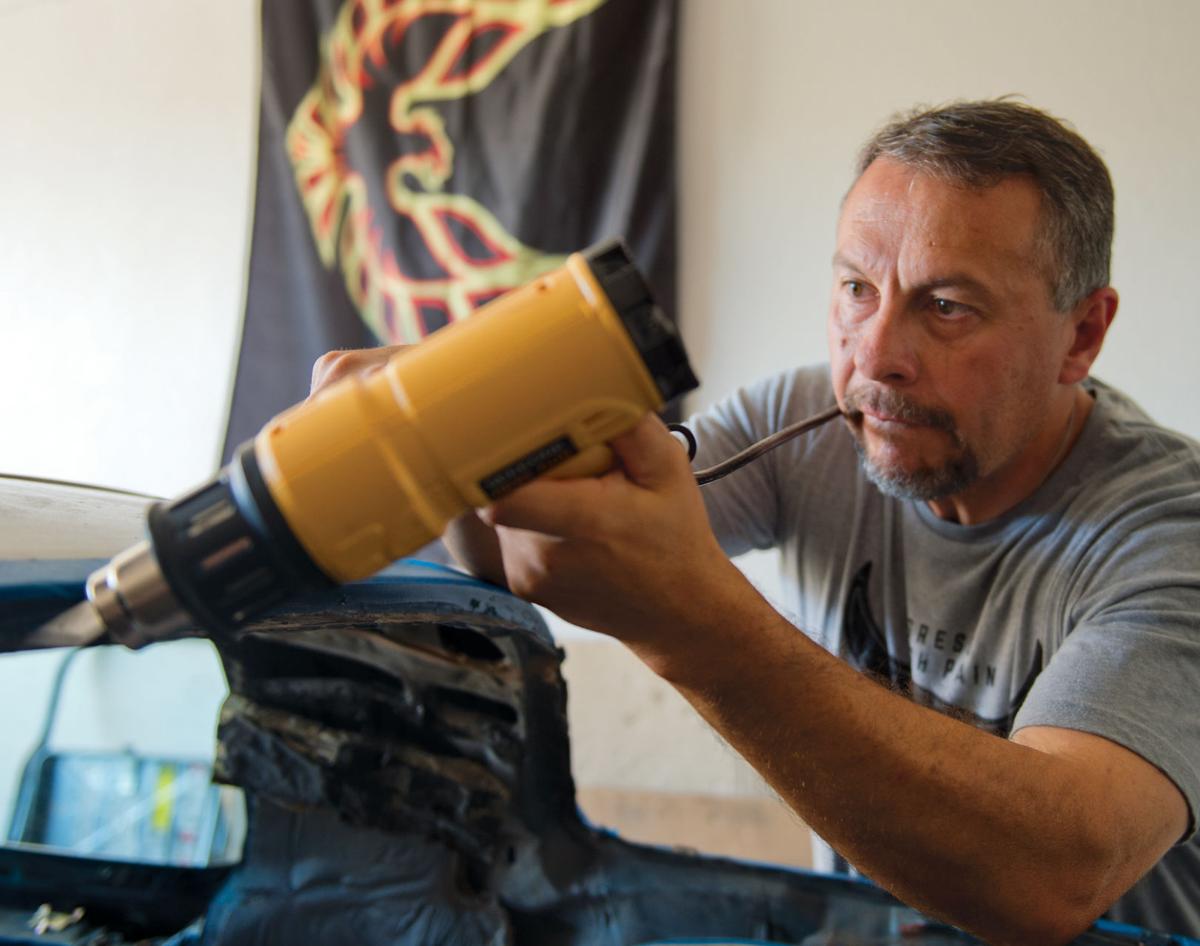 FIREBIRD FAN — Ortiz takes the heat gun to the old rear window adhesive and scrapes it out before he sets in place the new piece of glass. The classic car and garage enthusiast advocates, “You have to have something that grounds yourself.”

POSITIVE LAW ENFORCEMENT CONNECTION — Former Sunnyside Police Officer Jose Jaime “Jim” Ortiz retires after 26-years and recommends having a healthy hobby to accompany a successful career. Ortiz plans to restore a 1979 Pontiac Trans-Am, one of many projects on his honey do list.

FIREBIRD FAN — Ortiz takes the heat gun to the old rear window adhesive and scrapes it out before he sets in place the new piece of glass. The classic car and garage enthusiast advocates, “You have to have something that grounds yourself.”

SUNNYSIDE — Pushing through barriers to make a positive law enforcement connection with the community he has dutifully served during the past 26-years, police officer Jose Jaime “Jim” Ortiz made his last two-way call and thanked Sunnyside residents for entrusting him with their families’ safety.

“Be healthy, take care of each other and most importantly, be safe. (Badge No.) 2131 Sunnyside, I’ll be off duty 10-7, thank you,” Ortiz openly transmitted while officially announcing his retirement at 11:01 a.m. on Friday, May 29.

Dispatch responded with a brief highlight of his career and training accomplishments as detective, Special Weapons and Tactics (SWAT) member and department gang expert.

The 53-year-old Ortiz was ready for retirement and his honey-do list of projects from restoring a 1979 Pontiac Trans-Am, learning how to weld and most importantly, taking a more active part in the daily care of his five and three-year-old sons, Jordan and Jayden. He thanked his fellow officers and with that final transmission – or so he thought.

His wife Sandra, who is the Director of Instructional Programs at Sunnyside High School, timely engaged with a police radio call of her own. “It’s a privilege to be able to be here today on my husband’s last day of work. Most people know that Jim Ortiz has been a hard-working police officer. In fact, he was the guy to call when you needed someone to come in,” she clearly described while detailing her husband’s dedication to the job, family and personal health sacrifices he made as a cop.

The veteran lawman was momentarily caught off guard and pleasantly surprised when he heard Sandra’s voice over the radio. This is the second marriage for both Ortiz and Sandra. He has three grown up kids from a previous marriage and she has one. All of them have gone to college.

In her direct transmission, she reminded him and anyone else listening about the time when his mother lost her battle with stage 4 breast cancer earlier in the day, he reported for duty that night.

Once again, Sandra retold listeners of how he answered the call of duty after their sons’ births. He brought them home from the hospital and with his wife’s mother and aunt there to help, Ortiz didn’t skip a beat and went right back to work.

Doctors stopped the rhythm of his heart during coronary quintuple bypass surgery on March 7, 2019, and for the first time, Ortiz was completely immobilized, except for the machine in place to circulate his blood.

Contrary to the advice from his cardiologist about taking time off to fully recover, which could take a minimum of one year, Ortiz held steadfast to return to the job like he has previously done. “Six months later he went back to work, full-time and full duty,” Sandra revealed.

A career in law enforcement wasn’t even a blip on the radar screen for Ortiz, whose two older brothers were arrested for assaulting a police officer while in college. His brothers filed an excessive use of force charge as witnesses corroborated their story and won the legal case.

He graduated with a Bachelor of Arts degree in geography from Eastern Washington University in 1992. Ortiz was considering the forest service field until a cousin suggested he return to college and take a few criminal justice classes.

“I went back and enrolled in the Criminal Justice program at Eastern and I fell in love with it,” he explained. His brothers chided him about becoming a “Pig” following their horrific contact with police where an officer used a baton on his brother’s head, which left a big scar across his forehead.

Ortiz began his police force career with the City of Spokane after graduating from the Law Enforcement Academy in 1994. The rookie was released during his six-month probationary period for not meeting department standards.

The first indication that something was amiss at the start of his employment there was when he noticed his picture was the only one missing from the wall with all the other officers.

“They were having, I guess, issues with hiring people of color in Spokane at that point,” Ortiz acknowledged.

His sister was living in Sunnyside at the time and she informed him there was a job opening for a patrol officer. Ortiz applied for the position and one with Walla Walla. He was hired on and fell in line with the department immediately. “There were actually Hispanics on the force,” he said.

After the incident in Spokane, Ortiz pledged his allegiance to Sunnyside which was tested shortly thereafter when Walla Walla contacted him and attempted to lure him away with a higher salary.

The gang problem which plagued the area back then when he started as a patrol officer was ugly, he reported. Kids didn’t ride their bikes in the neighborhoods or at the park out of fear.

“People were afraid to go out onto the streets because of the drive by shootings and the gangs,” Ortiz revealed after police regained control of the area problem and again in 2005.

“Initially, it was pretty rough out here on the streets. You come in and have to get it done,” he admitted.

Once the city streets were safe again, his patrol responsibilities expanded to include more community interaction in creating positive agency connections.

“I loved getting out of my car,” Ortiz cheerfully voiced, illustrating how he would walk into businesses and speak with the public. His outreach efforts also received negative assessments from his peers for taking time away from writing tickets, he said.

Along the way, Ortiz continued to drive forward his educational pursuits as he completed a master’s degree in counseling at Heritage University in 2007. Sandra has encouraged him to use his psychology credentials and police background to help other officers who are having difficulties in dealing with pressures of wearing the badge, he communicated.

Social injustice demonstrations created since the death of George Floyd, a 46-year-old black man in the custody of Minneapolis police on May 25, has focused national attention on a wide range of racial and policing issues.

“I think everyone in law enforcement is in agreement that was wrong, that was wrong,” Ortiz stressed. “I get it. I understand it. We (police) get it!”

From the living room couch, he’s now watched news reports as a citizen and retired cop about young people protesting for positive change. The former officer sees there are some individuals and small groups within the movement trying to detract from the nonviolent message being voiced.

Ortiz identifies with the parallel theme between police and peaceful protestors. “I just kind of look at that and you know what, that’s incredible because that’s what we’ve been saying about the bad apples. It’s not all of us… We’re not all bad, evil cops, it’s a small group.”

For the time being, Ortiz is content recuperating at home and acclimating to maintaining a watchful eye on their two sons. Sandra can now work from the family office, participating in online meetings with the door closed.

“Jim, you reached the finish line. And though your law enforcement career is ending, it is a beginning of a new chapter,” Sandra encouragingly conveyed. “But most importantly, you will get to spend time with those that have made the biggest sacrifice, your family. And especially, your kids. After 26 years in law enforcement, officer Jim Ortiz badge number 2131, it’s time to go home.”

This community took a chance on me and so I basically pledged my loyalty to the community and stayed.