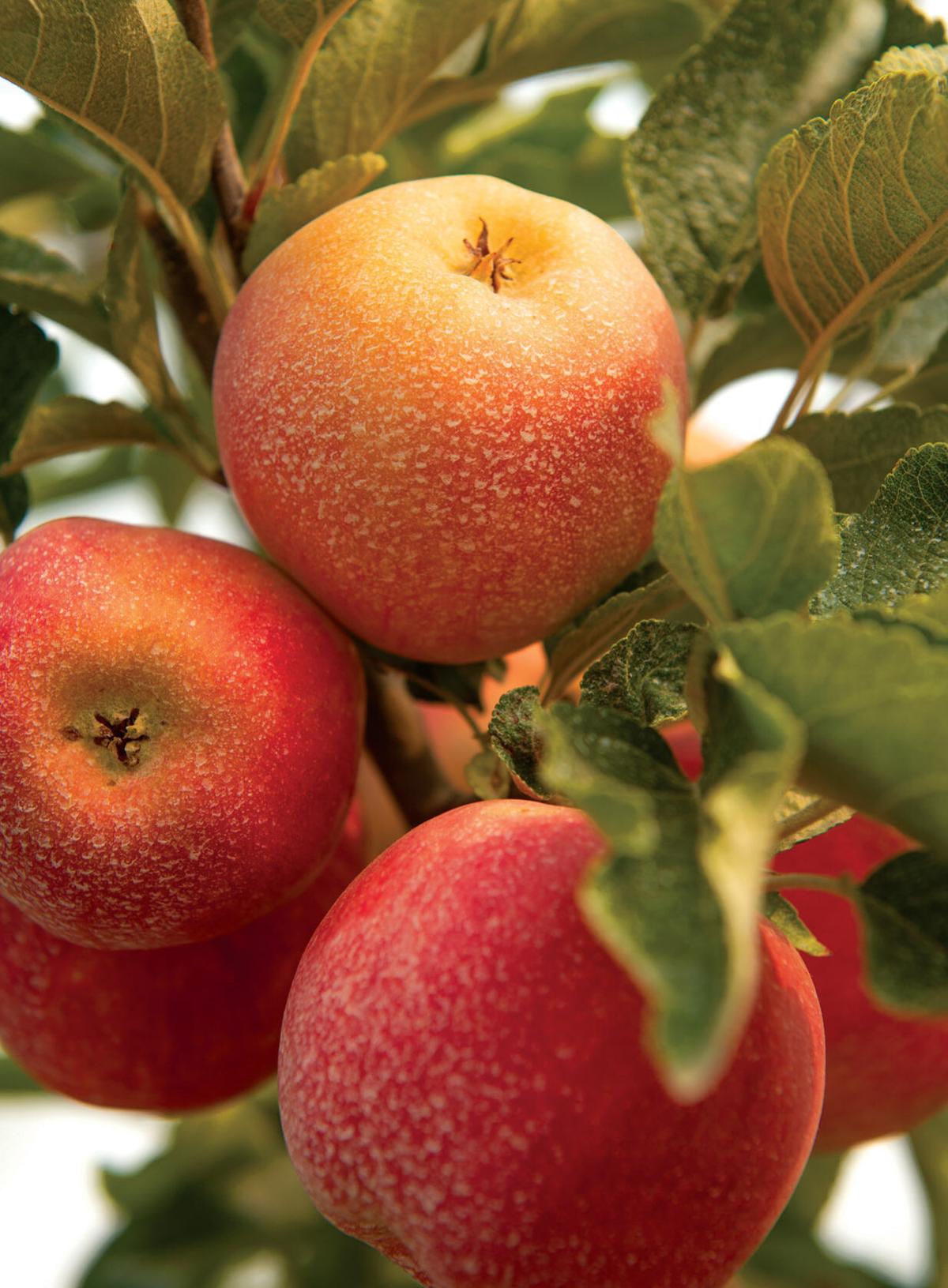 AMBROSIA BI-COLOR APPEAL — The golden yellow and warm red color of R & H Farm’s Ambrosia apples originated from the Similkameen Valley of British Columbia and were discovered in 1987. According to Washington Fruit & Produce Company, Ambrosia apples are known for tasting sweet as honey. They’re crisp and juicy, and mildly aromatic. 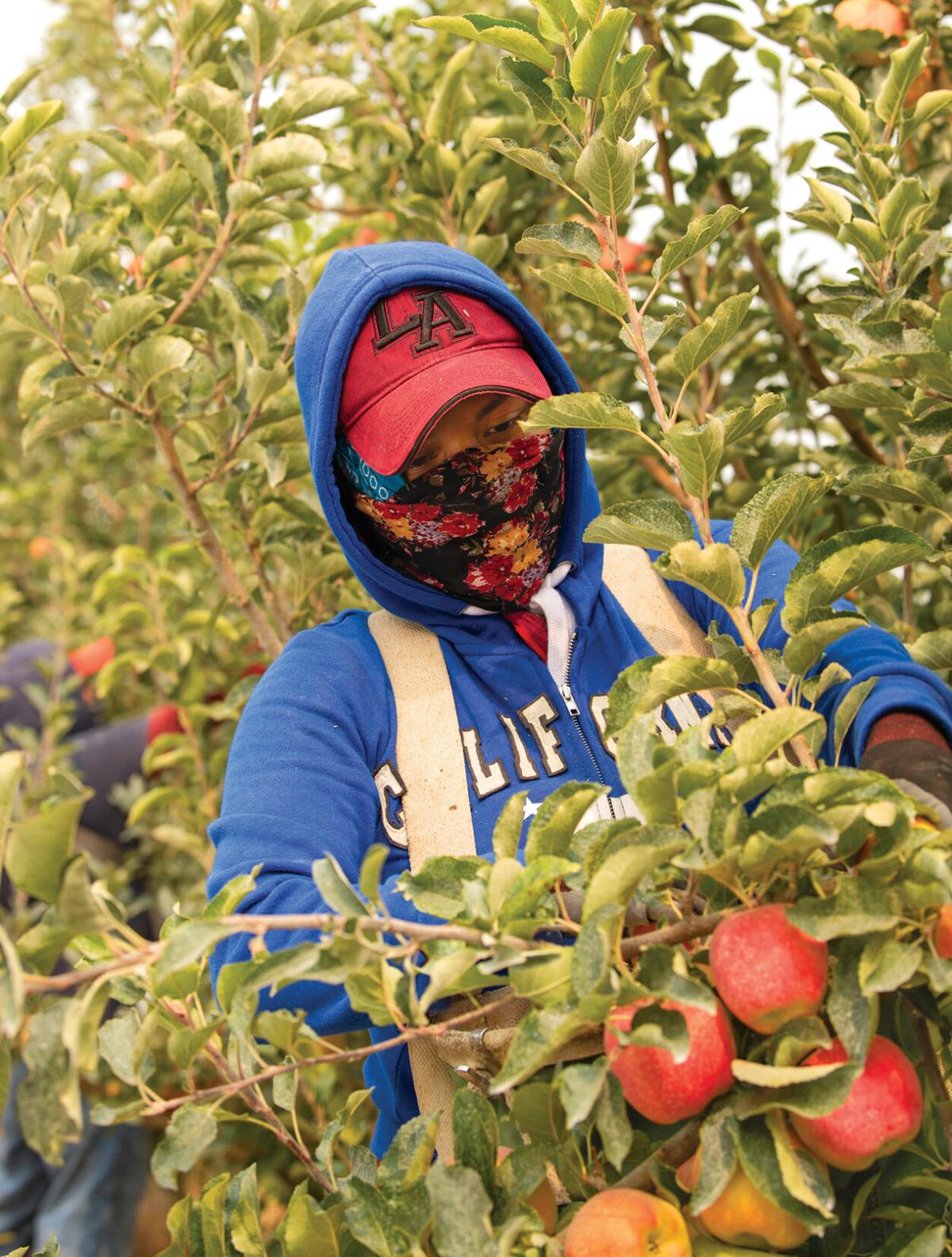 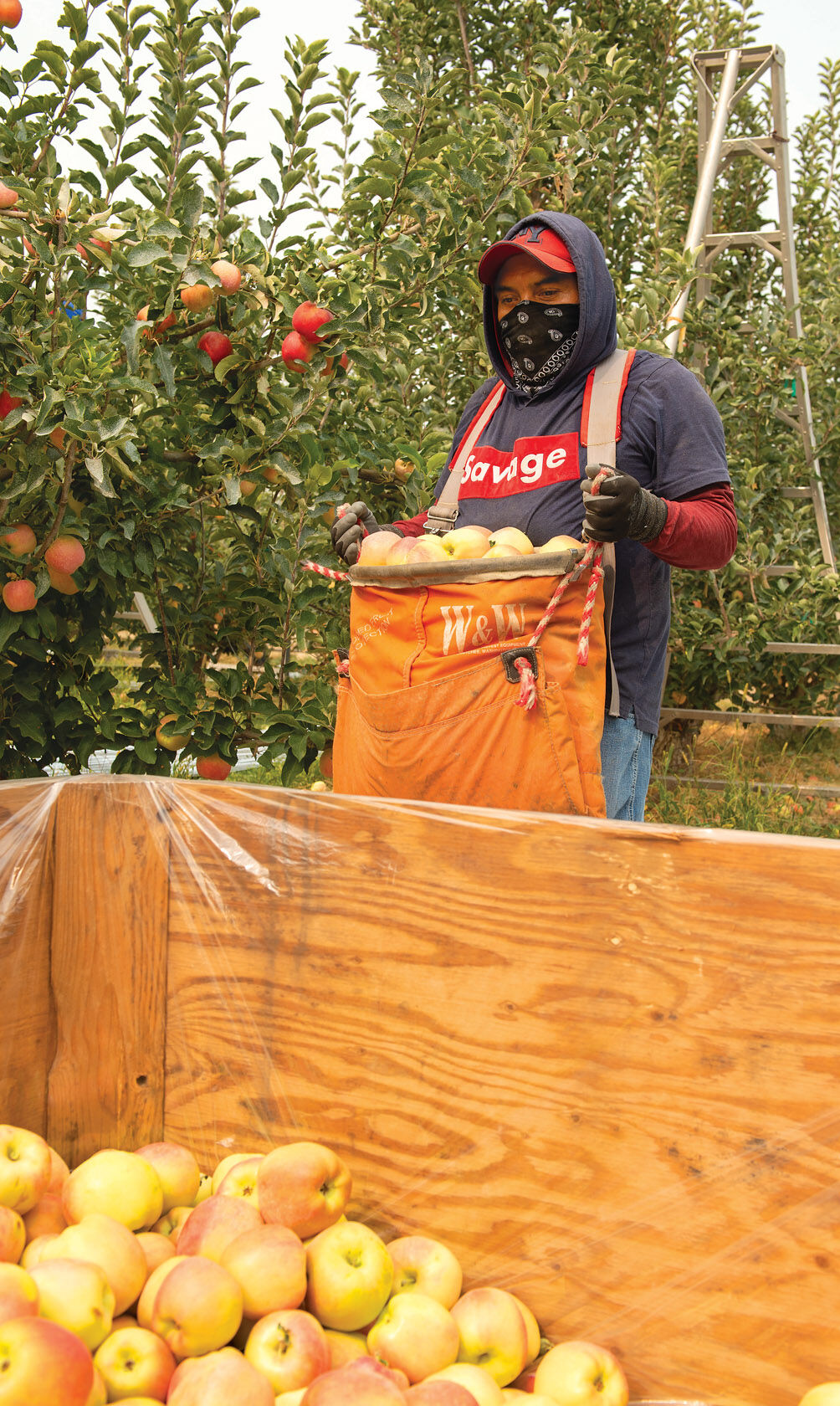 PICKING BAG OVERFLOWS — Crew members select only the ripe fruit from the more than 4,000 trees on the 10-acre orchard and gently place inside the centrally located bin. 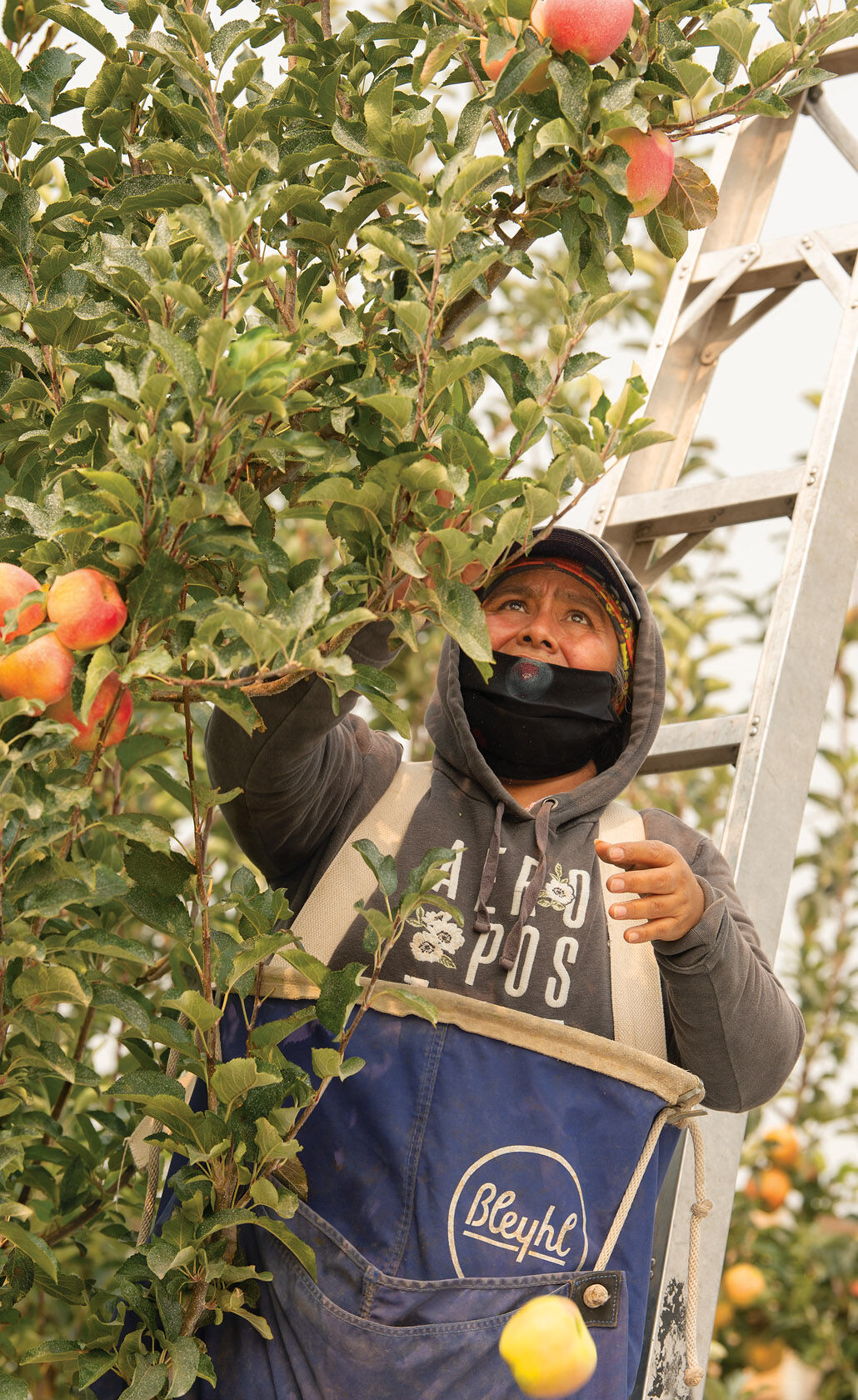 AMBROSIA BI-COLOR APPEAL — The golden yellow and warm red color of R & H Farm’s Ambrosia apples originated from the Similkameen Valley of British Columbia and were discovered in 1987. According to Washington Fruit & Produce Company, Ambrosia apples are known for tasting sweet as honey. They’re crisp and juicy, and mildly aromatic.

PICKING BAG OVERFLOWS — Crew members select only the ripe fruit from the more than 4,000 trees on the 10-acre orchard and gently place inside the centrally located bin.

GRANDVIEW — The first pass of 10 acres filled with more than 4,000 Ambrosia apple trees were selected for mid to late harvest from their colorful ripeness by 13 fast-moving crew members at R & H Farms starting at 6:30 a.m. on Thursday, Sept. 17.

The ruthless Labor Day windstorm which ravaged the lower valley on Sept. 7 with sustained speeds of 30 mph and gusts up to 45 mph resulted in considerable damage to the battered and beaten orchards with rows of fallen apples scattered over the ground.

“I lost almost half of the crop. You could see all the apples on the ground, and it looked pretty bad. There’s nothing we can do,” part-time farmer Rudy Hurtado described with renewed optimism while a responsive team of pickers were inspecting and removing the ripened and unharmed fruit underneath a dissipating smokey sky.

There were unripe apples mixed with bruised ones which were left on the trees to be picked during a second and possibly third pass in the upcoming weeks. Hurtado said he’s been growing Ambrosia apples for the past two years and the fruit bruises easily, effecting quality and grocery resale.

His orchard foreman reported that the golden yellow and warm red color of their Similkameen Valley of British Columbia originated apples were “really nice” and riper than most in the surrounding area.

“I sent my fruit to Washington Fruit this year and their representatives said they’re picking about three miles away and its green. They’re not even close to mine in color. I don’t know why but I did something right,” Hurtado laughed.

In early August, the first estimate for the state’s 2020‑21 apple crop predicted a crop volume of 134 million boxes (40 lbs.), on par with the previous season of 133 million boxes, according to the Washington Apple Commission.

Since the time of their initial estimate, expectations are now for a 5-10% reduction in crop volume because of the adverse weather events.

The commission reports harvest typically begins mid-August and lasts into November. Galas, the most numerous varieties, began picking in late August and have since moved on to Honeycrisp. Red Delicious, Fuji and Cosmic Crisp will be harvested in October and the season will wrap up with Granny Smith and Cripps Pink in November.

The selective grower, who has two additional plots of Pink Lady orchards on 15-17 acres in Whitstran, grafted the Ambrosia apples onto his Granny Smith trees after the market went south for the tart and crunchy green varietal, he conveyed.

Hurtado is a full-time manager with Golden Gate Hop Ranch in Prosser and has worked at the one and only company for 40 years. The passion for farming was instilled by his father at an early age and when the time was right to field his own parcel of land, he initially decided to grow cherries like his two brothers, he acknowledged.

“I started with cherries in 1999. I’m not very good growing them, so I gave up and began growing apples,” he candidly explained. “We like what we do and that’s how we got started. We just followed my dad’s path.”

"I’ve been here 40 years and never saw winds like these at this time of the year. It’s a pretty sad deal but there’s nothing we can do."