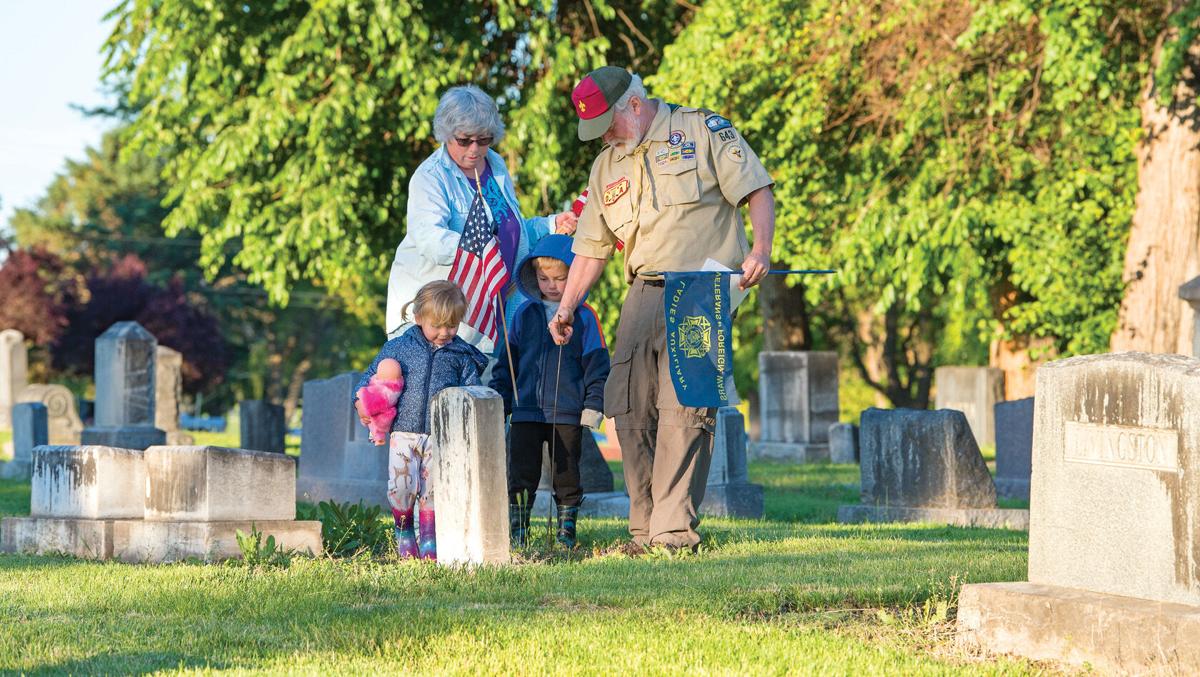 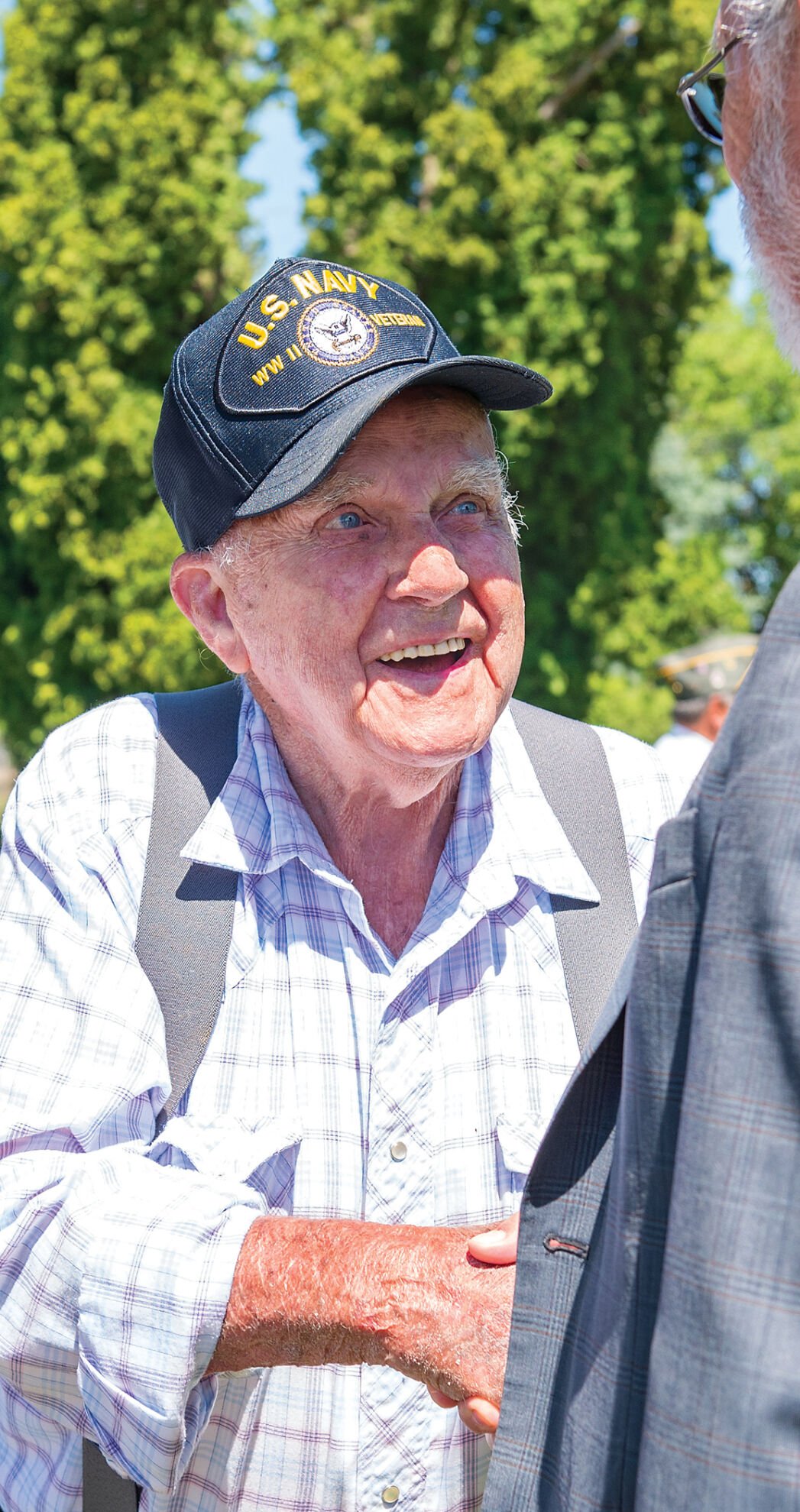 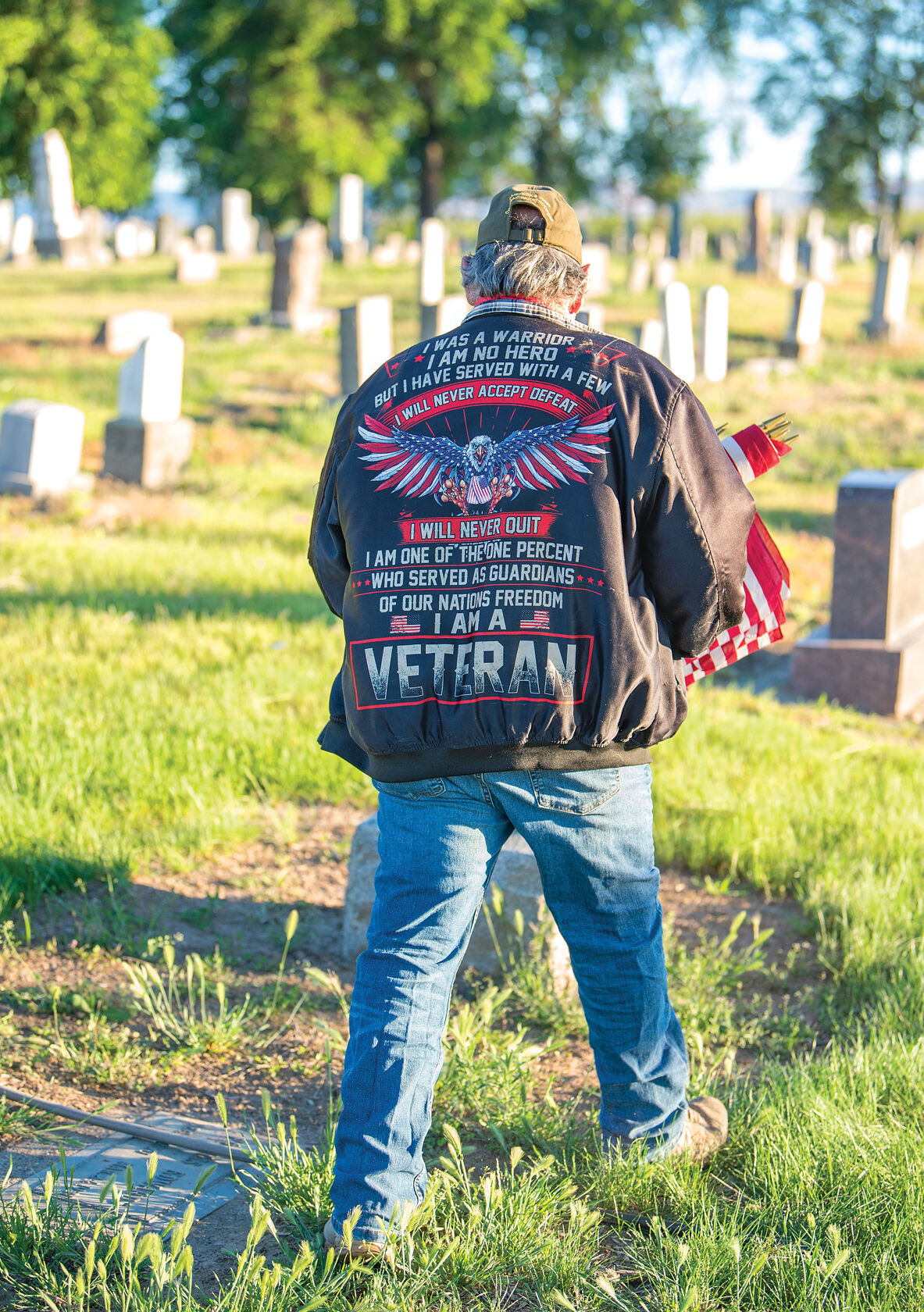 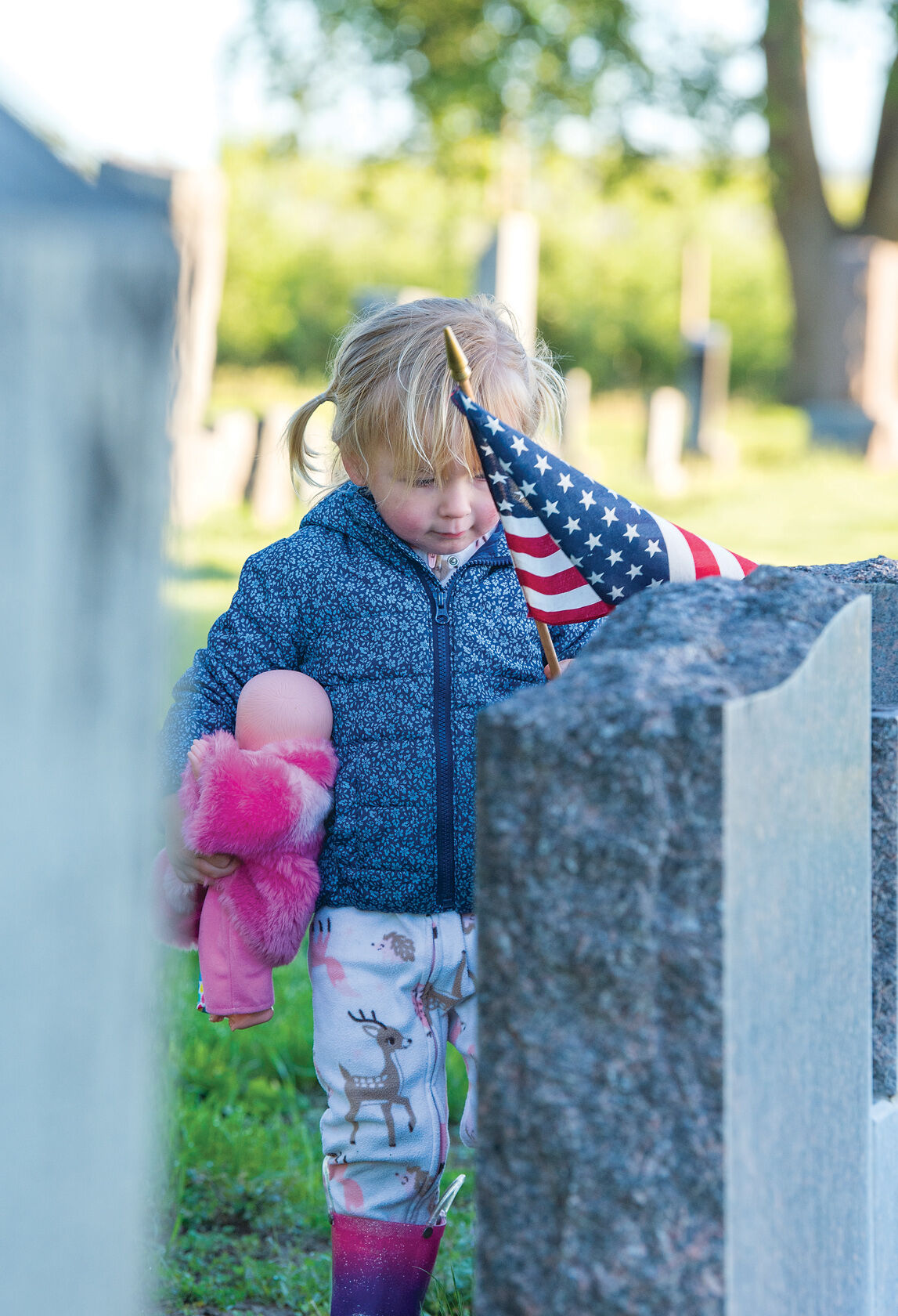 Emma Shad carries forward the patriotic tradition of honoring veterans for their dedicated service and sacrifice to country. 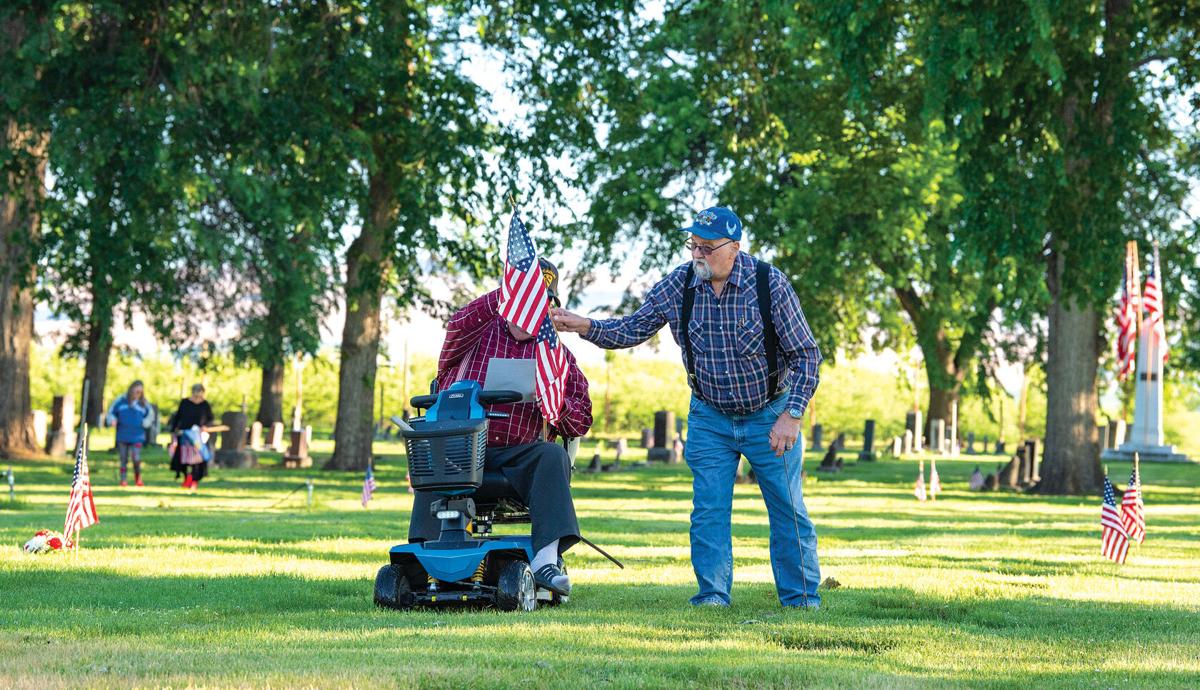 Gene Lange and Loren Bishop work together and commemorate hometown service members with flags of remembrance prior to Monday’s 11 a.m. Memorial Day service.

Emma Shad carries forward the patriotic tradition of honoring veterans for their dedicated service and sacrifice to country.

Gene Lange and Loren Bishop work together and commemorate hometown service members with flags of remembrance prior to Monday’s 11 a.m. Memorial Day service.

Veterans’ groups and their families and friends gathered Saturday morning and placed more than 1,650 American flags on the graves of veterans buried in Sunnyside, recognizing their military service with advanced honor for Memorial Day remembrance events.

“I served and the ones who are laying here served: it’s to honor them. That’s the important thing - Remember. Because there are so many people that are forgetting any more it’s just disgraceful,” Steve Harrison expressed, who served in the U.S. Army 509th Airborne, 8th Infantry Division, Mainz, Germany during the Vietnam War.

Veterans of Foreign Wars, the American Legion and the American Veterans were joined by a small group of 12 volunteers for the annual 6 a.m. patriotic tradition at the Lower Valley Memorial Gardens Cemetery on Van Belle Road.

“We’re here to support the veterans and their families. It’s an honor to be out here and get to do this,” Sunnyview VFW Post 3482 Commander Bill Ingram stated.

The public has always been invited and is strongly encouraged to participate, along with their children and grandchildren. The goal is to teach them about the sacrifices made by America’s veterans, and because of their service to our nation, we are free, the commander said.

Tim and Ann Bardell brought their grandchildren, two-year-old Emma and four-year-old Oliver Shad to the red, white and blue tribute of enlightenment.

“There’s over 1,600 flags out here. So, you know there are a lot of families and while some of them are deceased but still there are others who could be out here helping. This is a real slack year, and I can’t figure it out,” Ingram acknowledged.

He recalled there were about 35 people that came out to help last year as the country battled the COVID-19 pandemic.

The VFW hall at 615 North Ave. was closed for nine months. During that time, they were unable to generate revenue from food and drink sales. The post was forced to set up a GoFundMe page in July to help raise a minimum of $5,000 by the end of the year to pay for utilities and remain open.

“It’s got to continue. I mean the good Lord, he’s going to take us sometime, so we’re hoping some of the younger people will step forward and fill in for us,” Ingram indicated.

VFW member Phil Hill added, “We need younger individuals to get involved. We’re all in our 70s and 80s and can’t do it forever.”

Both men are also part of the Lower Valley Color Guard, who perform a 21-gun salute at funerals, holiday programs and parades, and are finding it difficult to find new members for the prestigious group.

“We’re hurting for people to step forward and help. We’ve got a couple of guys in their early 90s that were coming out to shoot and fill in,” Hill urged.

Shortly after 8 a.m. around half of the flags had been placed. Sharon Hallam, treasurer of the VFW Ladies Auxiliary 3482 called Ingram to check on the group’s progress in preparing breakfast for those who helped place flags.

She was informed of the situation and advised the celebratory meal would now be pushed back about 90-minutes to ensure a healthy appetite.

In year’s past, usually around 8 a.m., they would have completed the flag placement exercise.

As volunteers returned to the pickup’s tailgate of flags, everyone was reminded that the invitation to come over to the VFW was an unwavering offer with a purposeful meaning – to share time with each other over a friendly meal and a hot cup of coffee, and maybe share a few stories from their days in the military, Ingram pointed out.