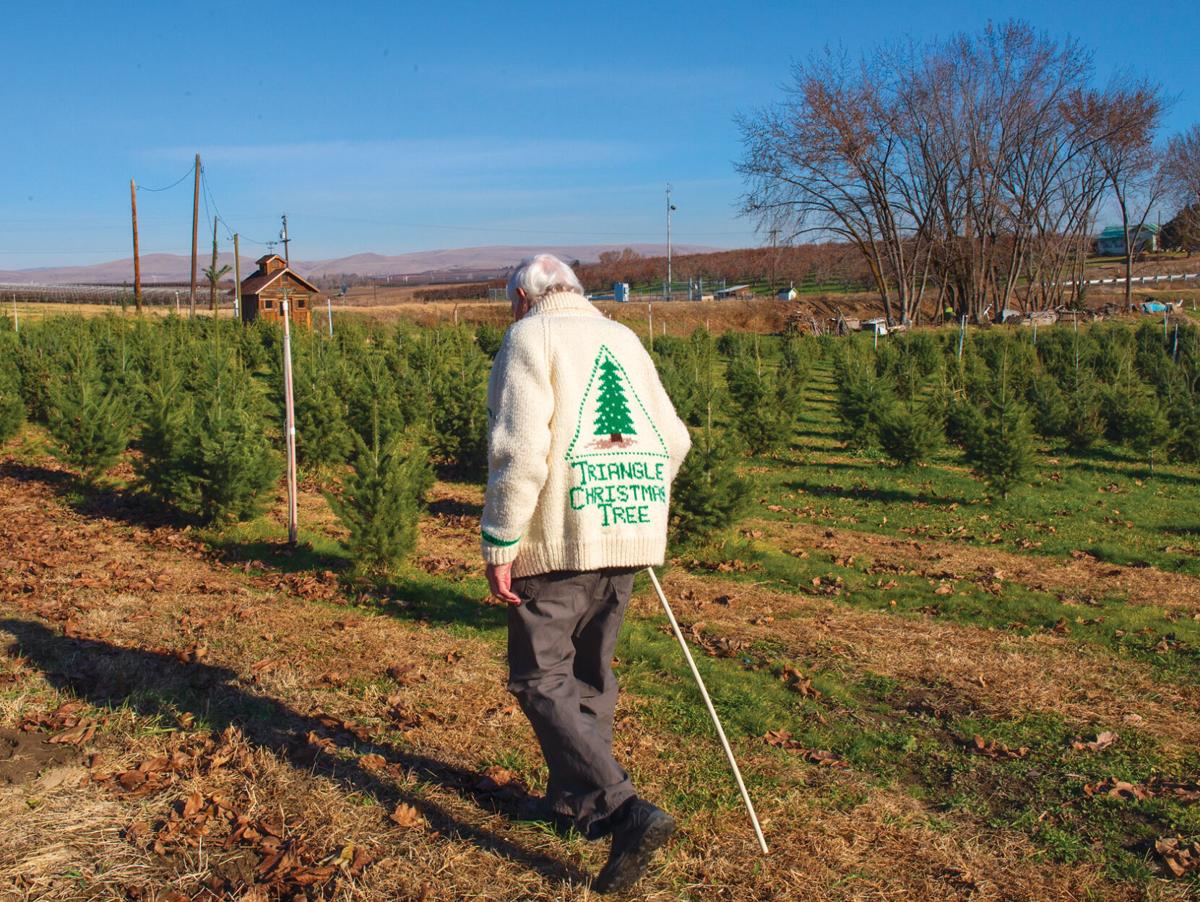 GRANDFATHER CHRISTMAS — Proudly sporting his Triangle Christmas Tree cardigan, Greg Elsen has been bringing the joy of Christmas trees to families for over 40 years. The business has become a tradition with his children and grandchildren, ensuring the spirit of the holiday will live on through the family. 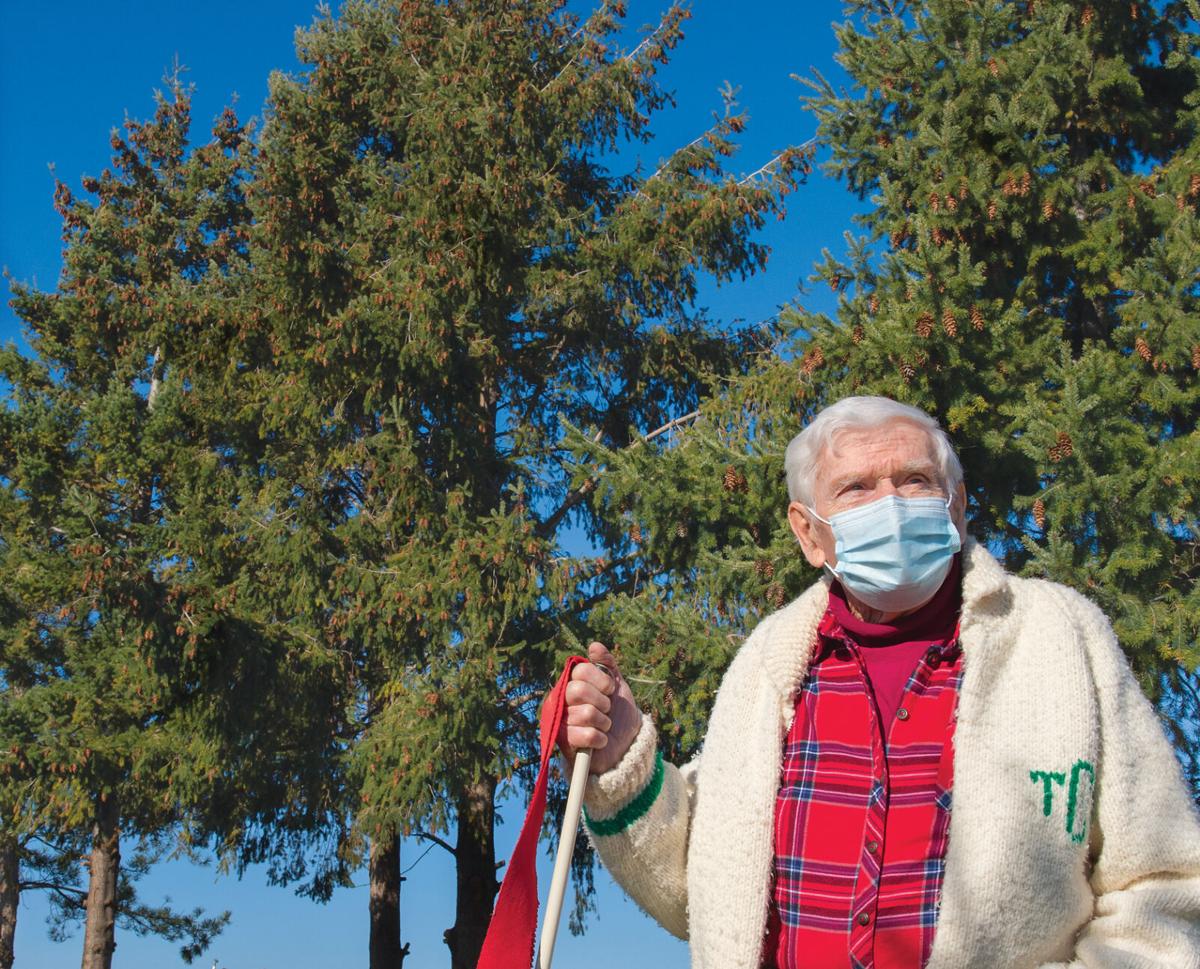 "I’ve got this piece of dirt and I still got help. It isn’t worth much else as a grape vineyard or an apple orchard or anything like that. A lot of people just enjoy coming out and I enjoy working out there." 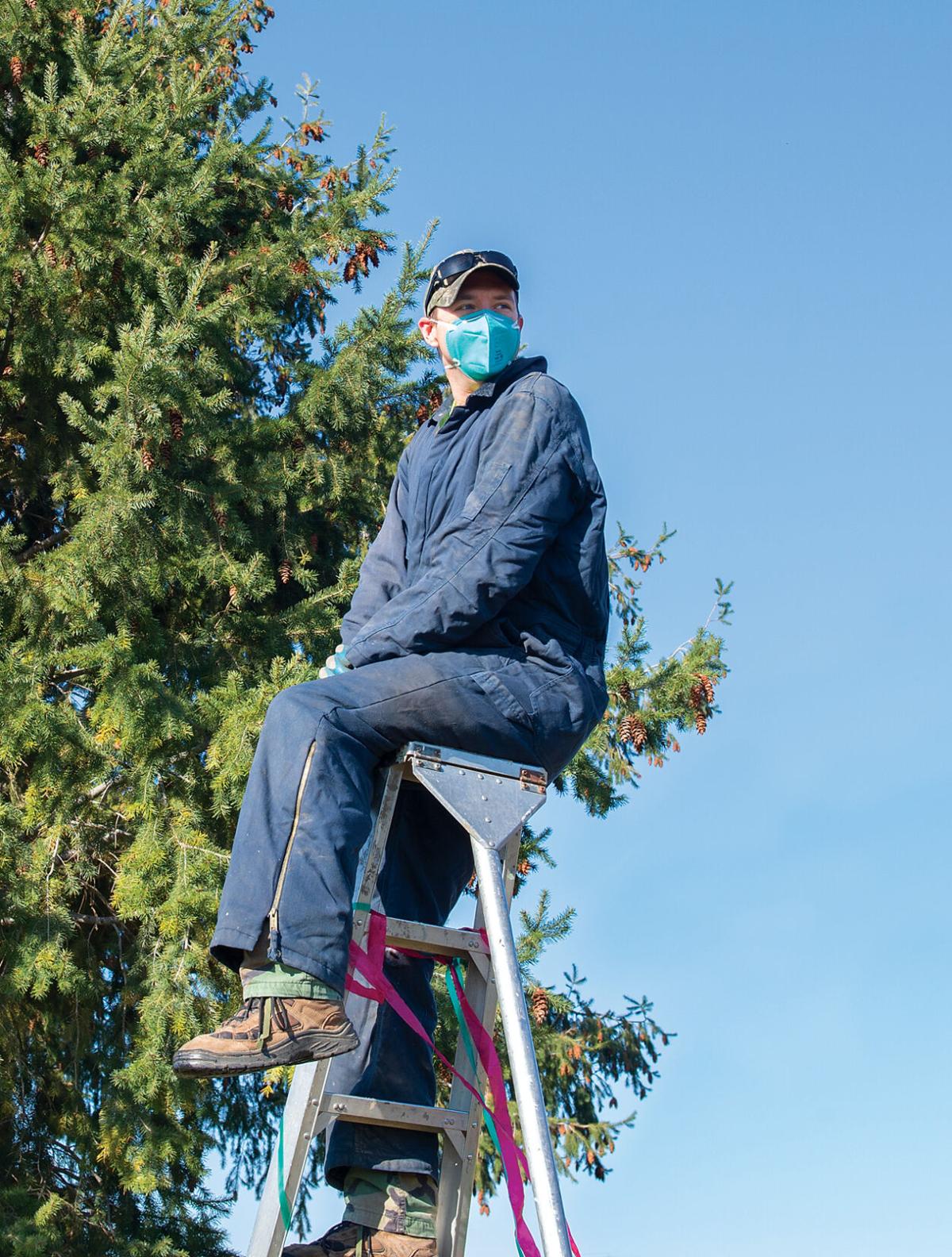 AS TALL AS A TREE — Trees are selected by visitors waving a red flagpole that Ryan Masengale, positioned on a ladder, surveys on the farm. Once visual acknowledgement has been made, he brings over the electric chainsaw and proceeds to cut it down at $25 a tree, regardless of size.

GRANDFATHER CHRISTMAS — Proudly sporting his Triangle Christmas Tree cardigan, Greg Elsen has been bringing the joy of Christmas trees to families for over 40 years. The business has become a tradition with his children and grandchildren, ensuring the spirit of the holiday will live on through the family.

"I’ve got this piece of dirt and I still got help. It isn’t worth much else as a grape vineyard or an apple orchard or anything like that. A lot of people just enjoy coming out and I enjoy working out there."

AS TALL AS A TREE — Trees are selected by visitors waving a red flagpole that Ryan Masengale, positioned on a ladder, surveys on the farm. Once visual acknowledgement has been made, he brings over the electric chainsaw and proceeds to cut it down at $25 a tree, regardless of size.

ZILLAH — There is a joyful, three-point message shared with each Douglas fir tree selected for harvest by the multi-generations of families searching to inspire their Christmas traditions while visiting the friendly, five acre farm where Yakima Valley Highway and the home at 1241 Roza Drive connect.

The meaningful purpose comes from the cone shaped parcel at Triangle Christmas Tree Farm, which was cultivated more than 40 years ago by Janet and Greg Elsen with the highest point of the triangle reserved for God, he faithfully acknowledged while sitting at the welcoming family room table.

Elsen recalled the idea to grow Christmas trees came from reading the Capital Press newspaper, a weekly subscription based agricultural publication. The single edition he read at home featured a profile on the tree growing business.

Asked if the Christmas trees might have found him instead of the other way around, the farmer conveyed, “It’s possible. Because why I ended up with the Capital Press is still a mystery.”

He was immediately motivated to attend a couple of association meetings and soon afterward implemented a plan of his own.

“I had my wife and son out there with me planting trees. And we did it all by a string and a shovel and boy, there’s a lot of trees in a thousand,” Elsen candidly remembered, planting back in 1980.

“I thought you plant them and stand back. Establish the bank account and it will all happen. Well, let me tell you. The story is a lot longer than that,” he expressed with a bellowing laugh.

By July 4, they had a farm of red firs, the term he used to describe dead trees, Elsen explained.

He discovered there were two species of Douglas firs, which are evergreen trees. That means they keep their needle-like leaves year-round.

The Cascade Mountain range was the dividing line between the two varieties.

Rocky Mountain Douglas firs are the inland variety that grow in the mountainous Pacific Northwest and in the Rocky Mountains. They are much more tolerant of cold than the coast Douglas fir, which is suited to moist, mild climates on the west coast.

“I thought, you know, a tree is a tree and an evergreen, they grow all over,” Elsen recounted.

Originally from Minnesota, Elsen served in the U.S. Army at Fort Lewis near Tacoma when he met Janet, “A great woman here,” he lovingly described.

Following his military service, the couple wed and moved into their rustic home around 1961 or 62, the energetic 88-year-old said. They raised three children and were married for 63-years.

Elsen, who worked in the area fruit orchards and was tired of getting whacked in the head by hearty apple branches reminisced, “I’m not sure I had a vision back then,” he warmly laughed. “I wanted to grow something so I could get me a tractor.”

Following the couple’s second planting of trees, six to eight years went by before the trees grew to a size that were favorable with family celebrations.

Ryan Masengale excitedly stated, “I’ve been out here every year I’ve been alive. I’m 28-years-old and this is will be my thirtieth season.”

“We want to find every tree a good home,” he added.

The youngest grandson explained his mother was pregnant at the time and she was out there cutting down trees before giving birth to him in January. Masengale counts that shared exercise as his own, even though he didn’t technically cut down his first Christmas tree until he was 13-years of age.

After talking with his brother last year, he was reminded how this seasonal role of coming out to the farm and selling Christmas trees is his calling. “This is what I do,” the seasoned farm hand reported. “This is who I am.”

Trees are selected by visitors waving a ceremonial red flagpole. Masengale is usually the family member positioned on a ladder and surveys the farm. Once visual acknowledgement has been made, he brings over the electric chainsaw and proceeds to cut it down. As soon as the powered saw is revved up, the $25 purchase – regardless of size – has been made and is ready for the new owner to load.

Their paramount goal is to create a healthy environment where the spirit of Christmas is allowed to shine bright for everyone to experience.

“We’ve had families come down here when we first started, mom and dad and the kids. They come back over the years and (dad) says I’m grandpa. Still coming back to buy trees here,” Elsen engagingly voiced. “That way it’s got quite a story. The children without grandpa are now bringing their children.”

This year with COVID-19 restrictions in place, face coverings are to be worn outside, hand sanitizer for both farm staff and the public will be used, and immediate family members in small groups to follow social distancing protocols while maintaining a safe distance from others.

Trees chosen and cut on the first day will remain green through Christmas as long as they are watered, according to Masengale. “Right after you get the tree into the house, it drinks a lot of water that first couple of days. So, you have to keep a close eye on it,” he recommended.

Another helpful tip for extending the life of the tree is to add some hot water with a cup of sugar, Masengale added.

When it’s time to come home for the holiday season, there’s no place Masengale and the rest of the family would rather be than helping to keep the spirited message resonating brightly at Triangle Christmas Tree Farm.