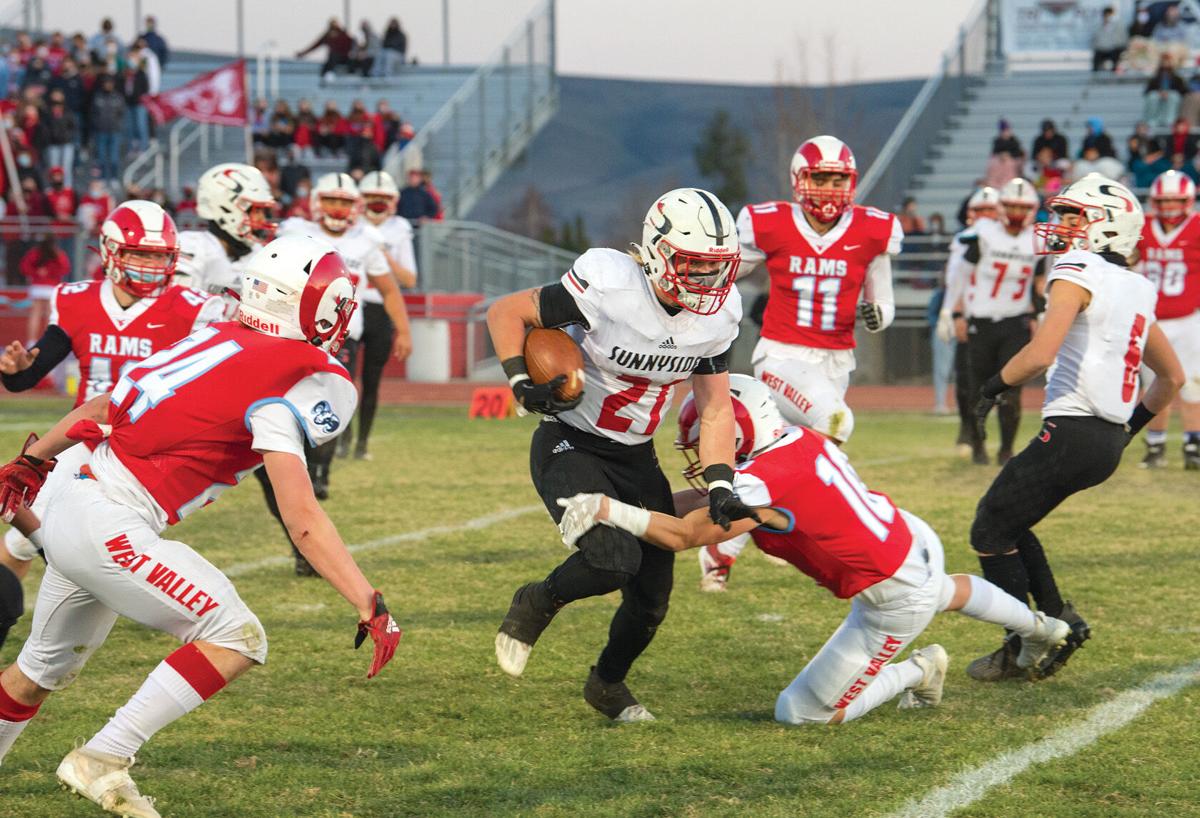 SHS junior running back Myles Newhouse powers his way into the Rams’ secondary during the first quarter. Newhouse carried the ball 14 times for 69 yards and one score. He also had five receptions for 58 yards. 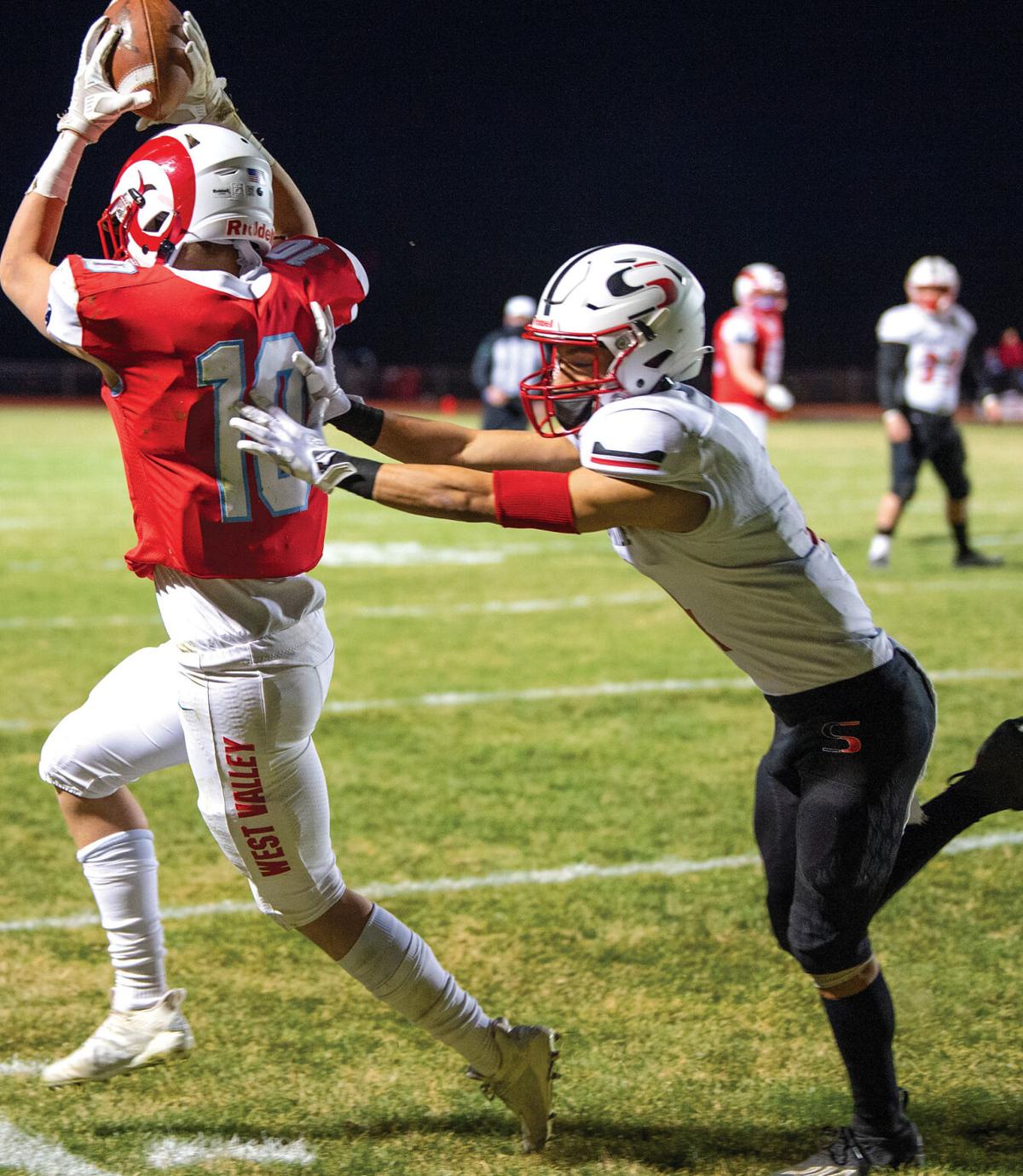 SHS junior defensive back Cesar Silva-Alvarez pushes WVHS senior wide receiver Caleb Woodcock after he makes the reception at the Grizzlies’ 12-yard with 11-seconds remaining in the second quarter. The Rams led 20-7 at halftime. 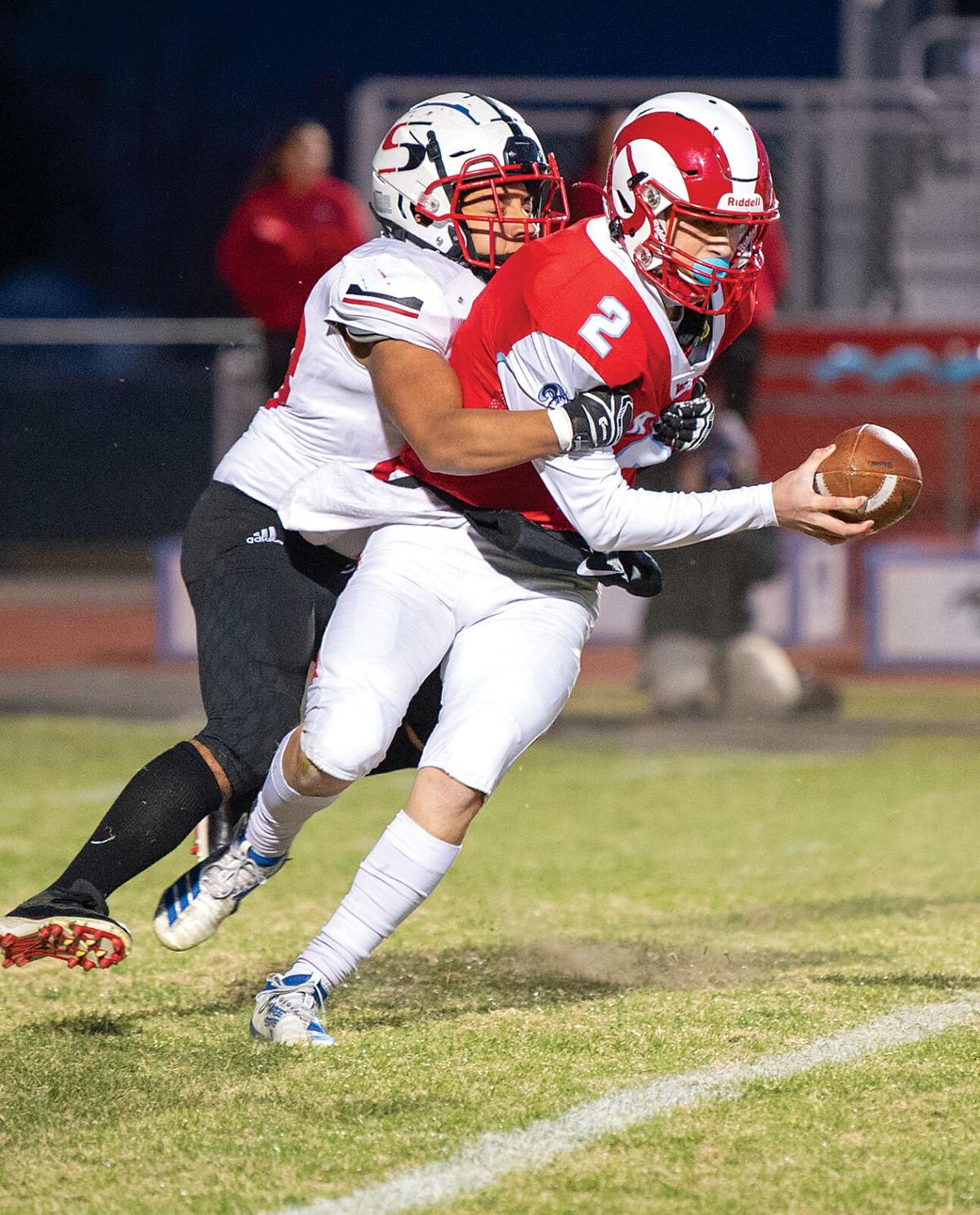 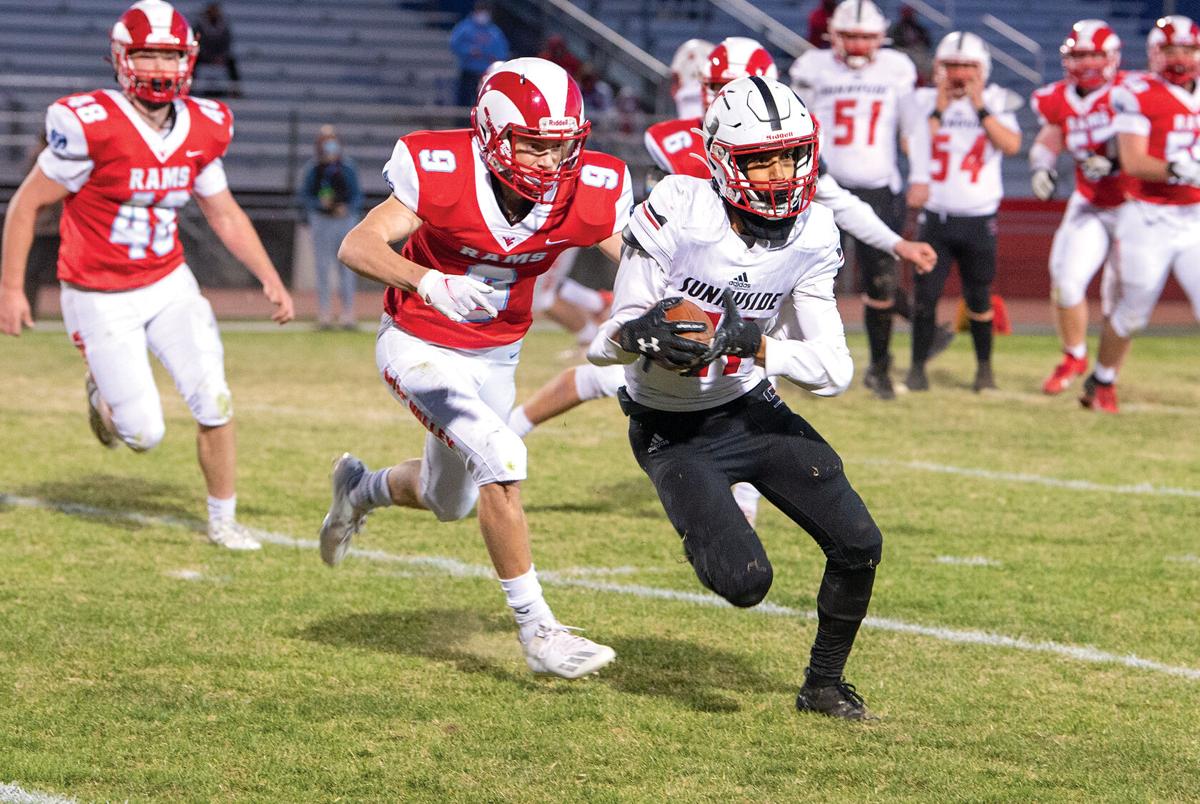 SHS sophomore wide receiver Brent Maldonado hauls in the pass over the middle with WVHS junior defensive back Ben Trammell in pursuit. Maldonado made 15 receptions for 88 yards and one touchdown. 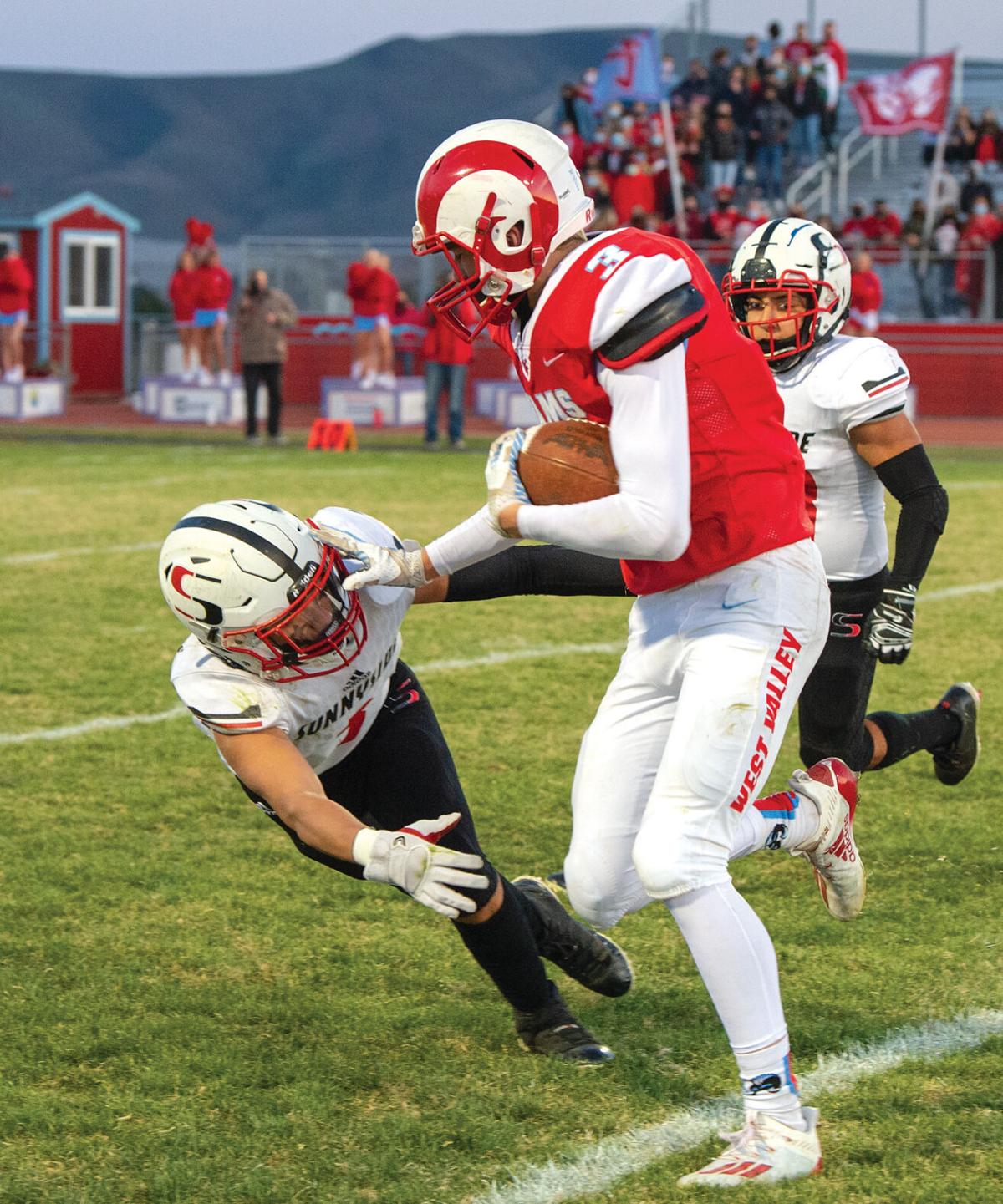 SHS junior running back Myles Newhouse powers his way into the Rams’ secondary during the first quarter. Newhouse carried the ball 14 times for 69 yards and one score. He also had five receptions for 58 yards.

SHS junior defensive back Cesar Silva-Alvarez pushes WVHS senior wide receiver Caleb Woodcock after he makes the reception at the Grizzlies’ 12-yard with 11-seconds remaining in the second quarter. The Rams led 20-7 at halftime.

SHS sophomore wide receiver Brent Maldonado hauls in the pass over the middle with WVHS junior defensive back Ben Trammell in pursuit. Maldonado made 15 receptions for 88 yards and one touchdown.

The Sunnyside Sun has reached out to SHS Head Football Coach John Lobbestael for comment.

Frustrations about the concern for his player’s safety became visibly apparent on the sideline as SHS Head Football Coach John Lobbestael emphatically voiced his disgruntlement to officials during the fourth quarter of the Grizzlies’ Friday night rematch against West Valley.

Beyond the barrage of offensive holding and illegal procedure penalties that were called against Sunnyside throughout the game, the line of contention regarding the lack of illegal contact flags thrown to protect Grizzly players had been crossed.

The Rams special teams play returned a short punt from around the Grizzly’s 25-yard line for a touchdown to make the score 34-13 with 3:35 left in the game. Before West Valley was set to kickoff, Lobbestael encroached a step into the restricted zone on the sideline and was instantly flagged for his second unsportsmanlike penalty.

A few words of disbelief were communicated and the referee informed coach to leave the field immediately. He removed his headset and complied. Assistant coach Ryan Cullen took over his duties. As a result of his ejection, Lobbestael will miss the Grizzlies’ final home game of the season against Davis, 7 p.m., Friday, April 2.

Once the game ended, Sunnyside coaches led players quickly off the field to ensure there were no further interactions with opposing players or spectators, while the Rams held their post-game team meeting at the opposite end of the field.

The level of aggravation for the physical play that was being allowed to take place earlier in the final quarter by officials seemed to rise among the Grizzlies’ coaching staff and their dismay was becoming increasingly visible.

Following a West Valley touchdown, which increased the Rams’ lead to 27-13 with 8:55 left in the game, Sunnyside’s offense began the possession from their 20-yard line.

On the second down play, junior quarterback Logan Rodriguez connected with sophomore wide receiver Brent Maldonado running an inside slant pass route. As Maldonado caught the ball, the Rams’ defensive back launched toward him and leading with his helmet, struck the defenseless player above his shoulders with an impact that was heard across the field.

The violent helmet hit forced Maldonado’s knees to buckle as he was driven to ground. The referee immediately threw a flag on the play for the illegal helmet blow, which resulted in a 15-yard penalty.

As the infraction was marked off, a booming yell of “that was a good football play” was heard loud and clear from West Valley’s home field side. The shortfall of penalties for illegal contact: such as horse-collar tackles and players being thrown to the turf after their forward progress had been stopped, may have contributed to the escalating physicality and at times, illegal contact.

The Grizzlies were flagged for offensive holding with about 4:47 remaining in the game. On the subsequent play from their own 33-yard line, Rodriguez was forced to run out of the pocket and down the right side of the field for a short gain where West Valley defenders gang tackled and drove him to the ground.

Lobbestael voiced his displeasure to the referee about the tackle and his non call for a personal foul. That’s when the official called the first unsportsmanlike penalty on him and set in motion the events which led to the Rams’ final TD and his ejection.

West Valley scored the game’s first TD on a one-yard plunge at 7:32 in the first quarter. They would also add another goal line rushing score to take a 14-0 lead with 3:05 remaining.

Sunnyside junior running back Myles Newhouse ran nine yards around the left side for the team’s first TD and following the successful extra point, the Grizzlies trailed 14-7 with 2:16 before halftime.

Newhouse carried the ball 14 times for 69 yards and one score. He also had five receptions for 58 yards. The all-purpose back had a couple of big rushing and receiving plays wiped out due to holding penalties in the first half.

On the ensuing kickoff, West Valley fielded the ball around their 20-yard line and returned it for a TD. The PAT was missed, and the Rams were up 20-7 in 18-seconds time.

Both teams had an offensive possession but were unable to put up any points on the scoreboard. The Rams missed a 26-yard field goal as the first half expired.

Junior defensive back and wide receiver Chase Yanez recovered a fumble at the Rams’ 23-yard line within the first minute of the third quarter. The Grizzlies converted the turnover into six points when Rodriguez found Maldonado for a nine-yard TD.

Because of two penalties committed by the kicking team on the PAT attempt, the offense went for the two-point conversion from the 14-yard line but were unsuccessful. Sunnyside cut the deficit to 20-13 with 8:54 remaining in the quarter.

Rodriguez completed 29 of 45 passing attempts for 248 yards, one TD and one interception. Maldonado made 15 receptions for 88 yards and one score. Yanez caught six passes for 46 yards.

Sunnyside’s defense took over in the third quarter and shut down the Rams offense. The Grizzly offense would not be able to sustain another second half scoring drive. Penalties and special teams play proved to be contributing factors and too much for the visiting team to overcome.

The multitude of offensive holding penalties had not been a determining factor in their earlier meeting, a 48-30 win on March 5 at Clem Senn Field.