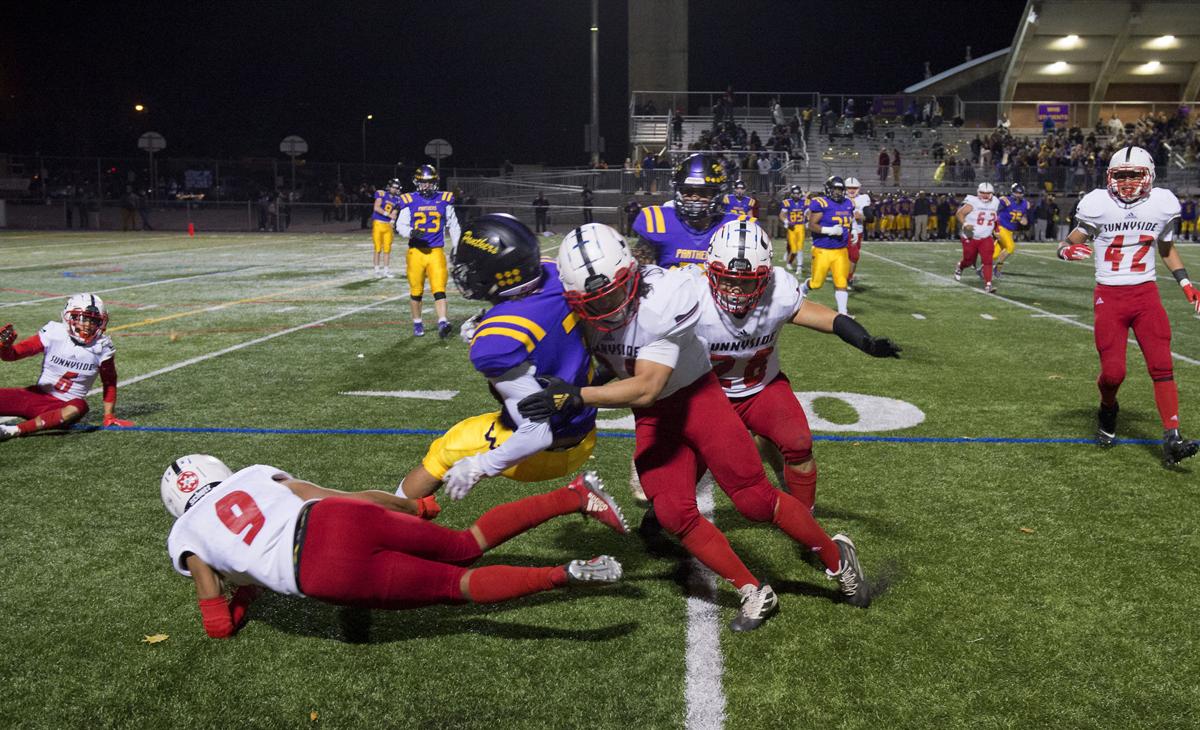 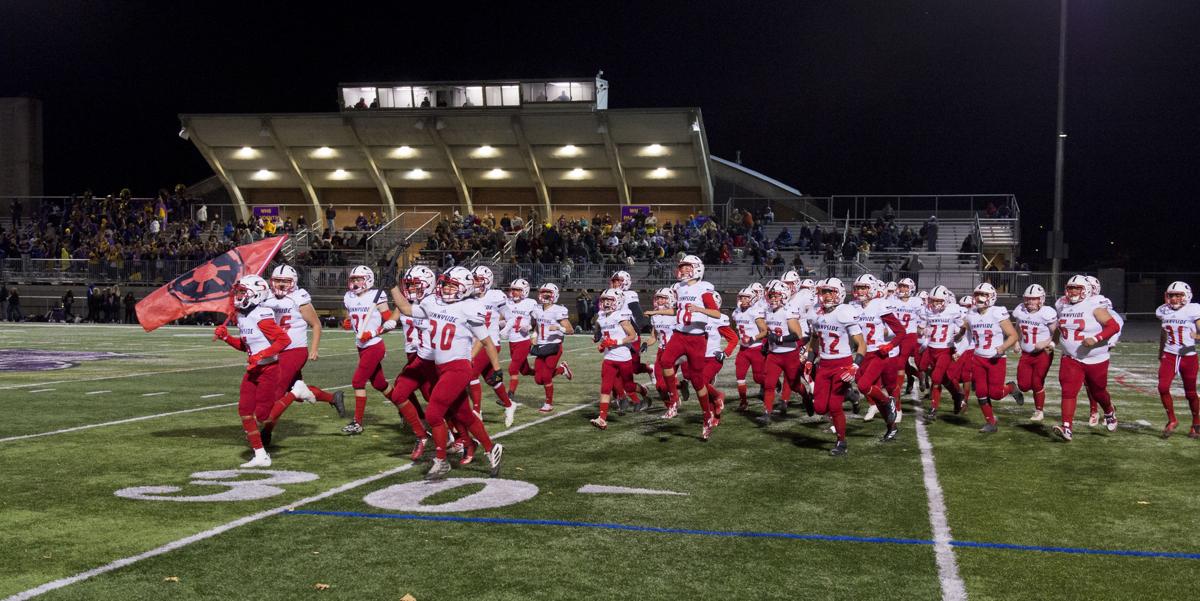 PRIME TIME ENTRANCE — The Sunnyside Grizzlies run out onto the Apple Bowl stadium prior to the opening kickoff of their Big 9 game against Wenatchee on Friday, Oct. 25. 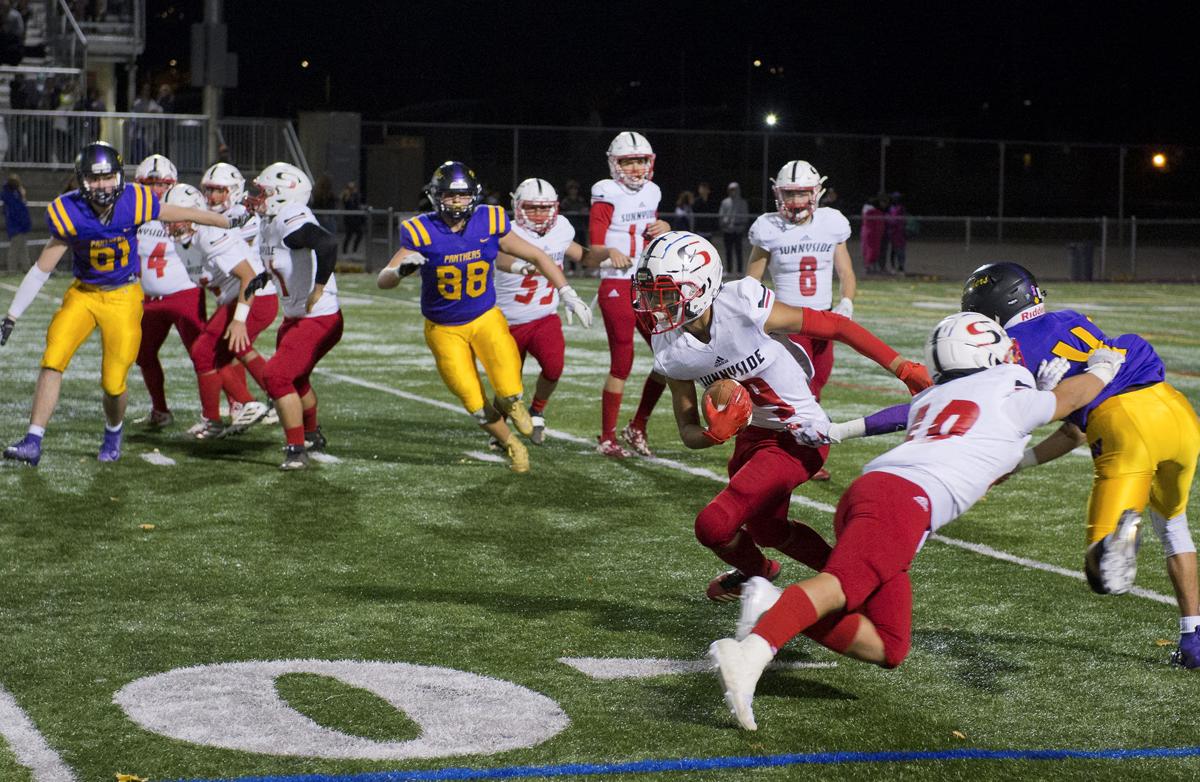 CATCH AND RUN — SHS senior wide receiver Jonathan Sanchez takes the quick pass from sophomore Logan Rodriguez and cuts it up field, along the Grizzlies’ sideline for a big first quarter gain. Sanchez had three receptions for 43 yards. 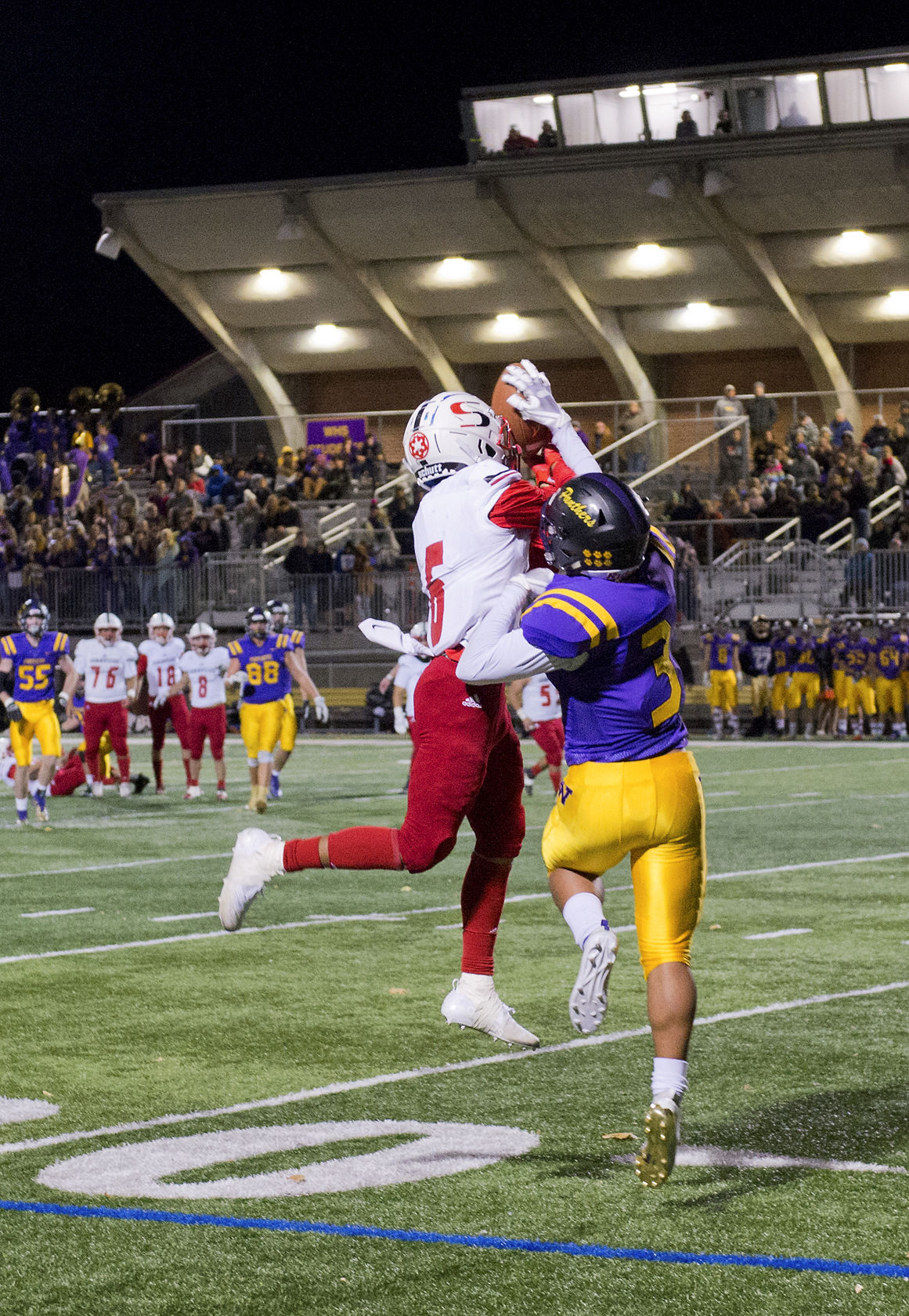 PRIME TIME ENTRANCE — The Sunnyside Grizzlies run out onto the Apple Bowl stadium prior to the opening kickoff of their Big 9 game against Wenatchee on Friday, Oct. 25.

CATCH AND RUN — SHS senior wide receiver Jonathan Sanchez takes the quick pass from sophomore Logan Rodriguez and cuts it up field, along the Grizzlies’ sideline for a big first quarter gain. Sanchez had three receptions for 43 yards.

“They’ve (Wenatchee) given us an opportunity to get mad at ourselves. Refocus. Win our last two games. Root for them week 10 and still go to state,” stated Sunnyside Head Coach John Lobbestael as he challenged his players following the game. “We need to finish strong and go 7-3!”

After a scoreless opening quarter, the Panthers’ offense began the second quarter from their own 26-yard line. They went on an 11 play, 5:11 drive with senior running back Nathan Blauman powering his way up the gut of the Grizzlies’ defense for a four-yard touchdown. The point after touchdown was good and Wenatchee led 7-0 with 6:49 remaining.

Sunnyside started the ensuing offensive series at their own 17-yard line. Following a first down, the Grizzlies were in their no huddle offense and found a rhythm against the aggressive and hard-hitting Panthers’ defense.

Sophomore quarterback Logan Rodriguez, who completed 15 of 23 passes for 140 yards and was sacked eight times for negative 43 yards, hooked up with senior wide receiver Mike Rivera along the sideline for a big pass play to the Wenatchee 40-yard line.

Sunnyside’s drive sputtered on a fourth down and 13 at the 27-yard line. The Grizzlies’ offense was held to 201 total yards.

The Panthers were awarded the ball back on downs with 2:46 left before half. 1:40 later, junior quarterback Camden Sirmon connected with sophomore Johnathan Amezcua on a 23-yard touchdown pass. The extra point was good, and the Panthers went into the locker room ahead 14-0.

4:36 into the third quarter, WHS special teams returned a punt for an 80-yard score. The offense added another touchdown on a 50-yard run with 1:56 remaining to give the Panthers a commanding lead.

“Now, we’ll get ready for our upcoming games. Play hard and finish the season. And, we’ll see what happens,” senior running back Arturo Fernandez acknowledged after gaining 67 yards on 22 carries while catching two passes for nine yards. We’ll go hard in practice, get our focus back and be strong on the ball.”

The Grizzlies are presently tied with second place Eastmont at 3-1. They hold the tie breaker edge over the wildcats after winning 29-28 at Clem Senn Field on Oct. 18.

Sunnyside has two conference games remaining and each one had significant playoff implications.

The Grizzlies will need to win their upcoming conference games against Davis and Moses Lake. And, coupled with a Wenatchee win at Eastmont on Thursday, Nov. 7, they would receive the second state bid.