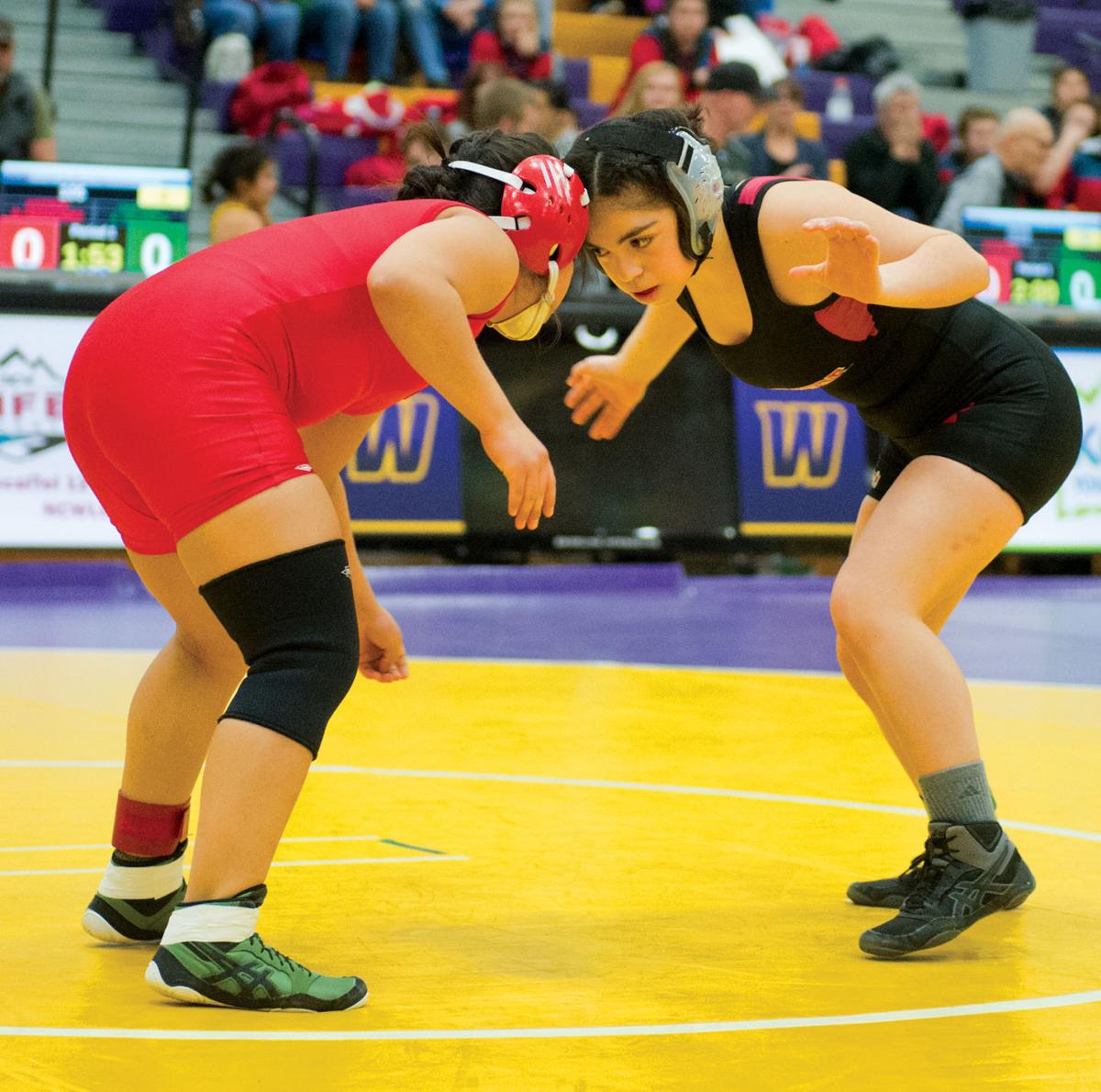 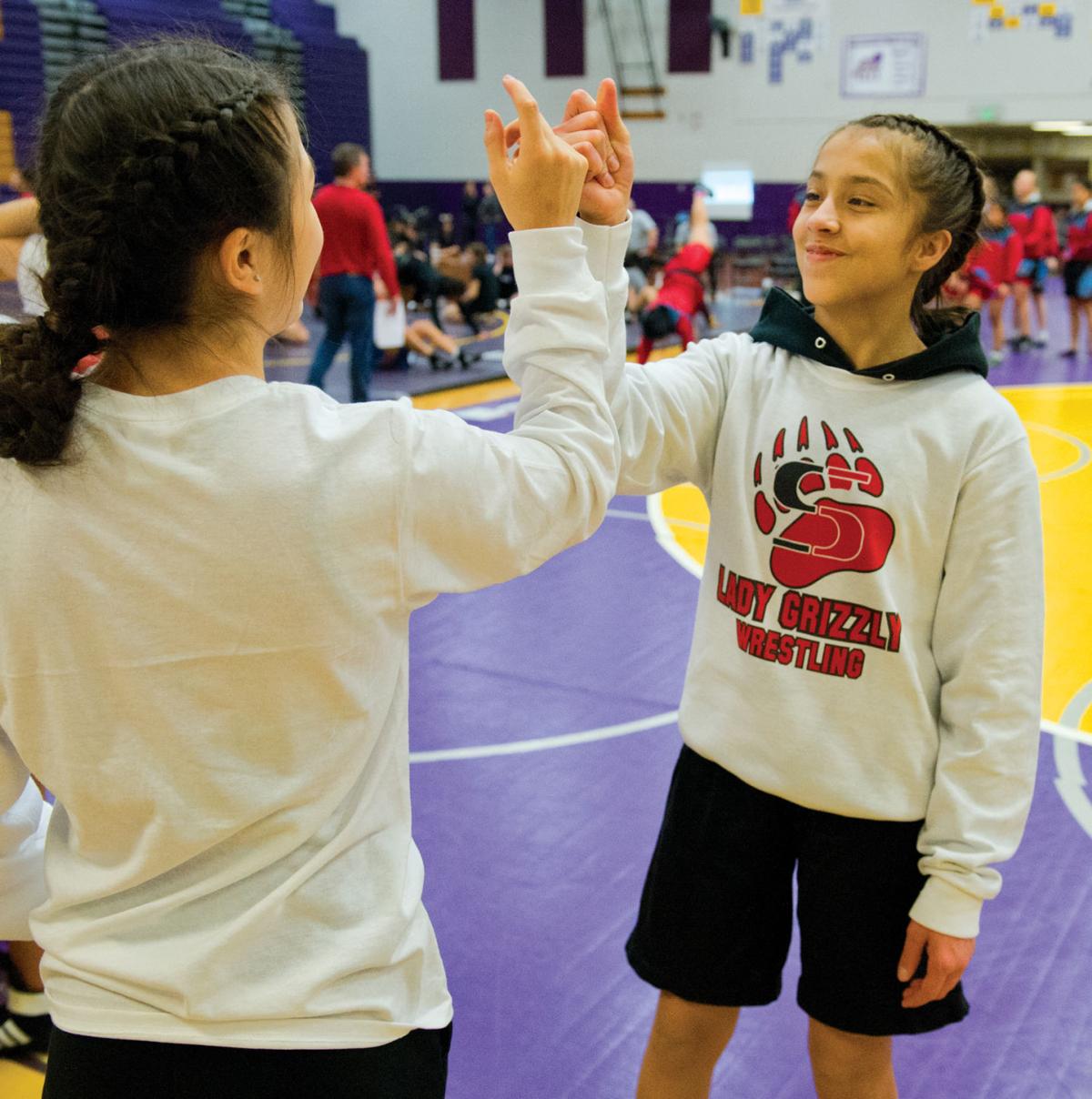 WENATCHEE — The Grizzly girls wrestling squad captured their third 2020 NCWAA District 6 Championship title in a row with a dominating 140-point margin of victory while exemplifying their will to win drive on Saturday, Feb. 8.

“There’s always some teams with special athletes and we just wanted to match up well with those ones,” coach Dave Mendoza conveyed as he commended all 18 SHS team members for their competitive resolve and challenging themselves to be their best. “Everything seemed to work out pretty well for us!”

There were 22 girls signed up to participate in the tournament but four were injured and could not compete. Freshman Adelina Valencia (11-9) started the team off on the right track Friday evening with a first-round win by fall over Eastmont junior Daniela Hernandez (9-12) at 2:57.

With her teammates standing alongside the mat and enthusiastically cheering her on, Valencia revealed how her opening round, post season highlight was unlike any wrestling match she had experienced before.

“It feels amazing! I was a little bit nervous. All my coaches like want me to be nervous, it builds my confidence,” the 105-pound wrestler exclaimed after receiving a high-five and hug from her mom in the stands.

Nine athletes made the finals with five being crowned district champions. Sophomore Evelin Salazar, who stepped onto the mat for the very first-time last season is now a champion in the 145-pound weight class.

“We knew last year when she would step onto the mat and shooting takedowns, never doing it before, we were saying, ‘Oh my goodness! This kid has got something,’” coach recalled when describing how Salazar’s summer weightlifting routine and leg squats empowered her athletic ambitions to succeed.

Freshman Alexxus Ramos and junior Roxsana Cisneros, both wrestling in the 110 division, met up in the finals and secured their regional spots. However, only the winner would be district champ.

“I didn’t want to wrestle my teammate, but I had to. She was in my weight class,” Ramos acknowledged. “When you’re on the mat, you’re focused on one thing and that one thing is winning.”

She defeated Cisneros by major decision, winning 13-0 for her first district championship and higher regional seeding. They share a bond of mutual respect while competing in the practice together.

“Even though she’s my teammate, I still have to go out there and give it my all,” Cisneros stated. “I’m not going to just give it up. No matter what happened, I knew I was like going to be okay with it because she’s my teammate and I do love everyone on the team.”

Mendoza said his team could be 0-30 and never win anything and he would still have the best job in the world.

“I’m just tickled to death to be a part of their experience. And hopefully, they enjoy it and look back and say, maybe it wasn’t all about wrestling,” coach expressed. “Maybe it was all about the other lessons we’re learning as we go through this journey.”

A total of 13 wrestlers which includes one alternate will be advancing to the WIAA Region IV Girls’ Wrestling Championships at Othello High School beginning on Friday, Feb. 14, 5 p.m., and Saturday, 10 a.m.

“We’ll probably have one of the bigger teams but obviously, there’s some really, really good wrestlers out there. So, the girls are going to have to really battle this weekend,” Mendoza declared.