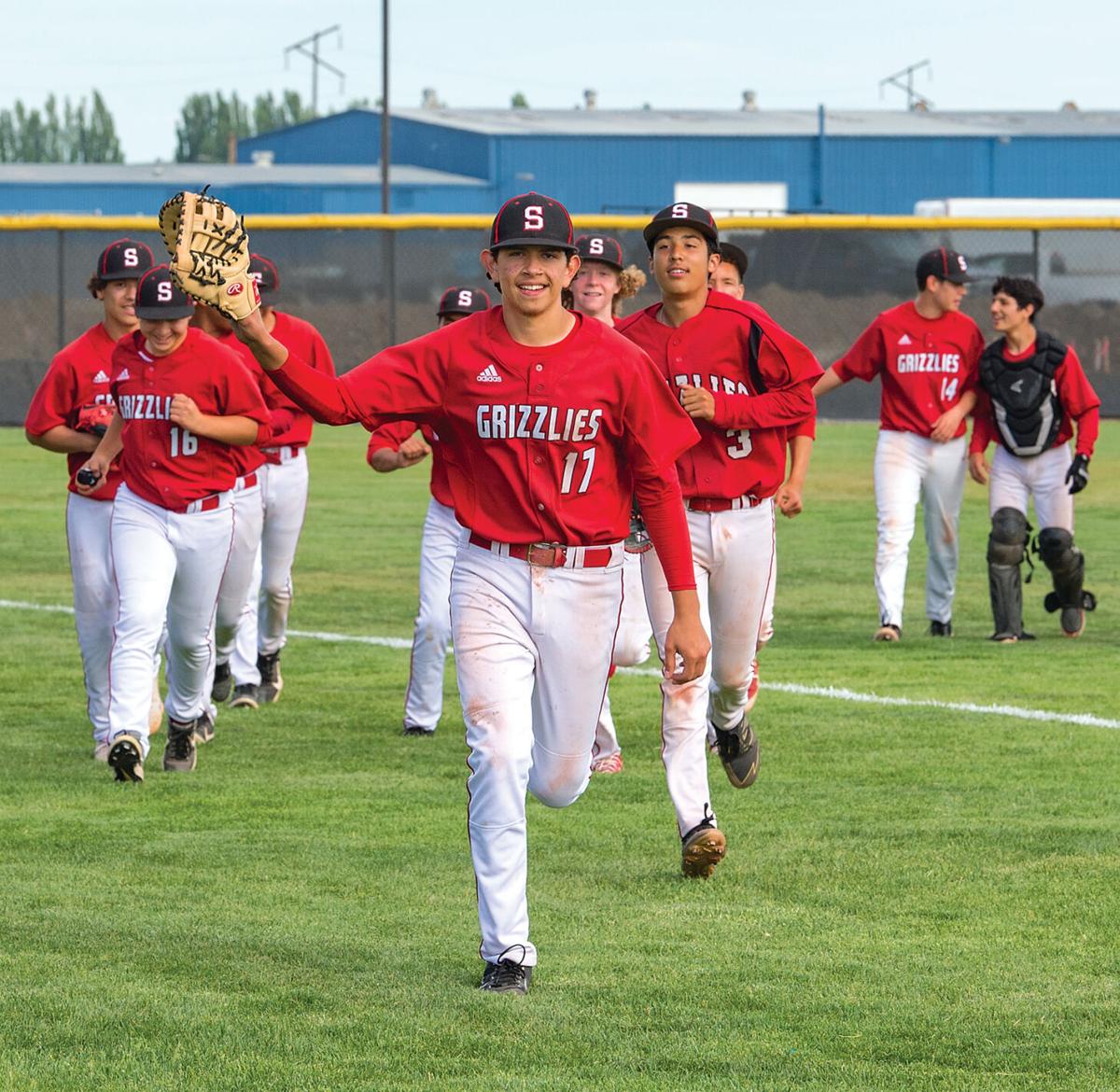 Sunnyside High School senior first baseman Eddy Almaguer leads the exuberant Grizzlies’ baseball club back to the dugout after Head Coach Pete Marquez told the team to enjoy their first win of the season, a 6-2 victory over the Davis Pirates. 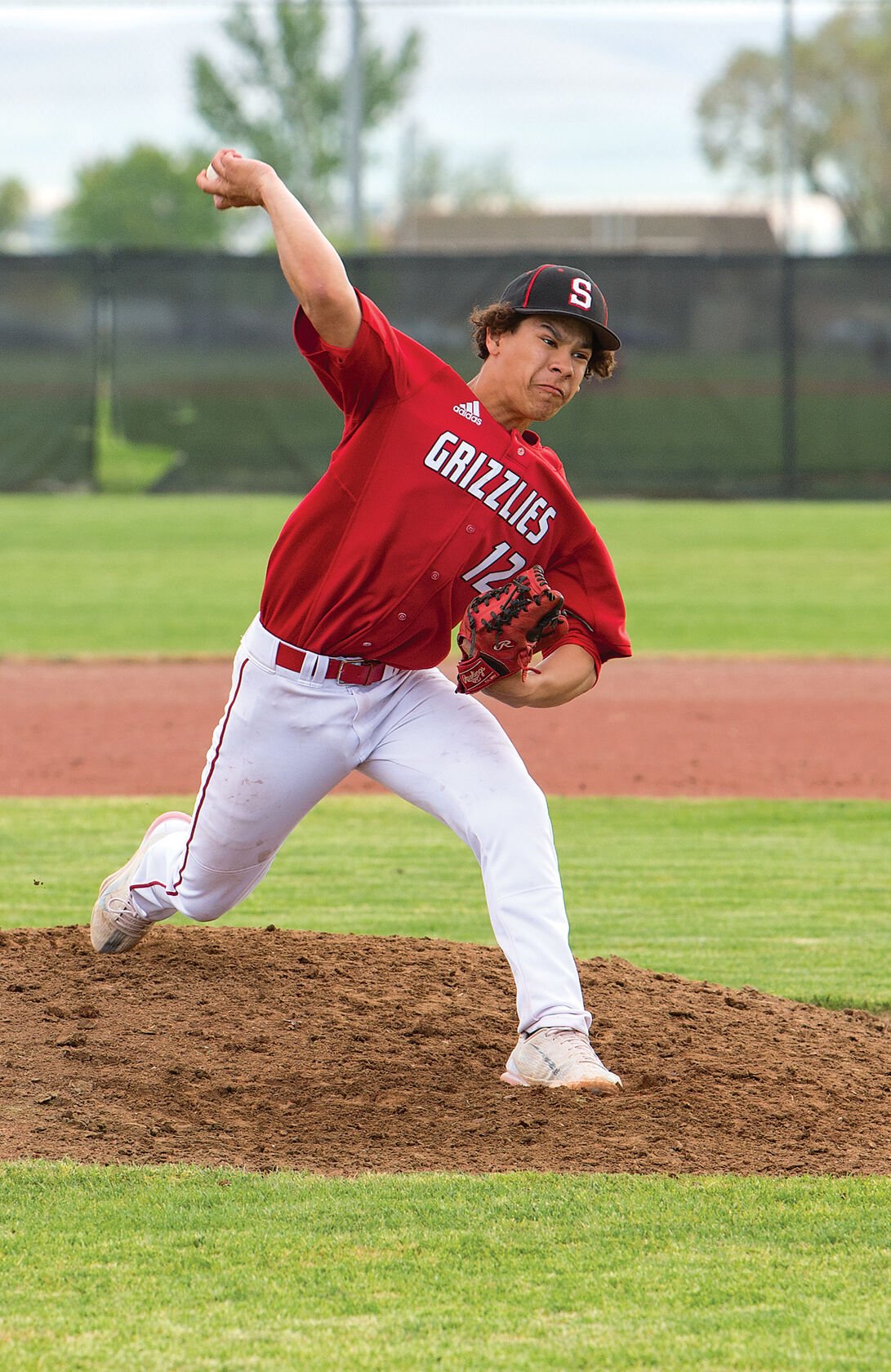 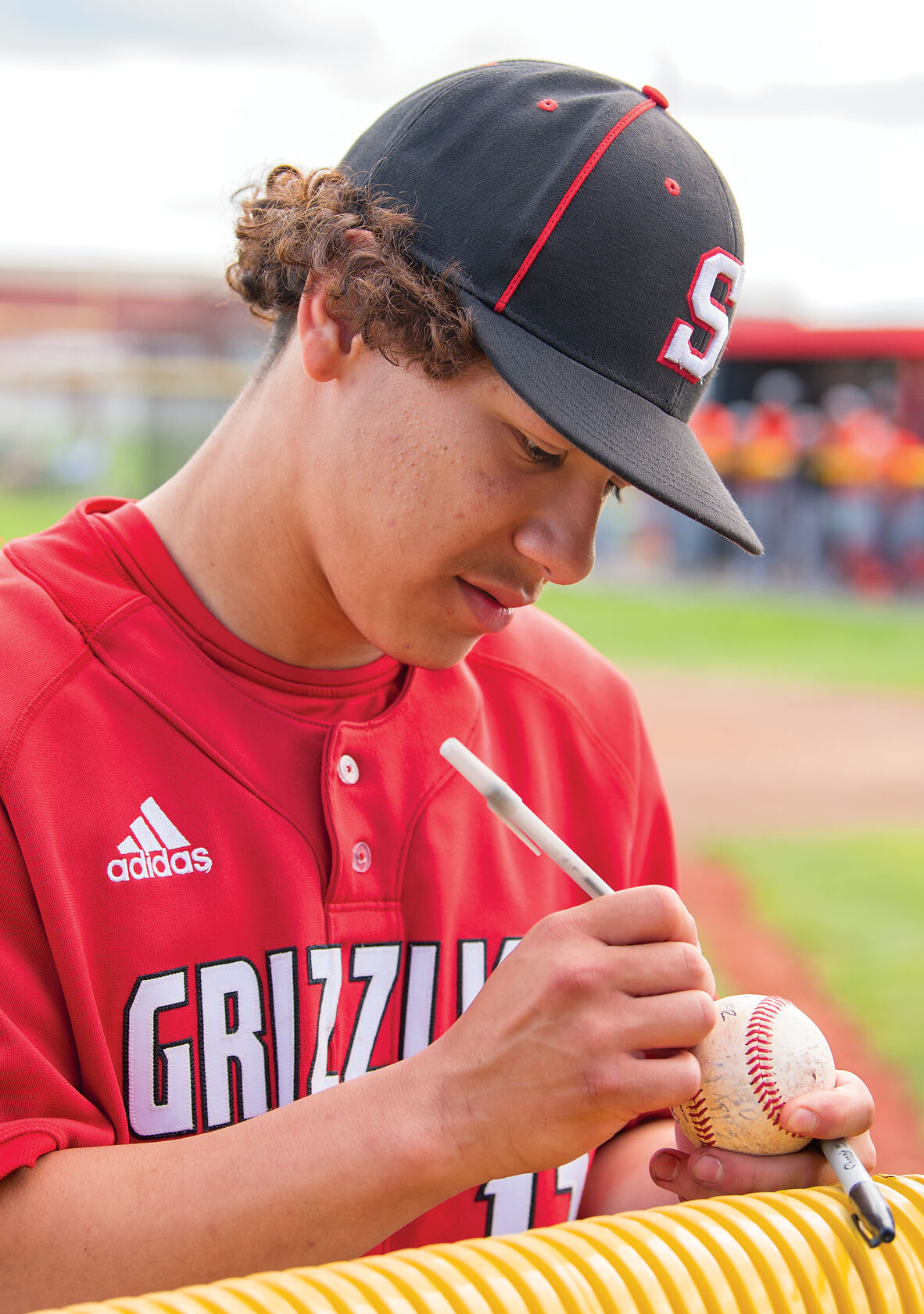 Sunnyside High School senior pitcher Elijah Lopez autographs a baseball after the righthander went the distance for the Grizzlies, who earned their first victory of the season in convincing style. 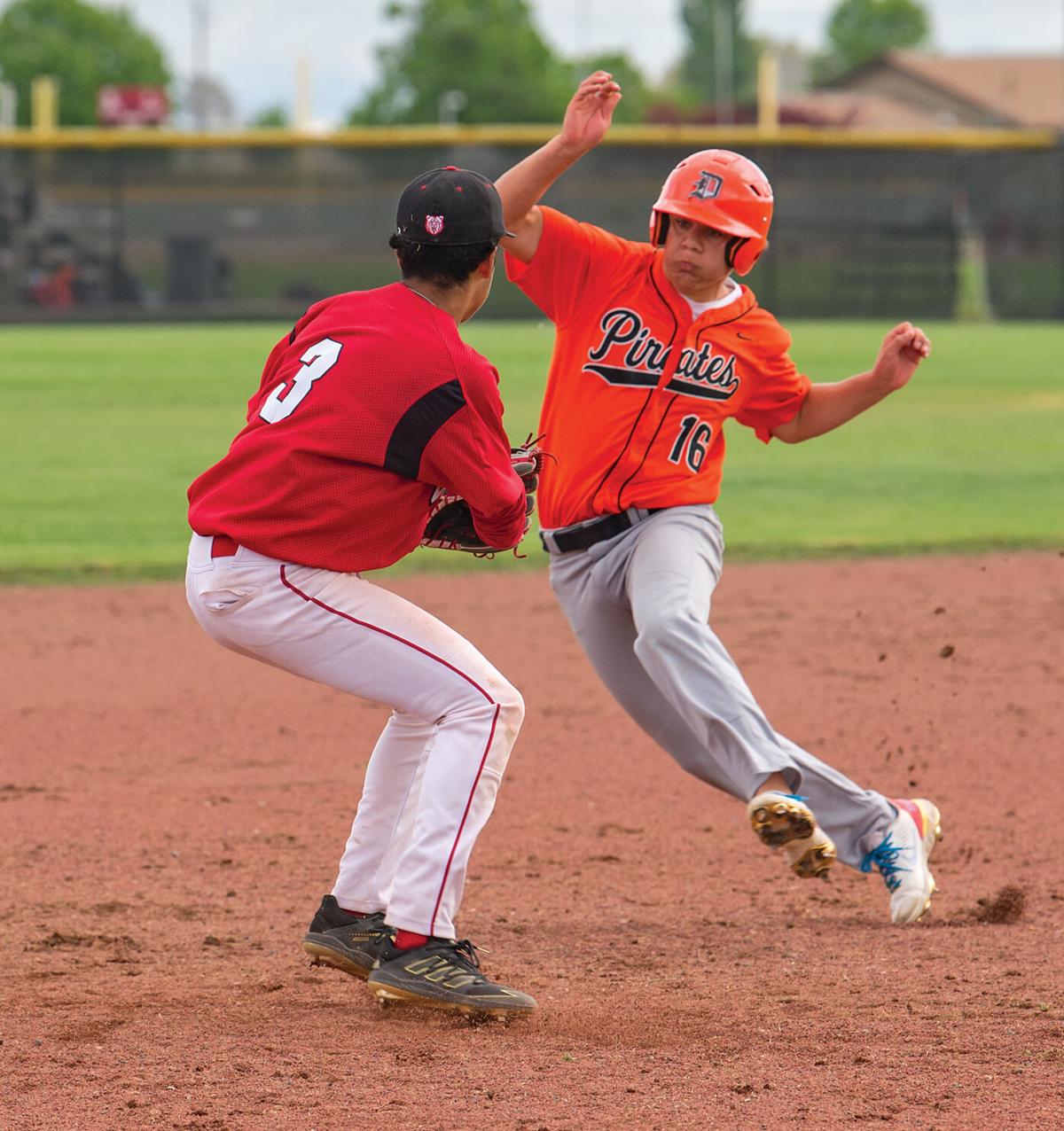 Sunnyside High School freshman and third baseman J’den Briones with the ball in his right hand inside the glove, applies the hard tag on the Pirate baserunner for the first out in the top of the fourth inning with Grizzlies out in front 5-1. 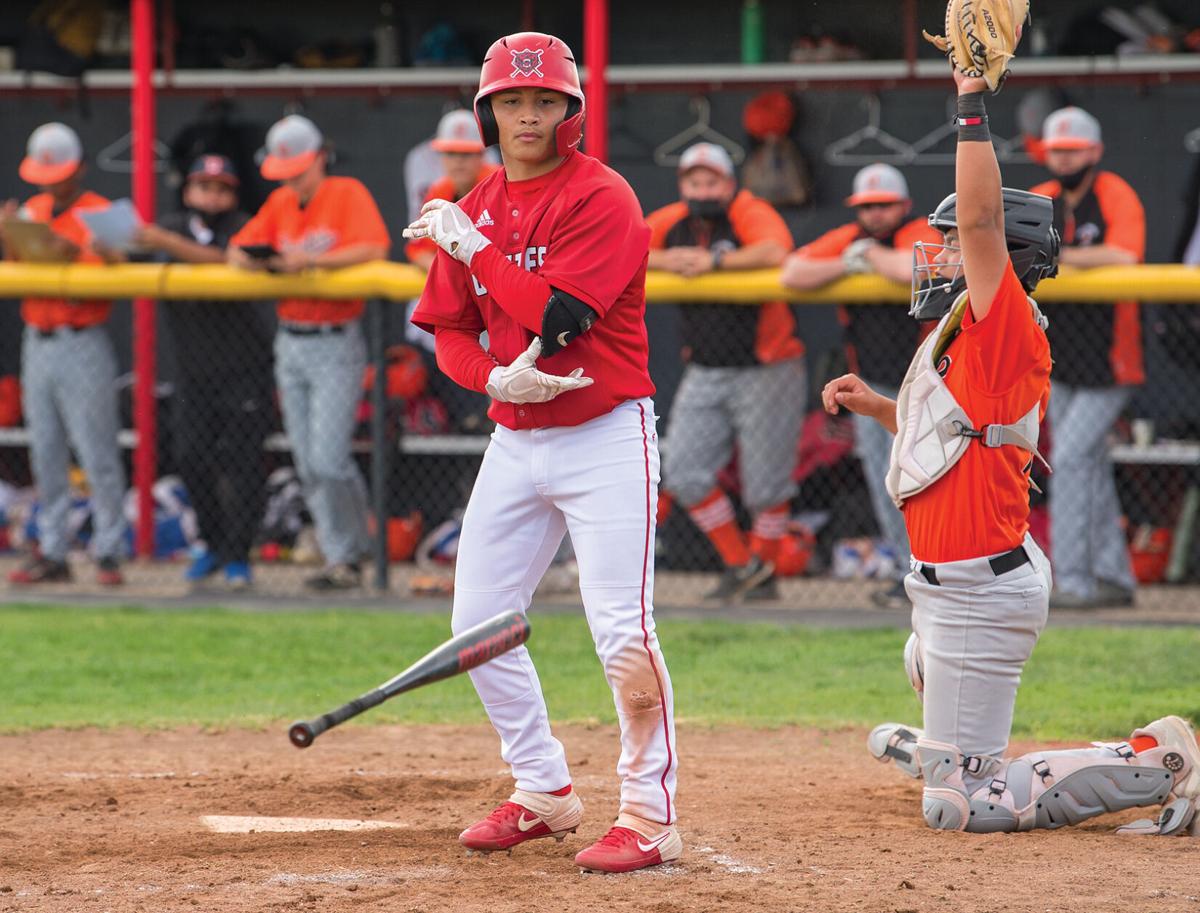 Sunnyside High School junior centerfielder Ruben Navarro draws a two out walk in the bottom of the fifth inning, prior to the Grizzlies adding an insurance run to increase the lead 6-1.

Sunnyside High School senior first baseman Eddy Almaguer leads the exuberant Grizzlies’ baseball club back to the dugout after Head Coach Pete Marquez told the team to enjoy their first win of the season, a 6-2 victory over the Davis Pirates.

Sunnyside High School senior pitcher Elijah Lopez autographs a baseball after the righthander went the distance for the Grizzlies, who earned their first victory of the season in convincing style.

Sunnyside High School freshman and third baseman J’den Briones with the ball in his right hand inside the glove, applies the hard tag on the Pirate baserunner for the first out in the top of the fourth inning with Grizzlies out in front 5-1.

Sunnyside High School junior centerfielder Ruben Navarro draws a two out walk in the bottom of the fifth inning, prior to the Grizzlies adding an insurance run to increase the lead 6-1.

Dominating pitching and timely hitting, combined with rock solid defense led by Sunnyside’s two upperclassman Elijah Lopez and Eddy Almaguer to the squad’s first win in three regular seasons with a 6-2 victory during the first of a home doubleheader against Davis on senior day.

“It’s been a long time coming. We’ve gotten better and didn’t make so many mistakes, and that’s what happens when you don’t make mistakes,” SHS Head Baseball Coach Pete Marquez said in the dugout following the team’s first victory since sweeping Eisenhower in a doubleheader on April 8, 2017.

SHS senior and starting pitcher Elijah Lopez went the distance and made his final home game appearance for the Grizzlies, who improved their overall record to 1-6 and 1-4 in the CBBN.

The righthander took command of the Pirate lineup while throwing his curveball over the plate for strikes. He credited the team’s defense and recognized his outfielders’ ability to track down and make the sure handed flyball outs.

“It feels good to get our first win. Our defense played their best today and made the plays when we needed them the most,” Lopez stated.

“Elijah was fantastic! He threw strikes all over the plate and forced them to swing the bat. Made the game go much quicker and it was a much easier game to play,” coach reported.

The ball was in play and the Grizzlies’ defense would bear down with confidence and make plays without committing errors that have adversely affected the outcome during the past couple of seasons, Marquez pointed out.

Junior second baseman Jacob Martinez and centerfielder Ruben Navarro were aggressively solid up the middle on defense. The speedy duo made over the shoulder catches look routine.

Navarro was able to play a shallow centerfield and used his speed to run down and shag the fly balls in stride. After making the catch, he stopped on a dime and in one fluid motion, pivoted his lower torso and showcased his canon like arm on a number of big time throws from the outfield to either bag at the corners.

“He’s something to watch. I keep thinking the ball is going to get over his head and he manages to shake it out,” the clubhouse skipper conveyed.

His eye-catching talents prevented base runners from advancing and applying any added pressure on the defense.

The captain of the outfield said he started playing baseball in sixth grade and was appointed to the position immediately.

“Playing centerfield makes me standout more because I’ve got the arm and the speed. I let my game out on the field talk for myself,” Navarro explained.

There were a lot of fly balls hit for long outs as the Grizzlies’ winning pitcher was able to accurately lock in on Yanez ’s home plate target from the start and finding his throwing rhythm.

When the ball was pulled to the left side, junior outfielder JJ Montelongo, freshman third baseman J’den Briones and junior shortstop Logan Rodriguez were there to provide fielding stability. Freshman right fielder Diego Arteaga and first baseman Almaguer held down the opposite side.

In the bottom of the second, Sunnyside was able to manufacture four runs on walks and fielding errors issued by the Pirates, and a two-run single by Almaguer which proved to be the game winning hit.

“Just being able to contribute to my team and do whatever it takes to win, feels great,” Almaguer acknowledged, who was excited to share the memorable moment with family members in attendance during their final home game of the season.

Prior to their second game and following a brief ceremony honoring the two SHS seniors, the first baseman said they were trying to keep it cool and planned to use the winning momentum from here on out.

The number three hitter said he and Lopez had never experienced a varsity win in his four years until today. The thought of quitting never entered his mindset.

“If you just keep working to get better every day, it will eventually come together, as you see today!”

The Grizzlies added another run in the third inning on a two out hit by Briones, who beat out the third base throw as freshman baserunner Noah McNair scored on the play.

The Pirates scored their first run in the in the fourth on a single, stolen base and double with no outs. They were on the verge of pushing across more runs, but the Grizzlies’ defense took charge.

Briones tags out the baserunner at third for the first out. Lopez makes one of his over the shoulder catches for the second out. Rodriguez takes charge of a ground ball in the hole at short and fired a strike to Almaguer, who stretched out to make the catch and end the inning.

Once the Grizzlies ran off the field and entered the dugout, Rodriguez called the squad together and reminded them, “to focus up and keep playing the way we’ve been!”

In their half of the fifth with two outs, Briones walks. With Navarro in the batter’s box, the leadoff hitter proceeded to steal second and third. Navarro dug in and battled the second Pirate pitcher, who entered the game to start the bottom of the fourth.

He shortened his swing and forced the pitcher to hurl a throw into the dirt that rolled to the backstop as Briones scored easily to make it a five-run lead.

Lopez took a 6-1 lead into the sixth and after a hit batter, which the two officials did not see initially until the Pirate batter pleaded his case and proceeded to lift up his pant leg and show off the welt. The home plate umpire awarded him first and the bases were loaded without an out.

Martinez ran down a flair hit into shallow right field for the first out. The next batter singled home a run to trim the Grizzly lead to 6-2.

The second baseman caught a line drive in the hole shaded toward first base at the edge of the infield for the second out. The bases were still loaded when Martinez charged a grounder and fielded the ball cleanly and tossed to Almaguer at first to end the Pirates’ threat once and for all.

It’s been a real good day. I told the team to enjoy the win when you get a win.