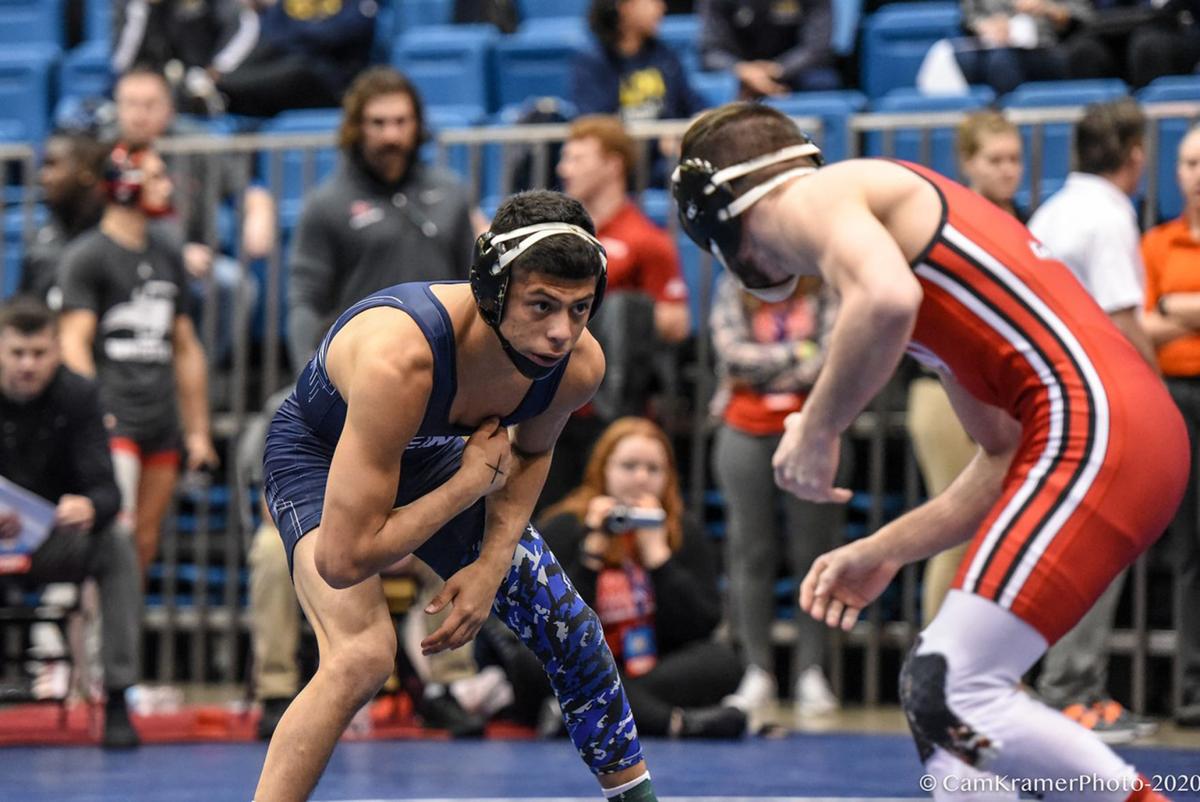 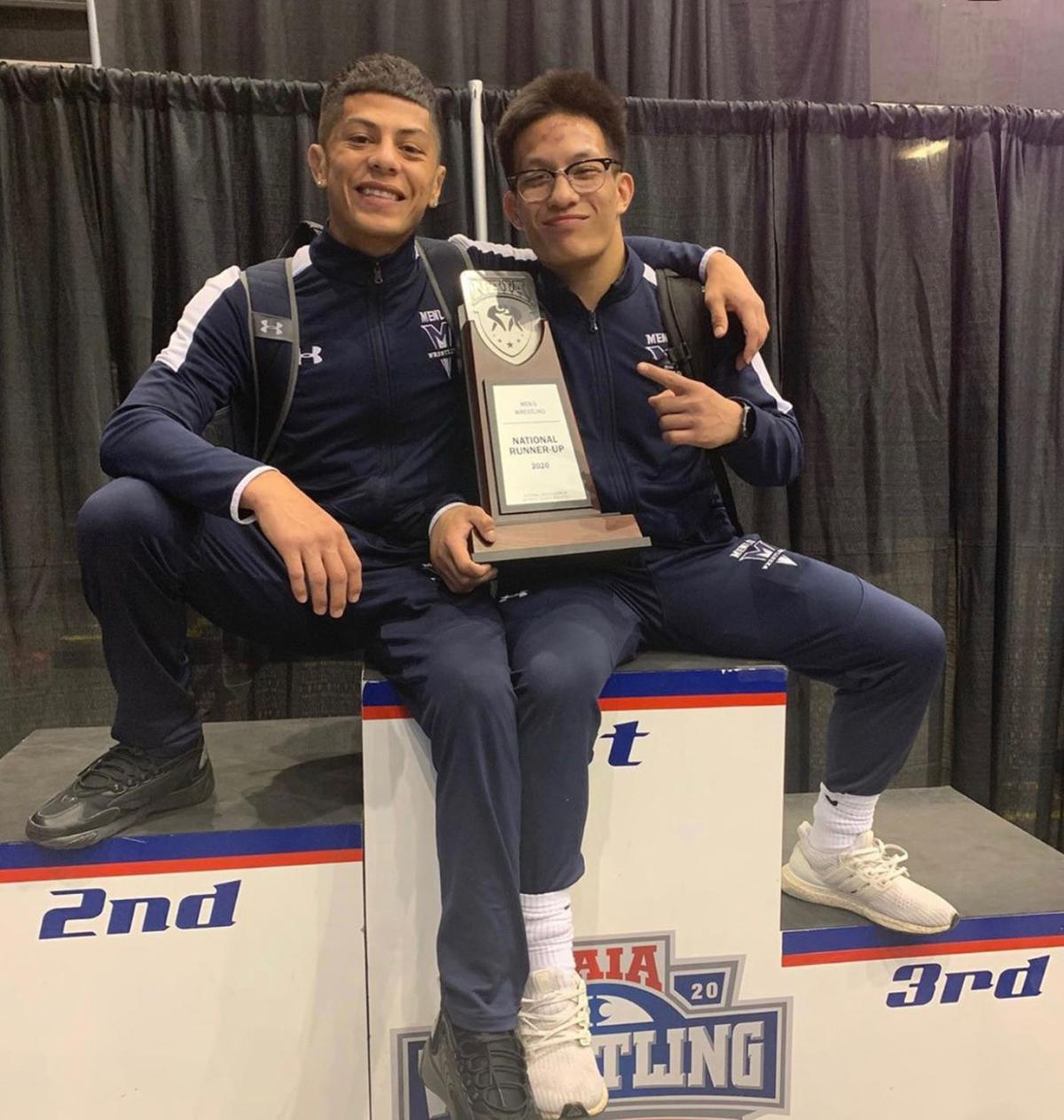 ATHERTON, Calif. — “The thing I like about wrestling is that you have a goal and work all season for it. You put everything you have into it – sometimes you come up short, sometimes you achieve the goal and it kind of teaches you lessons along the way – builds character,” All-American and Menlo College sophomore Jacob Mendoza conveyed following his fourth place ranking at the NAIA National Wrestling Championships.

The 125-pound wrestler helped the Oaks’ men’s team earn a second-place win, their highest finish in 16 years when they were national runners-up in 2004, and Mendoza ended his (21-12) season with a No. 4 nationally ranking following the 63rd annual Tournament in Park City, Kansas at Hartman Arena on March 6-7.

“I felt like just being on the team that I’m on – it’s such a high level program and surrounded by great athletes – has made me believe in myself, even though I wasn’t showing it earlier in the year,” he acknowledged. “I ended up peaking at the right time and having a great national tournament. So, that was the ride I took. I just had to keep believing. My coaches believed in me and my teammates as well, which was great!”

As a former 2016 Sunnyside High School state champ and Grizzly alumni, Mendoza said the grueling six-month Cascade Collegiate Conference season felt like a long roller coaster ride. “I was actually the third string 125 pounder,” he candidly disclosed while describing how his competitive character would be tested.

What he didn’t divulge was the tumultuous ride also encompassed descending physical struggles with knee and shoulder injuries, a torn meniscus and labral tear, his dad Dave Mendoza confirmed.

“This kid is always amazing when it comes to things like that. He just has it in him and he’s going to go out there and just battle,” Mendoza said. “I as a [SHS girls wrestling] coach take a lot of my philosophy from just watching him, seeing his training regimen and observing his inner strength which I try to pass on to the girls.”

The first year Oaks wrestler opted out of having any surgeries, he consulted with orthopedic doctors and the training staff to develop a plan for managing the pain while continuing to compete on a team which would include two national champions and five All-Americans. For the first time in the school’s history, the Oaks went undefeated (9-0) along with defeating San Francisco State.

“I train and practice every day. I lift three times per week, and I do an extra work out every day to keep my weight in check. So, pretty much I get three workouts in a day just to keep myself in shape,” Mendoza explained, who normally tips the scale at 145.

About a week before the national qualifying tournament, Menlo men’s head coach Joey Martinez informed Mendoza that he had earned an opportunity to wrestle off against sophomore Eric Sanchez because the team would be taking two grapplers to the tourney as they remained competitively close in ability.

“I can’t wake up every day and be OK with someone being in front of me. If someone is in front of me, I’m definitely working to get to their level or past them. That’s the type of competitor I am,” the 21-year-old student-athlete with a 3.6 grade point average admitted.

Sanchez had defeated Mendoza by a single point to take over the No. 2 spot about a month earlier. This time, Mendoza won the second spot decisively and as a result of his disciplined and grinding drive to be ready to perform when needed, he would have a chance to participate in the post season.

Growing up and rising through the ranks of the Little Grapplers and Victory wrestling clubs on his way to becoming an elite hometown athlete, Mendoza’s collegiate accomplishments have taken hold on a new group of Grizzly competitors.

“I hope to be a good role model to the younger people back home because I do know they keep track of me and representing Sunnyside in a good way, it’s a good thing,” he exclaimed. “And they’re rooting me on as well. Even the coaches, coach Paulus and coach Moyer. It’s pretty cool to see the love and support I get. It definitely helps!”

Mendoza’s journey to the San Francisco Bay area has been a long ride. He attended Columbia Basin College during his first year out of high school. He accepted a wrestling scholarship and transferred to Highline Community College in Des Moines, Wash., and earned an Associate of Arts degree two years later.

When he arrived at the Menlo campus on scholarship for the 2019-20 school year, his focus was on becoming a national champion while pursuing a Management Major and Bachelor of Science in the Real Estate Degree Program.

The new guy on the team recognized he had to prove himself amongst the tough practice room of successful wrestlers. “There’s no days off here or you’re going to get beat up!”

That wasn’t going to be an easy undertaking. Not at this level and especially on this team. The ongoing competition is relentlessly fierce and unapologetic.

“The way I was looking at going into it was that I put in so much work this year and I did everything I could do and if things didn’t fall into the right place, there wasn’t much else I could do. Like I said, it gets you ready for life. You prepare for something that you want and if you come up short, you have to be ready to take it like a man and just have good character.”