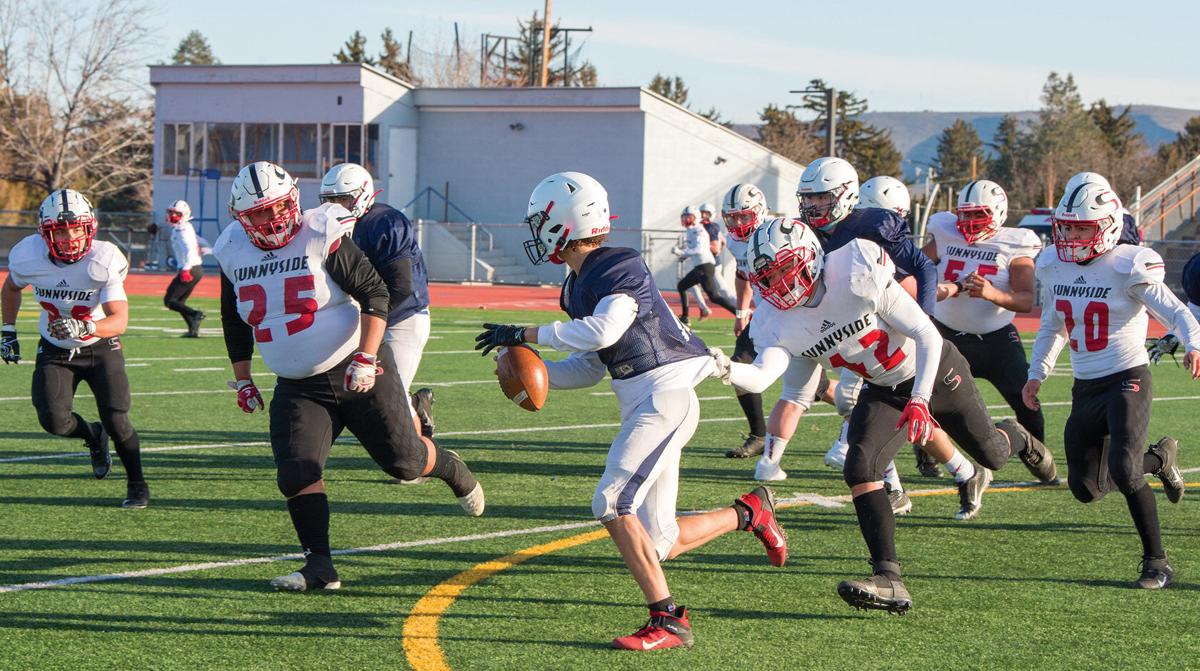 Eisenhower’s quarterback attempts to scramble out of the collapsed pocket as the Grizzlies’ defense bears down in the first scrimmage during Saturday’s jamboree at Zaepfel Stadium. 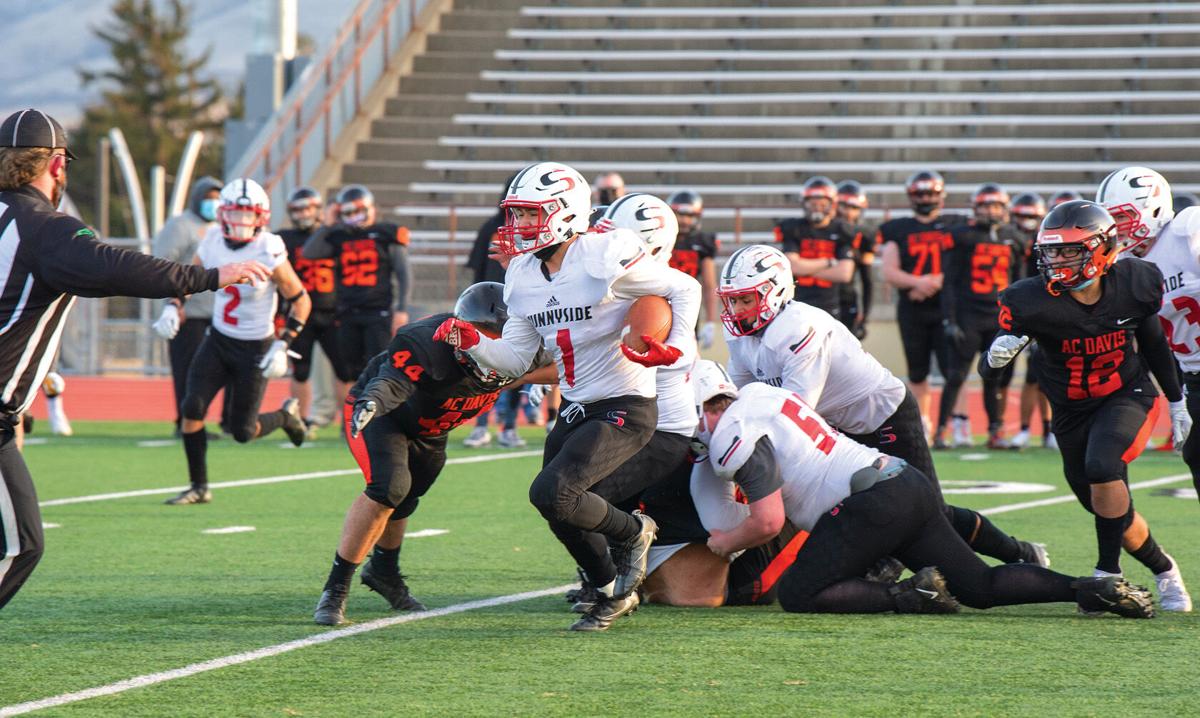 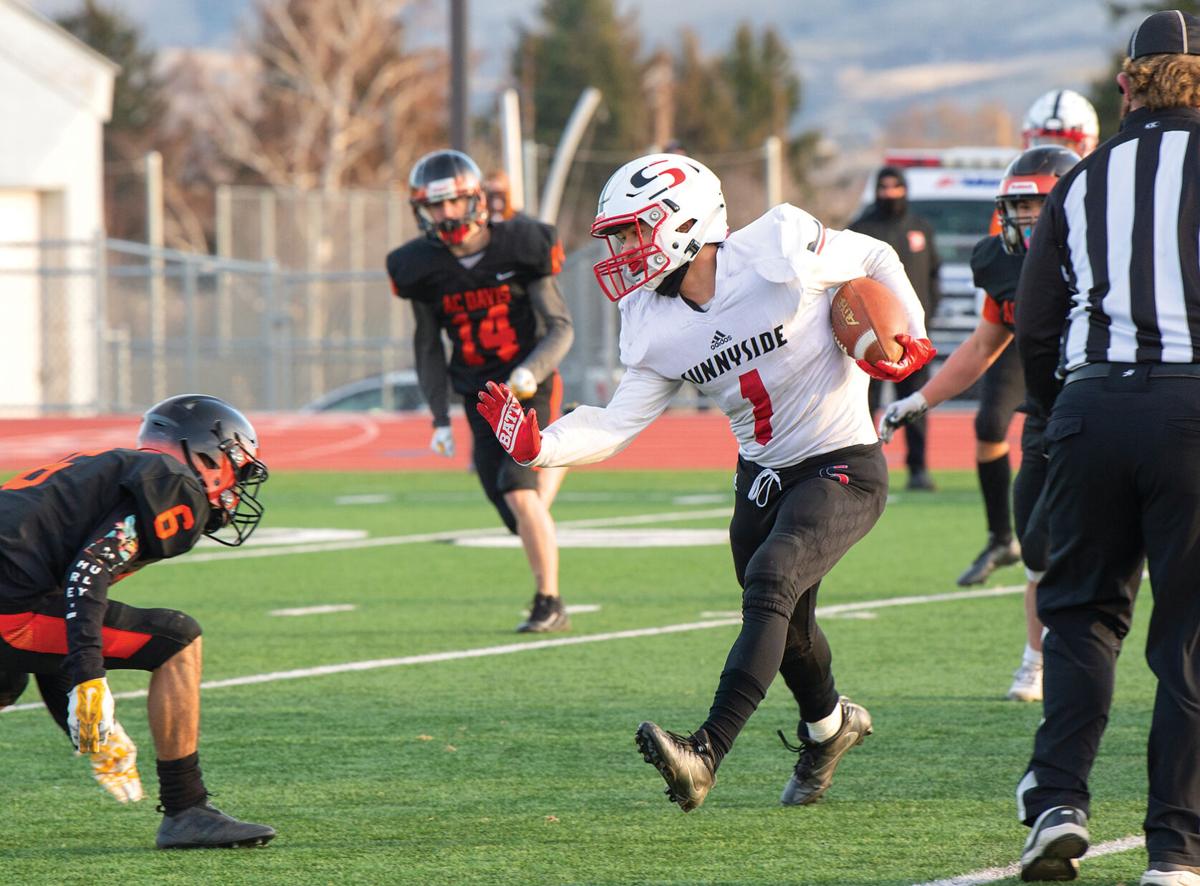 SHS junior running back Devin Escamilla prepares to stiff arm the Davis defender while flashing his deceptive football speed for a huge gain. 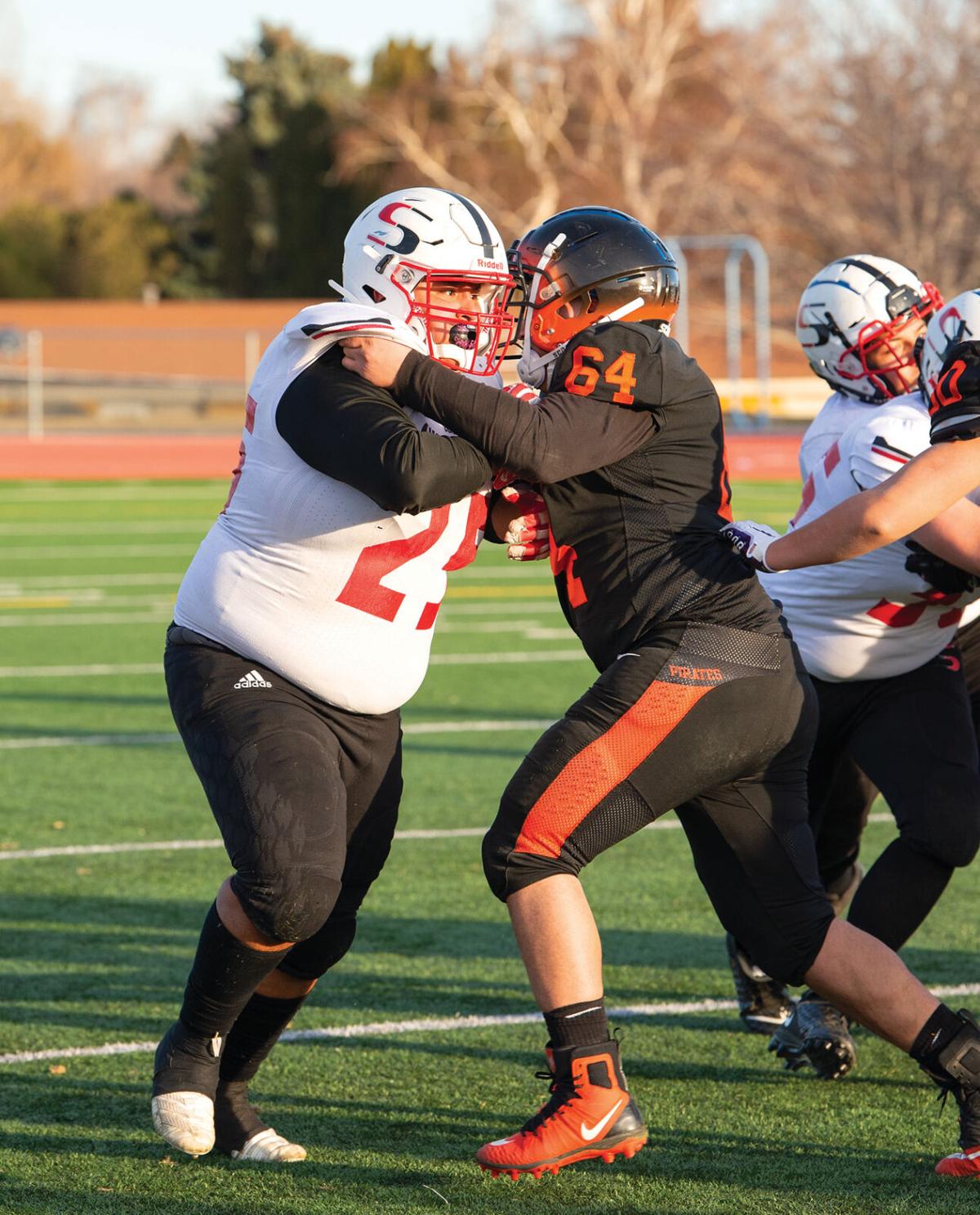 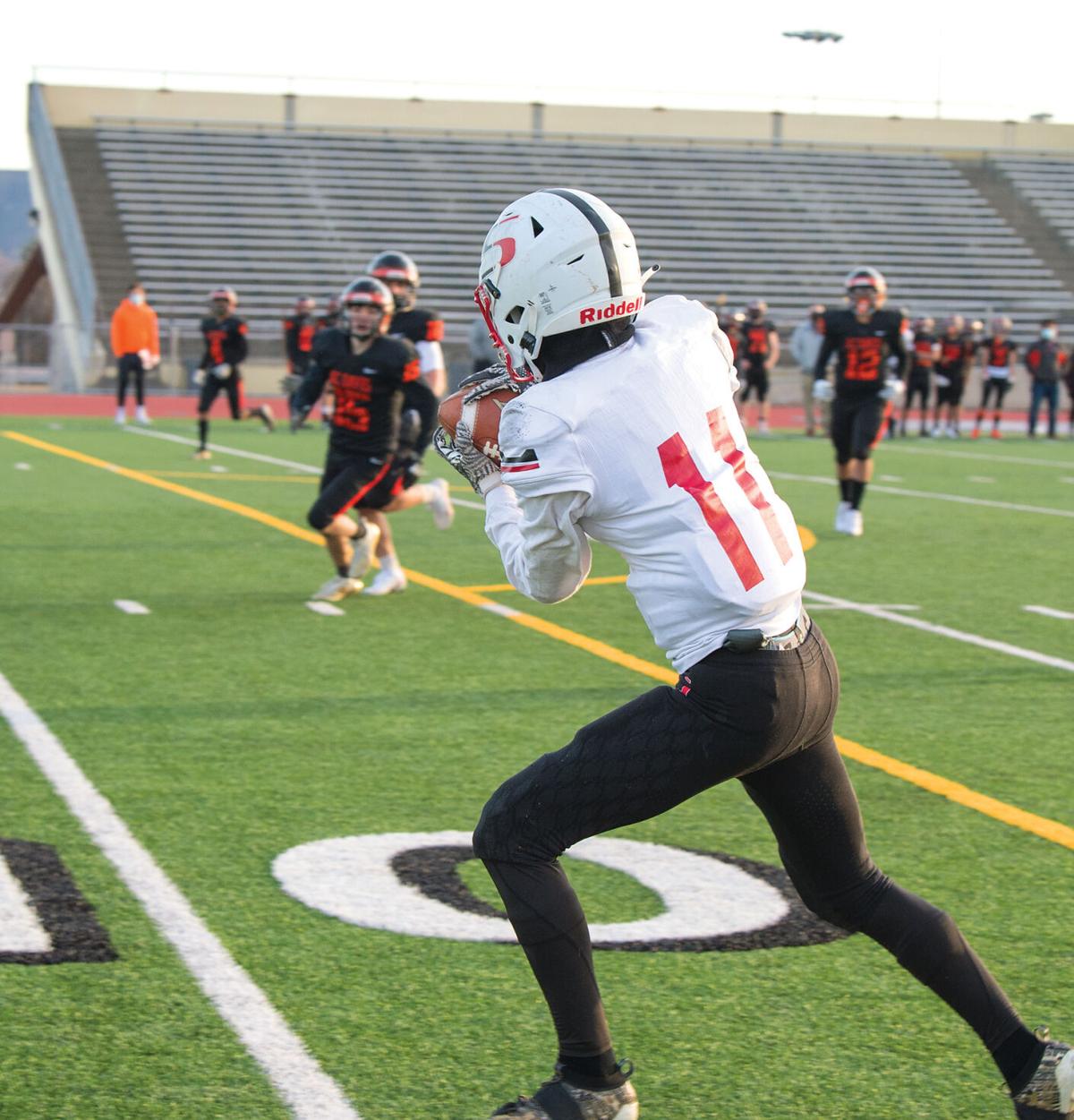 Eisenhower’s quarterback attempts to scramble out of the collapsed pocket as the Grizzlies’ defense bears down in the first scrimmage during Saturday’s jamboree at Zaepfel Stadium.

SHS junior running back Devin Escamilla prepares to stiff arm the Davis defender while flashing his deceptive football speed for a huge gain.

Dominating defensive and explosive offensive performances by the Grizzly varsity football team provided coaches and players with an on field confidence their program is ready to compete following their 30-minute scrimmages against Eisenhower and Davis High Schools during the jamboree at Zaepfel Stadium on Saturday, Feb. 27.

“We played good for the most part. On both sides of the ball, there were a couple of small things that upset me, but we did pretty well,” Sunnyside High School Head Football Coach John Lobbestael stated.

Teams ran about 20 offensive and defensive plays from the opposing squad’s 30-yard line simulating a game like environment, which also included an officiating crew. There were no first downs gained or any scoreboard stats collected.

“It felt good to be out here, a different type of intensity and we were just focused and ready to go,” junior quarterback Logan Rodriguez described.

Fans were not allowed inside the stadium due to COVID-19 health protocols but that didn’t stop them from cheering in the parking lot above the field as spectators stood tall in the bed of pickup trucks and behind the chain link fence.

Once the players took to their respective sidelines, helmets secured, pads adjusted and uniforms squared away, the first of two scrimmages began with Sunnyside taking on Ike at 4 p.m.

The Grizzlies defensive line pushed Ike’s offensive front around throughout the matchup. They controlled the line of scrimmage and were able shutdown the Cadet’s rushing game.

When Eisenhower’s quarterback received the snap in the shotgun formation and dropped back to pass, he was confronted with an immediate surge of pressure and forced to scramble out of the collapsed pocket. He tried to escape the relentless rush and throw on the run, which resulted in a high percentage of well defended and incomplete passing attempts.

“The defensive line was looking good. There were only a couple of good runs, so overall I’m really happy,” Lobbestael voiced.

The aggressive and speedy secondary made plays on the back end while the attacking defense was in sledgehammer mode and limited the Cadets to a couple of meager running gains and pass receptions.

At 4:30 p.m. Davis lined up and went head on with Sunnyside. The Pirates opened up with their offense and the Grizzly defense picked up where they left off with their initial brand of bearing down with a booming intensity of disruptive chaos.

As the Pirates’ offensive front were being bull rushed by the Grizzlies’ D-line and pushed back on their heels, Davis attempted to double team any pass rusher on the left side of the nose guard.

Despite those efforts, the defensive momentum could not be slowed down and on cue, ignited Sunnyside’s explosive and multi-threat offense when they took the field.

The fast-pace attack was carried out in tandem with dual threat junior running backs Devin Escamilla and Myles Newhouse. Both have blazing on field speed and are fearless after defensive contact with the ability to power through tackles for big gains.

“This year I’m experienced, and nothing is going to stop me from getting to where I want to be and that’s 6-0 with this team,” Escamilla excitedly communicated after making a series of impressive runs, which drew accolades from coaches and players.

“Devin Escamilla is a savage. I mean we didn’t block particularly well a couple of times, but he is going to make a lot of plays like that where he is bouncing all over the place, he’s crazy. So, I’m excited for him.”

The dynamic running game opened up the passing attack and sophomore wide receiver Brent Maldonado showed off his play catching and running abilities as he connected with Rodriguez for a 30-yard catch and run on the final play of the jamboree.

“I knew the ball was coming my way and Logan just put it on the dot right there,” Maldonado recalled. “It felt good to be back! Once I caught it, I knew I was going to get in the endzone. It was just a good way to start of our season.”