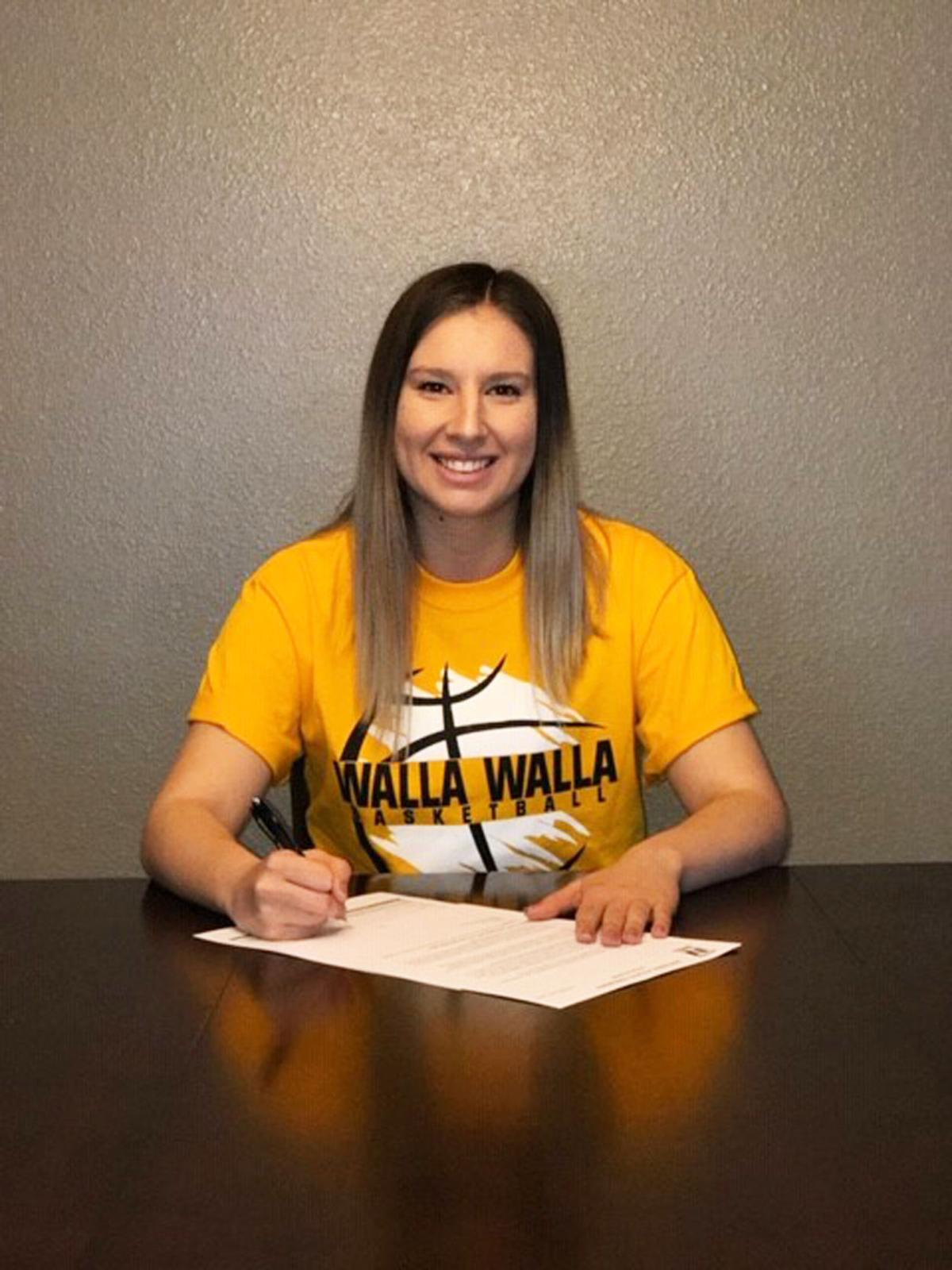 WALLA WALLA COLLEGE BOUND — Sunnyside High School senior Kameran Rodriguez signs her letter of intent to play for the Warriors with plans to study marine biology in the fall on Wednesday, April 1. 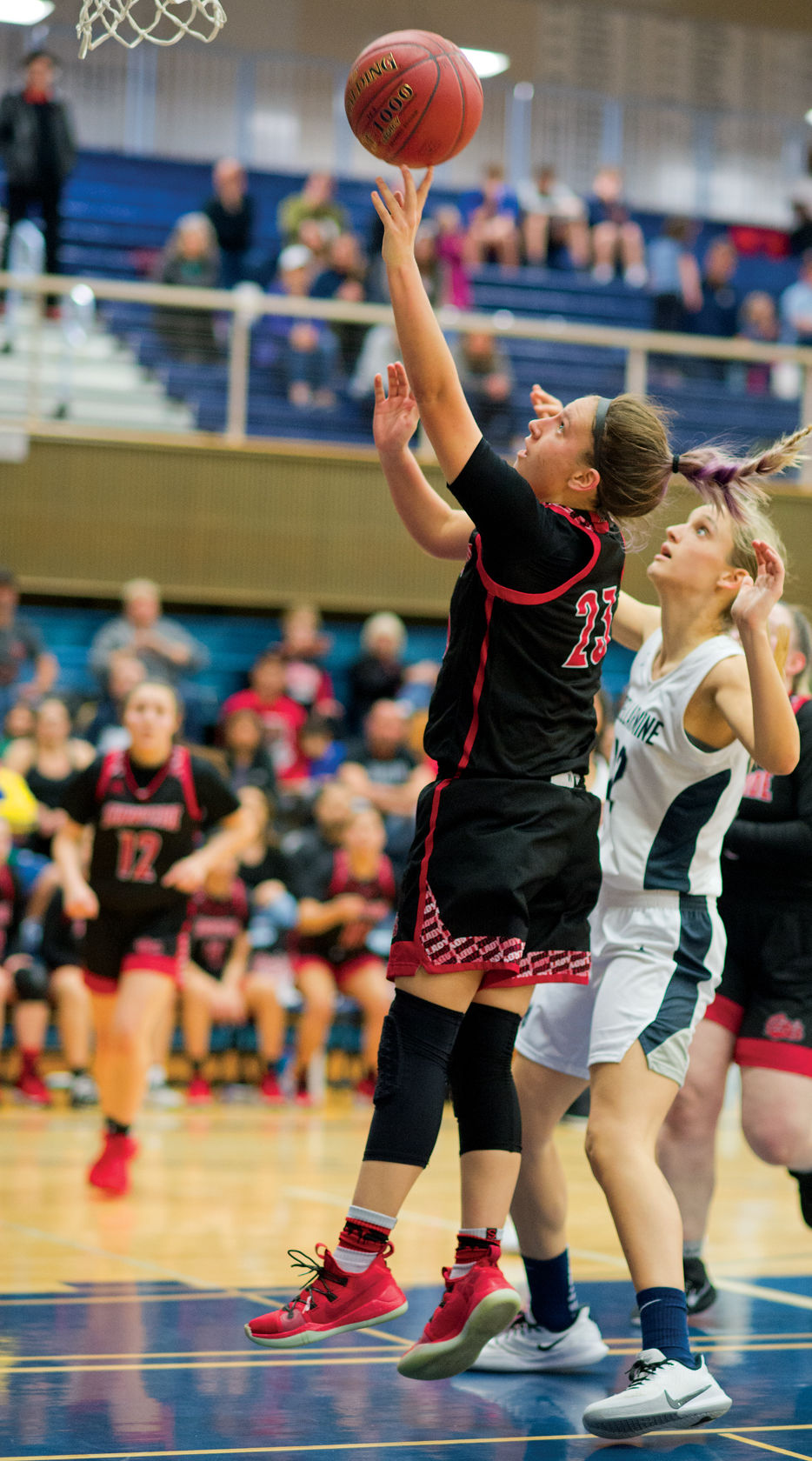 WALLA WALLA COLLEGE BOUND — Sunnyside High School senior Kameran Rodriguez signs her letter of intent to play for the Warriors with plans to study marine biology in the fall on Wednesday, April 1.

SUNNYSIDE — Senior girls basketball player and two-time CBBN first-team forward Kameran Rodriguez took a break from her yard work chores to announce she signed a letter of intent to attend Walla Walla Community College in the fall on Wednesday, April 1.

“I’m very excited,” Rodriguez expressed as she recalled watching her older sister Jordan play in college, while captivated by the electrifying environment – pledging to herself that one day she would be playing at the next level.

“I feel more excited than nervous but definitely ready to take my game there,” the incoming Warrior stated, who’s been playing hoops since she was six years old.

Rodriquez explained that basketball is her family’s sport which has always been important for the insightful 17-year-old because it’s a part of life they can all share in together, both on and off the court.

“As I grew older and older, it was just something I loved more and more. It always makes me want to work harder and get better,” she expressed. “To be the best I can be every day, and that’s not just in basketball. Like anything in life and school.”

The stretch two guard and small forward acknowledged how special her Junior season was when the Lady Griz went undefeated in league, while winning the 2019 Big 9 Conference and District Championships, earning a memorable trip to the Hardwood Classic at the Tacoma Dome.

“They saw what AAU team I was on over the past summer and came out to a couple of tournaments we were at,” the 5-foot-6-inch floor leader shared. They stayed in touch with her during the 2020 campaign as the left-handed sharpshooter led the team in scoring and averaged 17.8 points.

The four-year Sunnyside varsity member said her ball handling and shooting guard duties will be used in a similar role for the Warriors, along with the request to wear No. 23 has been made.

This season, the Warriors (15-1, 26-2) won the Northwest Athletic Conference East Region title but their post season was canceled due to the COVID-19 pandemic. In 2018 they won the NWAC Championship after posting a 32-1 record.

“It’s well deserved for all of Kameran’s dedication in time and effort that she’s put into the sport but also for her education,” SHS Head Coach Rick Puente voiced. “She works just as hard in the classroom as she does on the court.”

Before she can attend Walla Walla with an academic interest in marine biology, Rodriguez is presently focused on completing high school and starting online college classes at Central Washington University, prior to Gov. Jay Inslee extending the Stay Home – Stay Healthy order to May 4.

“In the situation we’re in, Kameran understands she has to get some things done. She’s a go-getter in whatever she does and will stay dedicated to accomplishing her goals and getting through her senior year,” Puente confidently described.

Rodriguez conveyed she was more distraught for Grizzly spring sports athletes than herself because there were Seniors unable to participate in their final year of high school competition, many of whom are her friends, were crying their eyes out.

Now, there’s a real possibility that school may not comeback until the fall – she and her 2020 classmates are socially plugged in and aware of what’s going on around them while maintaining a safe distance apart from each other.

They also genuinely recognize the pageantry of their final year at SHS might be gone as well – no prom festivities, follies events or graduation celebrations to attend which help make a yearbook of senior memories more spirited when pausing to reflect.

“Every day, my brother (Logan) and I come out and practice, we’ll work on ball handling. And when it’s not extremely windy like it’s been, we’ll put up shots up, making sure I’m staying active,” she reported. “I plan to be in shape and ready to go, because who knows for sure how long this quarantine is going to last.”