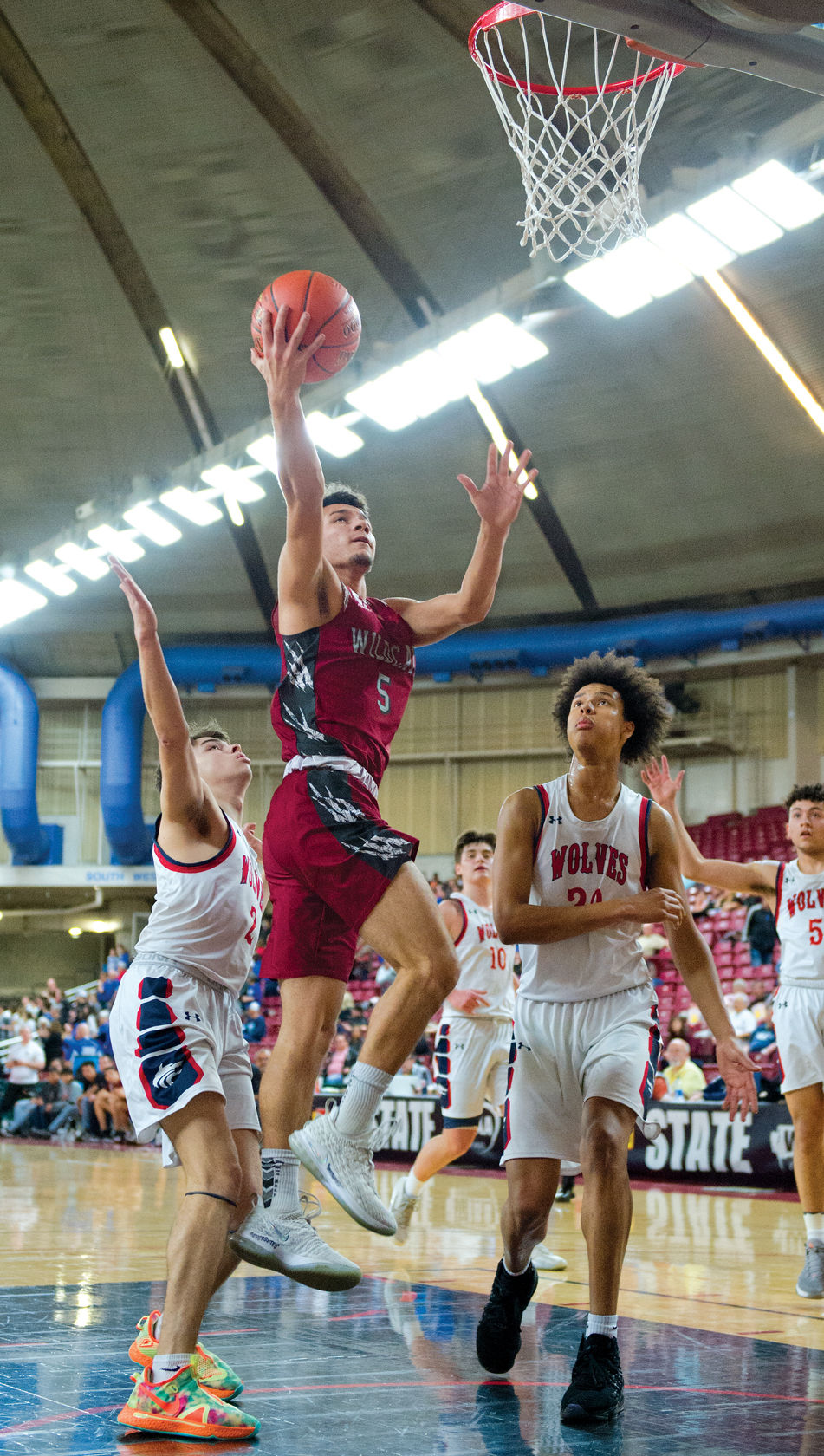 BIRTHDAY BASKET — Senior Isaac Perez scores a second half bucket on his way to a team high 19 points against the Black Hills Wolves during the 2020 WIAA Class 2A Hardwood Classic on Saturday at the Yakima SunDome. The point guard celebrated his 18th birthday on the court and earned first team all-tournament honors. 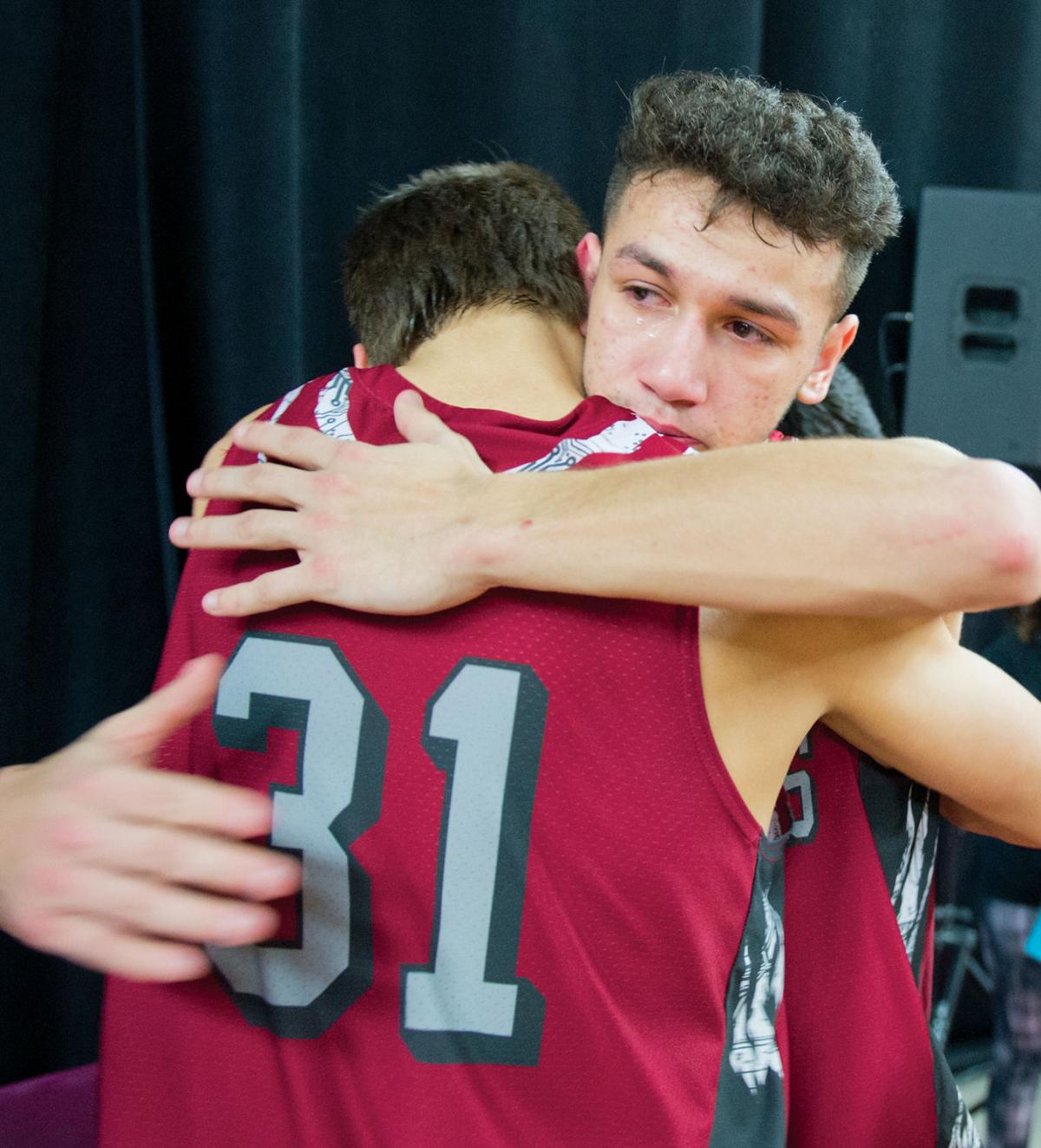 EMOTIONAL ACHIEVEMENT — Isaac Perez gives sophomore Jason Grant a heartfelt hug following their sixth place finish and their best state finish since 1992. Perez and Grant both acknowledge their love of playing basketball together while growing up on the hardwood. 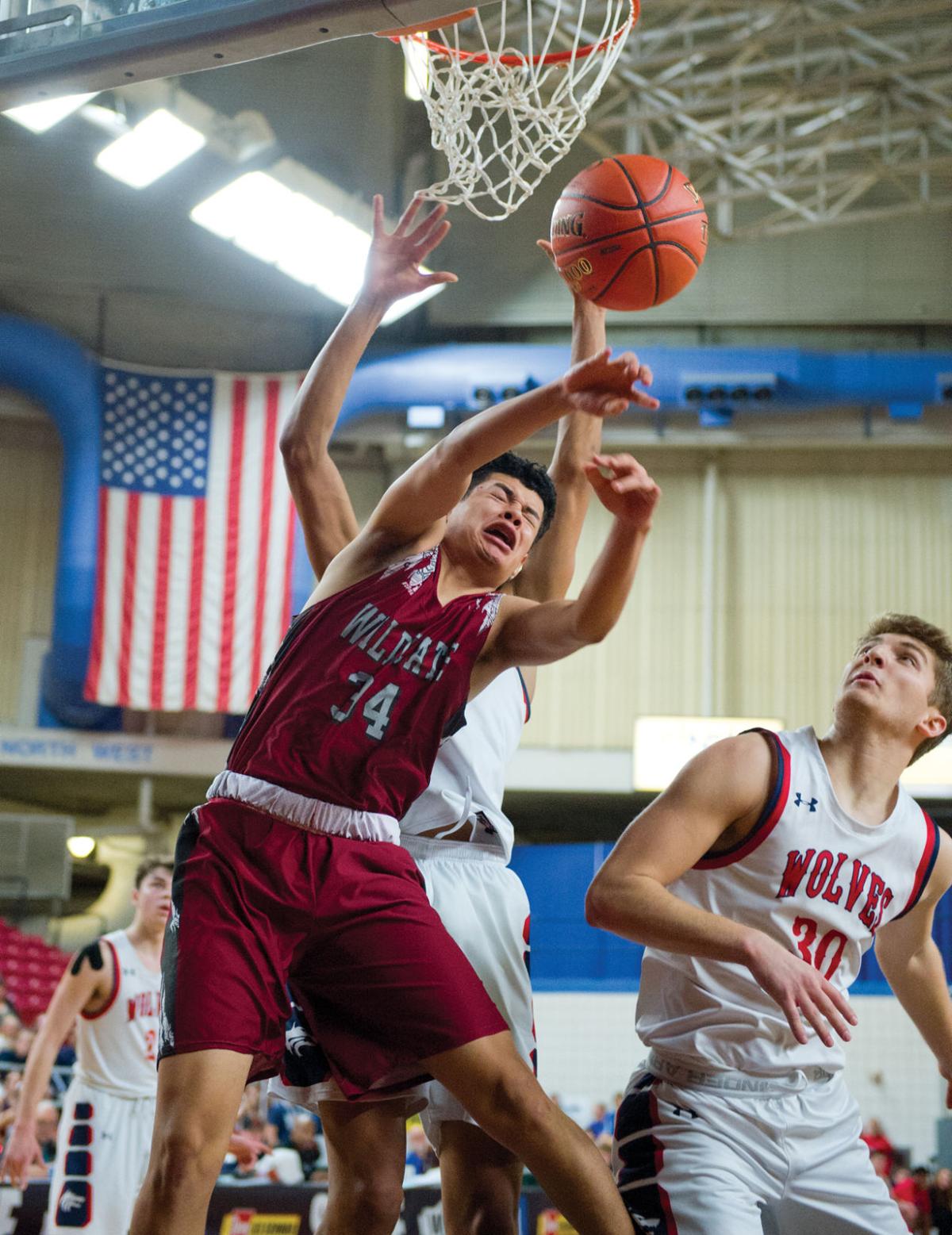 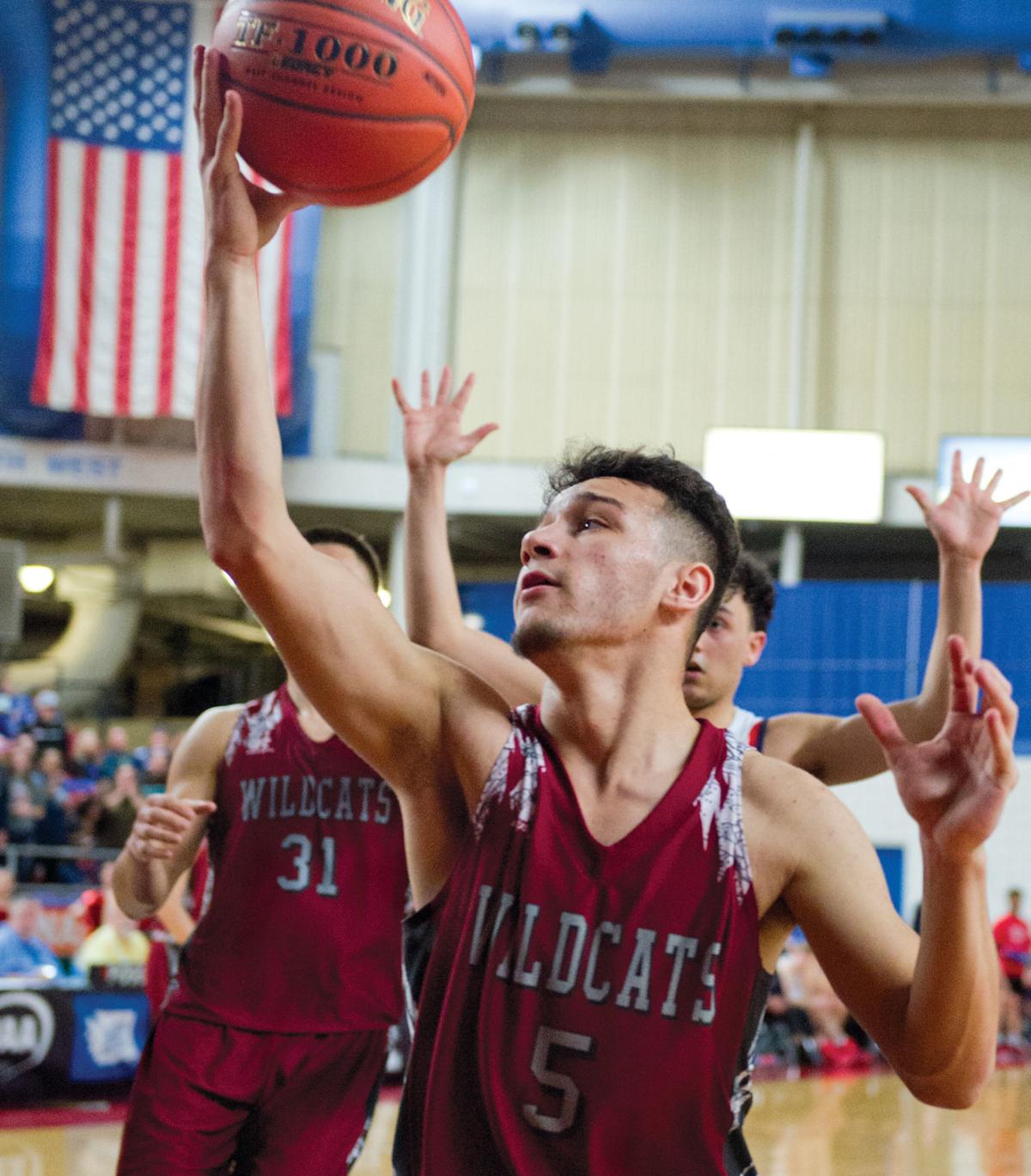 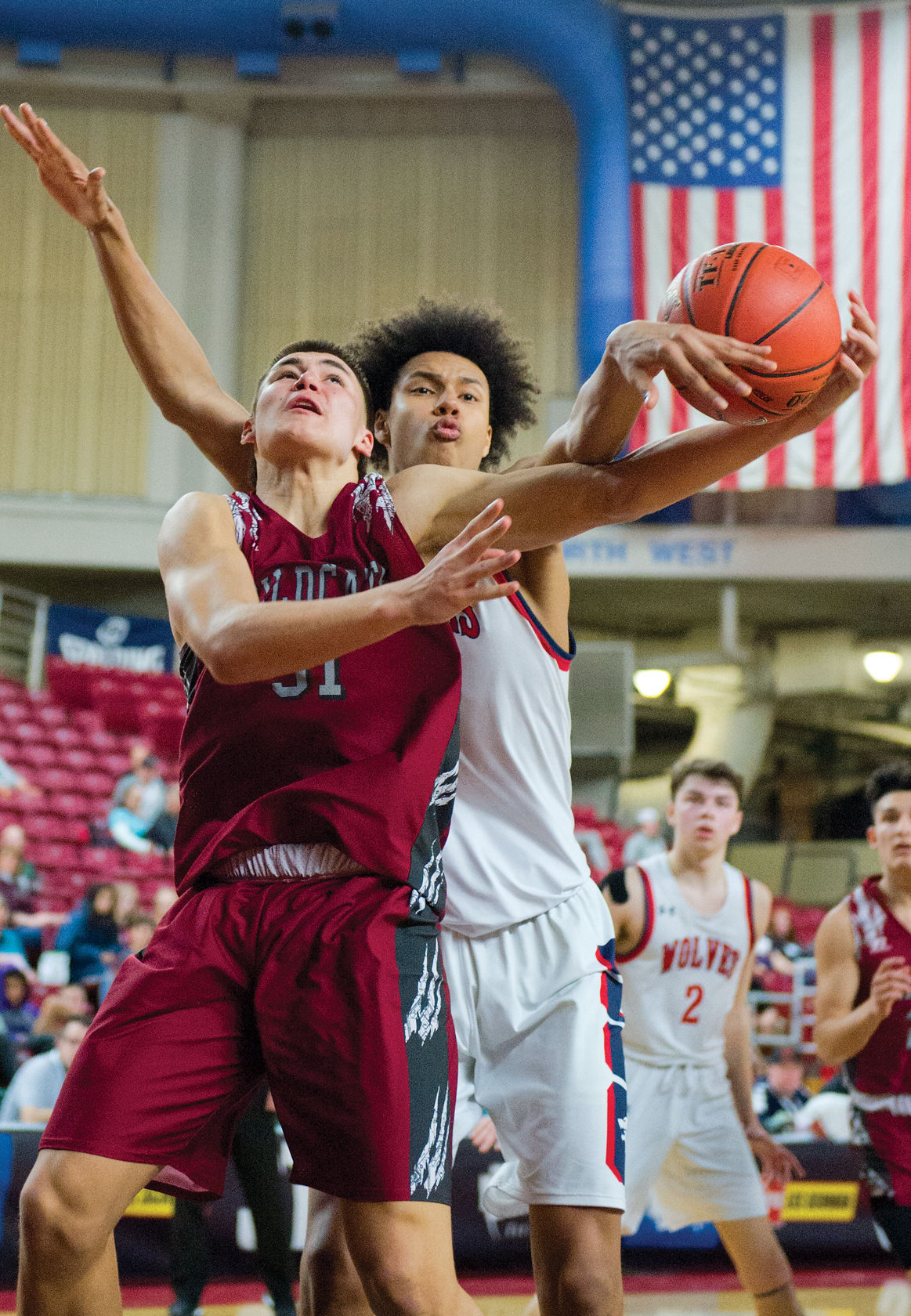 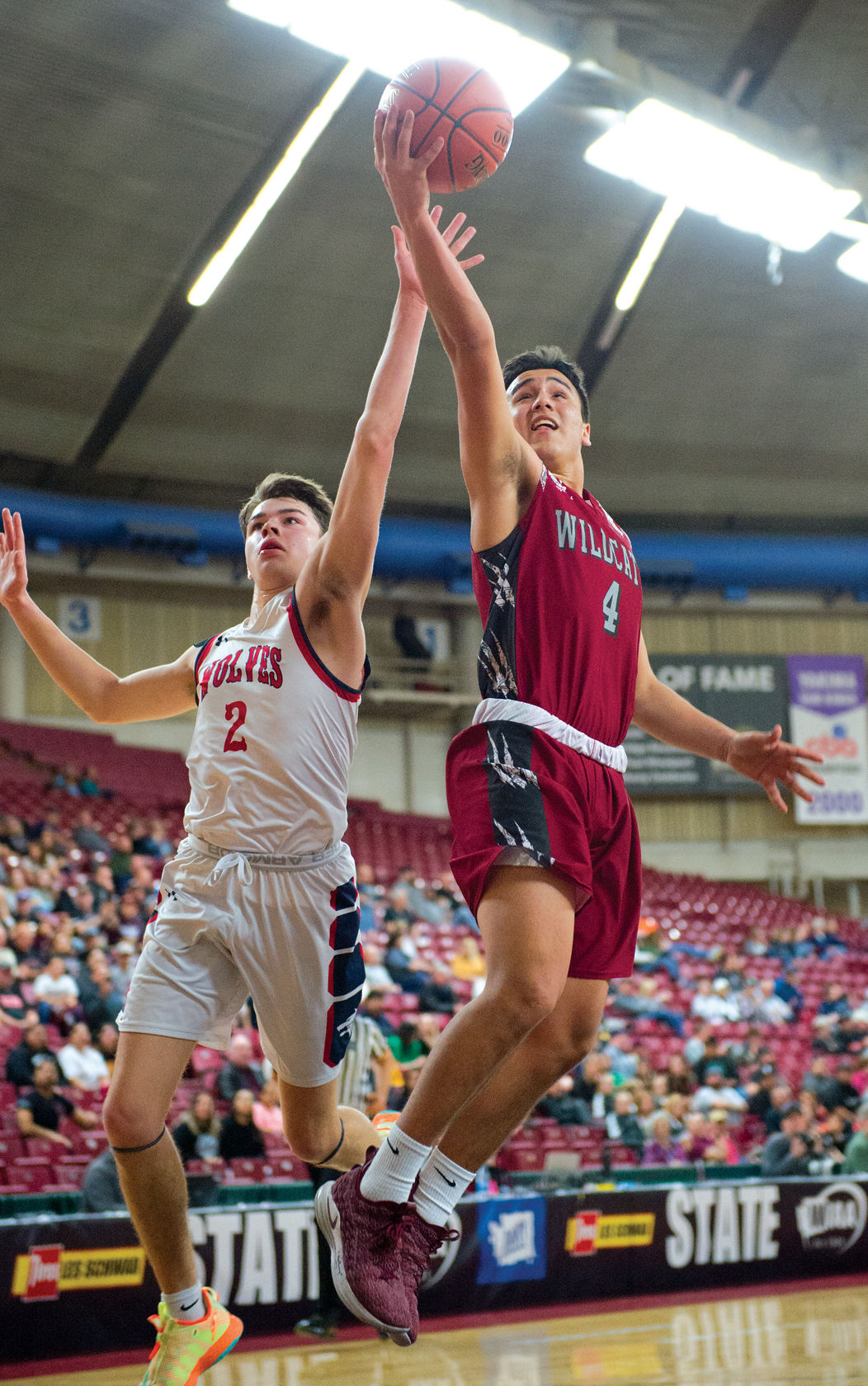 BIRTHDAY BASKET — Senior Isaac Perez scores a second half bucket on his way to a team high 19 points against the Black Hills Wolves during the 2020 WIAA Class 2A Hardwood Classic on Saturday at the Yakima SunDome. The point guard celebrated his 18th birthday on the court and earned first team all-tournament honors.

EMOTIONAL ACHIEVEMENT — Isaac Perez gives sophomore Jason Grant a heartfelt hug following their sixth place finish and their best state finish since 1992. Perez and Grant both acknowledge their love of playing basketball together while growing up on the hardwood.

YAKIMA — The magic of sports can sometimes transcend the final score and when it does, a team’s purpose becomes bigger than the game itself — the Toppenish Wildcats experienced such a feeling as they celebrated their sixth place 2020 WIAA Class 2A Hardwood Classic trophy with an honored community of cheering fans Saturday morning.

“It went beyond basketball and I believe that,” senior Isaac Perez proudly affirmed as he departed the visitor’s locker room following their 63-58 game loss against the Black Hills Wolves March 7. “It was more than just a game — that was something for our community and why I haven’t cried like this in a long time!”

Perez celebrated his 18th birthday with his extended Wildcat family while hugging teammates and soaking up the big stage moment at the northeast section at the SunDome. Tears of emotions were transformed into triumphant smiles when the celebratory party began to sing in unison, “happy birthday” to the class president.

“This bunch of young men I feel have done more than just basketball for our community,” Toppenish coach John Mesplie confidently expressed, despite his exhausted voice after four straight tournament games. “This is one year I think they just really made our community a lot more tightknit and coming together. They’re a special group.”

The Wildcats began their fourth game in as many days with a strong commitment of pushing the ball up the court after a made basket or securing a defensive rebound. Their up-tempo offense assisted in negating the Wolves’ height advantage and at the end of the first quarter, they led 15-12.

By halftime, their aggressive play continued to pay dividends as Toppenish went to the free throw line 12 times, making seven foul shots for 58%. Black Hills hit four of four from the line as they took a 32-30 lead into the break.

Perez connected on 3 of 7 from the field, 4 of 6 free throws, 3 steals and 4 rebounds. His brother, freshman Joshua Perez tipped in 8 points on 3 of 6 shooting, including one of four from behind the 3-point arc, 1 of 2 free throws and 3 boards.

Coach said he was extremely proud of his upperclassmen Perez, Felan, Ramirez and Nick Garza, for helping to create the program’s high achieving culture by their strong leadership and academic accomplishments. He credited them for being role models to the five sophomores and one freshman who rounded out the team.

Tied at 39 with 5:23 remaining in the third quarter, Perez and his younger brother knocked down consecutive 3-point field goals, sophomore Mario Larios scored a field goal and Grant added one free throw as the Wildcats went on a 9-2 surge and led 48-41.

Black Hills senior Avery Armin closed out the last 1:03 of the quarter with seven unanswered points of his own to even the score at 48.

Halfway through the fourth quarter and with the pace tightening up, Toppenish clung to a 52-51 lead. The Wolves’ six-foot-six junior Justin Hicks scored seven straight points to reclaim control of the game and led 58-55.

On the subsequent trip down the floor, the Wildcats would regain their poise as five-foot-nine Felan crashed the offensive glass, secured the rebound and powered his way back up to the basket for a field goal and foul. His three-point play tied the game at 58 with 2:04 left.

36-seconds later, six-foot-three senior Weston Ainsworth put Black Hills up for good with a basket. Toppenish had a chance to tie the game on their next trip down the floor but were unable to get a friendly bounce as the ball rimmed out from point blank range.

The Wolves grabbed the rebound and immediately called timeout. Toppenish fouled on the inbounds play. After sinking one of two free throws, the Wildcats were down 61-58, still a one possession game and signaled a timeout with 28.4 remaining.

Perez received the ball at the top of the circle and proceeded to drive around the left side of the paint where he was able to get past the initial defender at the free throw line and cut toward the rim. As the point guard began to elevate with both hands on the ball above his head, Hicks slid over to meet Perez, who initiated contact into the chest of the shot blocker.

The Wolves’ post player went up in a vertical manner with his outstretched wingspan contesting Perez’s field goal attempt. The officials allowed the players to decide the outcome of the game and no foul was called as the ball was unable to find the bottom of the net on multiple attempts.

“It’s a great day to be a Wildcat! This was just an amazing season from beginning to end,” Athletic Director Brett Stauffer exclaimed. “It’s one of the best groups of talented boys that we’ve had in the school’s 100 year plus history.”

Sophomore Jason Grant wasn’t trying to hold back his outpouring feelings for his teammates as he walked off the floor, rather he was trying to find the right words of what they meant to him.

“I’m going to really miss them. It’s different with these guys, I don’t know why. They’re special! I’ve known these guys my whole life. I’m speechless. I can’t put it into words,” Grant poetically expressed as tears reaffirmed his candor.

YAKIMA — No. 2 Toppenish met CWAC rival No. 10 Prosser for the fourth time this season and defeated the Mustangs 64-60 in a loser-out game, Wednesday, March 4.

The Wildcats stepped up their defensive intensity and took control in the fourth quarter and held Prosser to 12 points.

Seniors Isaac Perez posted a double-double with 18 points, 16 coming in the second half to accompany his 11 rebounds, while Matthew Ramirez splashed in 15.

Sophomore Jason Grant delivered 13 points and 11 boards for a double-double of his own as the Wildcats handed the Mustangs their third loss in four previous matchups.

The Mustangs were led by junior Haden Hicks, who finished with 21 points, 15 in the second half. Senior Calvin Maljaars scored 10 and pulled down seven rebounds.

Toppenish faced No.1 and two-time defending champs Lynden on Thursday night, March 5, and were able to get off to a fast start which caught the Lions’ attention for applying their athletic length to slow down the Wildcats.

“None of our outside shots really fell but even our full court pressure never got us anything to kind of build on,” Toppenish coach Joseph Mesplie stated following the team’s 73-55 loss.

By the end of a fast pace 12-9 first quarter, the Wildcats attack caused the Lions to get back to their dominant style of basketball – rebounding and high percentage offensive shooting to take charge of the momentum.

“There were some opportunities in transition which I felt we didn’t take advantage of and that’s something we did talk about. Getting rebounds and looking to push with the pass first,” coach said. “We would have guys ahead but then we were reluctant to get the ball out of hands and up the floor.”

The Lions relied on their tournament experience and team discipline to take a 32-24 lead into halftime. They shot 13 of 25, 52% from the field and made five of six free throws, 83%.

Their first half defense held the Wildcats to 10 of 26 shooting, 39% and hitting two of three free throws for 67%.

“For me, it’s all about positioning. It’s a big part of my game,” sophomore Jason Grant, who finished with 12 points in the post explained. “If I’m in the right position, I’m making the right play.”

At the end of the third quarter, the Wildcats were in position to threaten the Lions’ 47-37 lead going into the final period.

Halfway through the fourth, Perez knocked down a 3-pointer to cut Lynden’s lead to 60-48.

“We got the lead down and just kept believing in ourselves that we’re going to make a run,” Perez conveyed after he scored a team high 16 points.

The Lions 40-14 rebounding advantage and size down the stretch proved too much for the Wildcats to overcome.

“I’m proud of our team, we fought all 32 minutes,” Perez acknowledged. The tournament isn’t over for us, we have a game tomorrow. We win that one, we’ll extend our season by another game.”

Toppenish maintained their poise and rebounded to defeat No. 5 White River 71-57 on Friday to advance to the medal round for fourth and sixth place.

No. 3 North Kitsap won in dramatic fashion 56-53 over No. 7 Clarkston for their first state championship on Saturday afternoon in the SunDome.

Sophomore Jonas La Tour poured in a team-high 21 with 11 rebounds and teammate Kobe McMillian added 17 as the Vikings held off the Bantams for the title.

North Kitsap finished the season 24-4 and knocked out top-seeded defending champion Lynden 62-56 in route to its 4-0 run through the Class 2A state tournament.